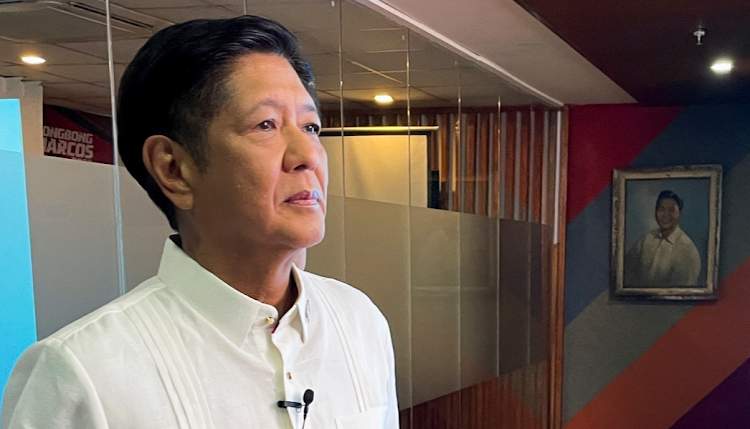 Ferdinand Marcos Jr prepares to speak to foreign correspondents, including Reuters, two days after clinching a landslide victory in the Philippines presidential election, based on an unofficial tally of votes, at his headquarters in Mandaluyong City, Philippines, on May 11 2022. Picture: REUTERS/NEIL JEROME MORALES

Relations between the Philippines and China will become stronger under the Southeast Asian country’s incoming president, Ferdinand Marcos Jnr, China’s ambassador to Manila said on Thursday.

Marcos, son and namesake of his country’s former dictator, won an election this week by a landslide. This victory that could reshape his country’s ties with China and the US.

China was looking forward to working with the new government to upgrade co-operation, ambassador Huang Xilian said in a Facebook post.

Marcos has long-standing ties with China and is seeking a new deal with Chinese President Xi Jinping on the contested waters of the South China Sea.

The Philippines is pivotal in the rivalry between the US and China. Its maritime territory includes part of the South China Sea, a strategic and resource-rich waterway over which China also claims sovereignty.

The Philippines is a long-standing treaty ally of the US, but the Marcos victory could hit US efforts to push back against China.

The relationship Marcos has had with the US has been complicated by a contempt-of-court order for his refusal to co-operate with Hawaii’s district court, which in 1995 ordered the Marcos family to pay $2bn of plundered wealth to victims of the elder Marcos’s rule.

Kurt Campbell, the White House co-ordinator for the Indo-Pacific, said on Wednesday the US was seeking early engagement with the Marcos administration, but historical factors meant there would probably be “some initial challenges”.

US President Joe Biden called Marcos to congratulate him on his victory and said he looked forward to strengthening their alliance, the White House said.