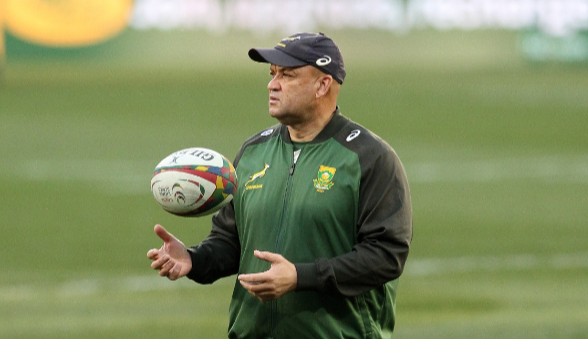 SA assistant coach Deon Davids says the team are happy with the way the match officials handled Saturday’s 27-9 victory over the British & Irish Lions and hit back at those who have said the Springboks’ forwards-based gameplan was boring.

SA’s director of rugby Rassie Erasmus launched a scathing critique of the match officials after the 22-17 defeat in the first Test, creating an extraordinary 62-minute video that is likely to earn him severe punishment from World Rugby.

It included the accusation that Springbok captain Siya Kolisi had been disrespected by referee Nic Berry, and not treated in the same manner as his Lions counterpart Alun Wyn Jones.

Davids said he believes there was a vast improvement from the officials in the second Test, refereed by New Zealander Ben O’Keeffe, but did not know if Erasmus’s tirade played a role.

“I can’t comment on whether it was as a direct result, but all I can say is that we are quite happy in how certain areas of the game that we highlighted were refereed this week,” Davids told reporters on Monday.

“There was good communication between the referee and the captain throughout the game, and we were able to express ourselves in the way that we want to and play the type of rugby that we feel is our strength.”

The Boks used their forwards dominance to bully the Lions into submission in the second half. New Zealand coach Ian Foster said on Monday the style of both teams “put me to sleep”, with the Boks having been labelled as “boring” in the past.

“I was not with the team then, but the same narrative was there when the Boks won the [Rugby] Championship in 2019. It was the same when they won the World Cup,” Davids said.

“There is always a plan behind everything. When we execute stuff it is not about being ‘boring’, it is about understanding what we want to achieve. In doing that, we created enough opportunities to play with the ball in hand and score tries. I believe in our approach and where it leads us to.”

The Boks are sweating over the fitness of flanker Pieter-Steph du Toit, scrumhalf Faf de Klerk and No 8 Duane Vermeulen for the series decider on Saturday. Davids confirmed their availability would be known on Tuesday.

If Warren Gatland gets to making a video of the Rassie sort, it will be of nothing more than a clock ticking, as it did in the first half of 63 ...
Opinion
10 months ago