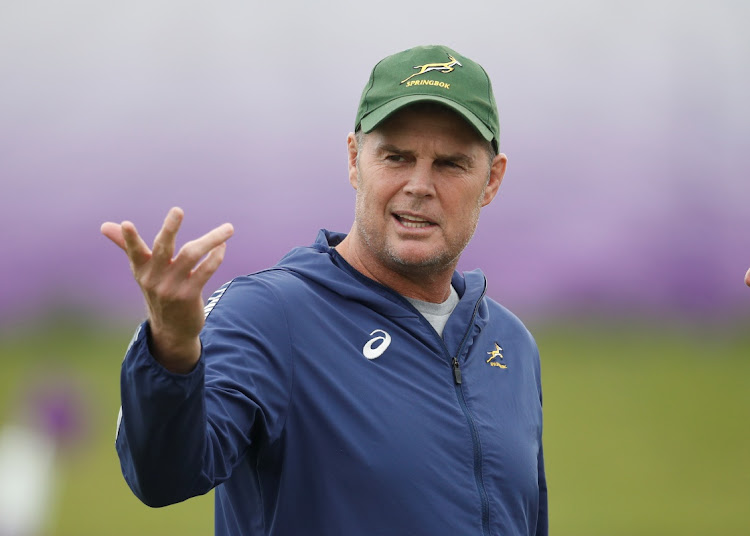 In an atmosphere turning increasingly acrid, Rassie Erasmus says he will quit his role on the Springboks coaching staff if asked to do so.

SA Rugby’s director of rugby said in an extraordinary 62-minute recorded monologue he will step aside if it means the last two Tests in the series between the Springboks and the British & Irish Lions will be officiated fairly.

Over the past week or so the series has descended into bitter brickbat commentary between Erasmus and the Lions’ coaching staff, and the recording will surely stir already boiling emotions.

In the recording the now irascible Erasmus shows 26 video clips in which he highlights some poor and debatable officiating from the first Test that the Springboks lost 22-17 last Saturday. The former Springbok coach, who has been performing water-carrying duties, also bemoaned what he believes was a lack of respect shown to the home side by the officials.

By criticising the match officials Erasmus may have opened himself to potential sanction from the game’s governing body World Rugby.

“I don’t know where I will be and what the repercussions of this video will be,” said Erasmus. “If you guys request that I am no longer in these Test matches, no problem. If you request that I’m no longer a water carrier, no problem,” he said at the end of the monologue.

Erasmus explained that he had taken to Twitter and recorded the monologue after receiving no clarity on the questions he put to referee Nic Berry.

He said he has used social media to get his point across, because Lions coach Warren Gatland was allowed to voice his concerns, especially around the appointment of Marius Jonker as television match official, in the media.

Erasmus painstakingly goes through the video clips highlighting the officials’ inconsistent application of the law in the first Test.

Erasmus put into sharp focus, Tom Curry’s late tackle on Faf de Klerk, Curry’s side entry at a ruck, Makazole Mapimpi being held back by Elliot Daly, the lack of respect shown to Siya Kolisi by the referee, how shoulder-high tackles were differently interpreted, Duhan van der Merwe lifting Mapimpi and driving him into the ground, inconsistent officiating to players not rolling away at the ruck, Maro Itoje’s illegal steal near the try line and Cheslin Kolbe being tackled in the air and then picked up from a prone position.

Hamish Watson’s tip tackle on Willie le Roux also had Erasmus scratching his head. “I can see nothing less than a yellow card. I have not seen anything like this in the last five years.”

The inconsistent application of the advantage law also raised his ire. “You have to ask whether it is just a mindset?” he said of Berry after a clip that featured eight seconds penalty advantage to the Springboks and 23 seconds to the Lions.

At one point Erasmus exasperates “consistency goes out the window”. He went on to lament: “I don’t know at this level, when you’ve waited 12 years to play a match like this.”

“I believe in fairness, and the system and I believe the two teams must have equal chance of competing in a match. I’m not saying the referee was a cheat at all, I’m saying all we want is clarity. I’m not convinced by the clarity I got from Nic Berry.”

How World Rugby responds may set the course for how officials and members of team management ventilate their grievances and frustrations in future. Whether World Rugby will address his actual concerns is anybody’s guess.

After the debate surrounding the first Test’s crucial decisions, Kiwi ref will have his hands full on Saturday
Sport
1 month ago

Gatland praises Itoje but also gets in a dig

Rassie Erasmus in the spotlight ahead of Test decider