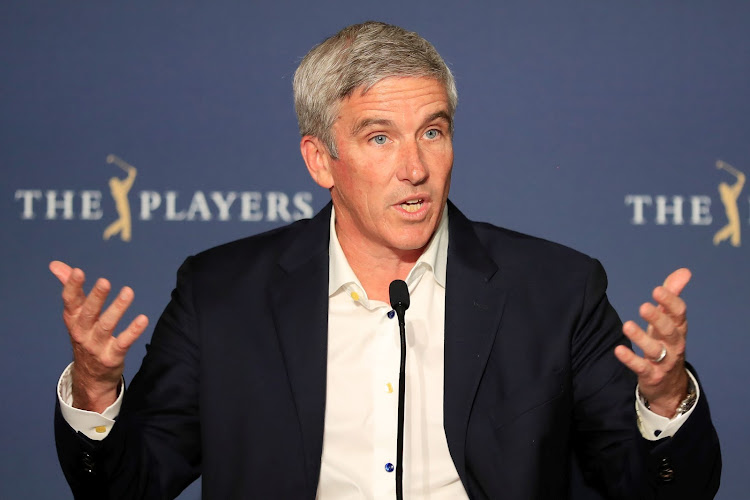 PGA Tour commissioner Jay Monahan accused the Saudi-back LIV Invitational Series of attempting to buy the game of golf then went on the offensive, unveiling larger purses, new events and a different calendar.

Speaking at the Travelers Championship in Cromwell, Connecticut, Monahan conceded that the PGA Tour cannot compete with the LIV Series when it comes to cash but upped the ante by announcing it would increase purses at eight events during the 2022/2023 season to an average of $20m.

Backed for $250m by Saudi Arabia’s Public Investment Fund, the LIV is offering purses of $25m at seven-of-eight events and a $50m prize fund at the series finale to be played in October at former US president Donald Trump’s property in Doral.

If those figures are not startling enough then the astronomical sums dangled in front of golf’s biggest names in an effort to lure them away from the PGA Tour are eye-popping.

Six-time Major winner Phil Mickelson, according to media reports, got a $200m appearance deal to sign on with the rebel circuit and former Masters champion Dustin Johnson $125m.

“I am not naive. If this is an arms race and if the only weapons here are dollar bills, the PGA Tour can’t compete,” said Monahan.

“The PGA Tour, an American institution, can’t compete with a foreign monarchy that is spending billions of dollars in an attempt to buy the game of golf.

“We welcome good, healthy competition. The LIV Saudi Golf League is not that. It’s an irrational threat; one not concerned with the return on investment or true growth of the game.”

Along with a bump in prize money, Monahan also announced a new three-event international series in the fall for the top players to be held in Europe, Asia and the Middle East.

In 2024, the PGA Tour will return to a calendar year schedule rather than the current model that sees a season split over two years.

There will also be changes to the FedExCup playoff with a greater focus on the best players.

Now, the top 125 in the points standing qualify for the first playoff event but in 2023 that will be cut to 70.

The top 50 will advance to the second playoff event with the top 30 qualifying for final at east Lake in Atlanta.

Monahan also continued to point to the traditions and legacy that go with playing on the PGA Tour.

He also reminded members that they do not have to make apologies when they tee it up at a PGA Tour stop, while LIV golfers must defend their decision to participate in a series that critics say amounts to blatant “sportswashing” by a nation trying to improve its reputation in light of human rights concerns.

“On the PGA Tour our members compete for the opportunity to add their names to history books, and, yes, significant financial benefits, without having to wrestle with any sort of moral ambiguity,” said Monahan.

“We don’t expect to overcome this current challenge by relying on our legacy and track record alone.

“We will ultimately come out of the current challenge stronger because of our loyalty and support of our players and fans, the best in the world, as well as our planned future growth and with our values as our North Star.”