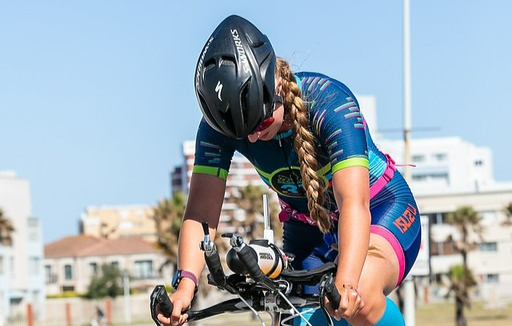 Consistency and discipline are two of the lessons Gqeberha triathlete Jordan Tissink will draw on as she prepares to defend her Xerox Triathlon Summer Series title in December.

The 19-year-old daughter of SA’s most decorated Ironman, Raynard Tissink, aims to put in a strong showing when she lines up in the four-race series starting at Pollok Beach on Sunday.

Tissink won three of the four races in 2020 to be crowned overall champion and will be looking to put in strong performances in defence of her title.

“The 2020 Summer Series was the first event I went into having actually trained. I knew that I was fit going into last year’s race, but I had no idea how I would compare with some of the women who are a lot more experienced than I was,” she said.

Getting into the sport a little more than two years ago, Tissink has achieved noteworthy performances since she first appeared in the Summer Series. She took first place at numerous events, including the Nelson Mandela Bay Triathlon and Duathlon events in May and June and took a winner’s medal in the Isuzu Corporate Triathlon in November to go with the Summer Series gold.

Tissink suffered a setback when she tested positive for Covid-19 about three months ago.

“It took me a while to get back into things and I couldn’t do anything for about three weeks, and then the four weeks which followed that felt as if I was starting from square one again.”

She said she would need to improve on the swim if she wanted to progress in the sport.

“After the DNF [did not finish] at the SAs, I put more focus on my swim and run. This meant building up my weekly mileage and including a few harder sessions,” the former Alexander Road High School pupil said.

Though her parents, Raynard and Natalie, are renowned figures in triathlon racing, Tissink, who started swimming to keep fit, said taking up the sport was entirely her decision.

“My parents never pushed me to take up triathlon. When I left school, I started swimming just to stay fit. I entered my first race for fun and didn’t do very well, which just didn’t sit right as a Tissink. After this, I started training more seriously on my own accord. My parents are also very active, so it’s nice being able to train with them,” she said.

On the week of racing that lies ahead, Tissink said: “I’m obviously not quite where I want to be heading into the race, but I’m still hoping that my times improve from last year.”

Despite the number of runners and cyclists you see on our roads, SA doesn’t rank particularly well
Life
9 months ago
Next Article