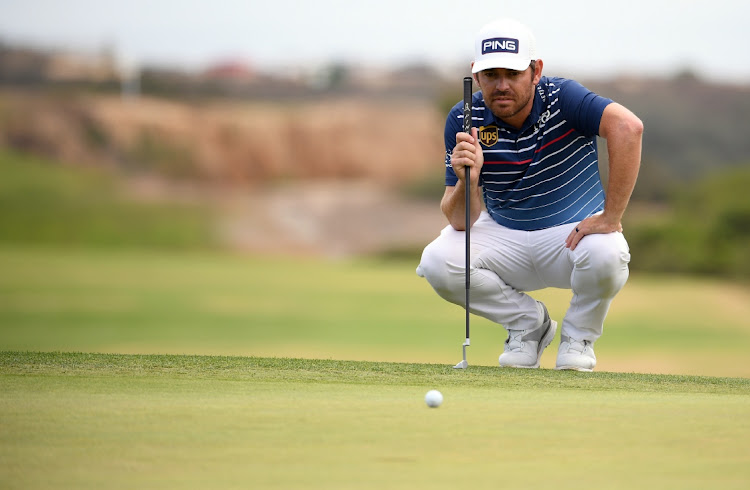 Louis Oosthuizen lines up a putt on the 17th green during the final round of the US Open golf tournament at Torrey Pines Golf Course in San Diego, California, US,on June 20 2021. Picture: USA TODAY SPORTS/MICHAEL MADRID

San Diego — One poor drive ultimately cost Louis Oosthuizen a chance of winning the US Open at Torrey Pines on Sunday but the South African said he would probably take the risky shot on again if given the chance.

A stroke behind Jon Rahm, who was already in the clubhouse, Oosthuizen could have hit a more lofted club off the tee for safety at the par-four 17th but decided it was time to take a calculated risk.

“Slide, slide,” the 38-year-old yelled as the shot headed for trouble, the ball drifting left into a hazard and an unplayable lie.

Oosthuizen, who has now finished runner-up six times at a major, dropped a stroke at the hole and while he got it back with a birdie at the par-five 18th it was not enough.

“I knew it was a crucial hole to take it on and give myself a birdie opportunity,” said Oosthuizen, who shot an even-par 71 after starting the round in a three-way share of the lead.

“I didn’t pull it off, but standing on that tee again, I would probably do the same thing, taking a driver and taking the shot on.

“I went for it, and that’s what you have to do to win majors. Sometimes it goes your way and other times it doesn’t.”

With his languid swing and unflappable temperament, Oosthuizen coped well over a difficult back nine and held his nerve on the greens, making a series of testing par-saving putts until missing a 10-footer at the penultimate hole.

Oosthuizen burst onto the international stage by winning the British Open at St Andrews 11 years ago, but rather than opening the floodgates, that victory set the stage for multiple major near-misses.

It is a month since he finished joint runner-up to Phil Mickelson at the PGA Championship.

“Second again, look, it’s frustrating,” he said. “It’s disappointing. That errant tee shot on 17 just cost me, but all in all, I thought that I fought really well to stay in it and just fell short again.”

Another golfer who was on course for an excellent finish was Bryson DeChambeau when cruising along with a one-shot lead looking well on his way to a successful title defence until an ugly back nine sent him spiralling down the leader board to 26th place.

The collapse was all the more spectacular as DeChambeau had gone 34 holes without dropping a stroke until his nosedive began with a bogey at the par-four 11th. DeChambeau looked in control on the front nine, picking up two birdies including a near hole-in-one at the eighth, and made the turn with a one-shot lead.

The slide began with the bogey at 11, which was followed by another at 12 and then a double bogey at the 13th, where his focus was not helped by a distraction from the gallery.

“There was a streaker that came around, and I had no idea what happened with that,” he said. “I’m just glad an officer  took him down and got him out.”

The worst was yet to come for DeChambeau — a quadruple-bogey eight at the 17th — and he eventually finished the round with a six-over-par 77 for a combined three-over 287, nine back of winner Rahm.

DeChambeau said his slide was just part of the game. “I didn’t get off the rails at all. It’s golf,” he said. “People will say I did this or did that, and it’s just golf.

“I’ve had plenty of times where I hit it way worse than today and I won. Nobody understands, at least if you play professional golf, Major championship golf. A lot of it is luck,” he added. “I caught the bad lies in the back nine today.

“It’s frustrating in the moment when it’s happening, but afterwards for me now, I don’t really care as much. I’ve already won it.”

LALI STANDER: Superb Garrick Higgo one of those who made step up as amateur