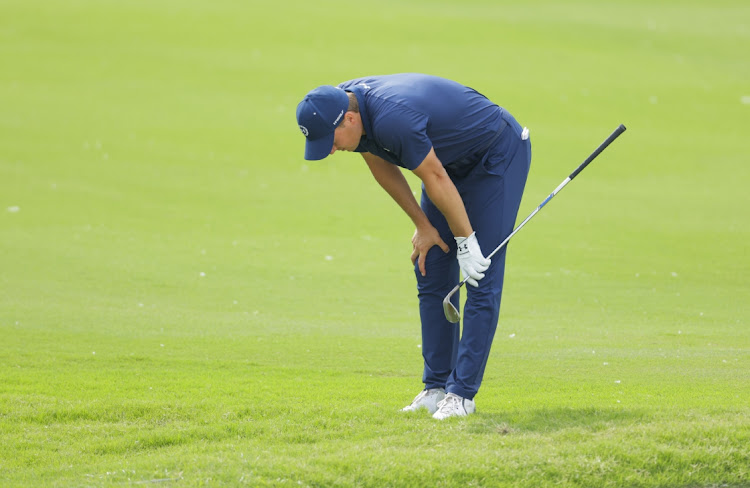 Jordan Spieth reacts on the 15th hole during the final round of the Charles Schwab Challenge golf tournament. Picture: ERICH SCHLEGEL

Fort Worth — Jason Kokrak shot even-par 70 on Sunday to outduel Jordan Spieth and notch a two-stroke victory at the Charles Schwab Challenge in Fort Worth, Texas.

Kokrak finished at 14-under 266 while recording his second career PGA victory. He also won at Shadow Creek last October.

Spieth shot three-over 73 while falling short in his bid for his 13th career victory. The Dallas native had the overwhelming support of the fans who lined up around the greens at Colonial Country Club, but Kokrak spoiled the hometown celebration.

“I don’t know if it motivated me or not but I told myself like the last time — just stay patient, one shot at a time,” the 36-year-old Kokrak said. “That sounds like everybody else, but you know, you can’t get ahead of yourself in this game. This game doesn’t owe you anything, and you know, you take each shot for what it is, whether you make a bogey or a par or a birdie.”

Charley Hoffman shot a sizzling 65 to finish in a four-way tie for third at 10 under. Patton Kizzire (67 on Sunday), Colombia’s Sebastian Munoz (68) and England’s Ian Poulter (68) also finished four shots back.  Troy Merritt shot 65 to match Hoffman for the low round on Sunday.

Merritt was alone in seventh at seven under. Despite carding bogeys on 15 and 16, Kokrak took a one-shot lead to the 18th. But Spieth hit his tee shot into the right rough and his second shot was disastrous, sailing past the hole and the green to the left and dropping into the water hazard.

Spieth eventually got the ball in the cup for a bogey, and Kokrak hit his third shot to less than four feet from the hole. He knocked in the par putt to seal the win.

Spieth won at Colonial in 2016 when he shot 67 or less on all four days. He had rounds of 63-66-66 this time around before the Sunday collapse that included five bogeys and just two birdies.

“I didn’t play well at all, quite simply,” Spieth said. “I could have shot even par today and won the golf tournament but from the very get-go, just a really bad start, and then tried to fight my way through it. But I was just really off with my golf swing. I really lost it this weekend. You just have to be in control around Colonial.

Kokrak had five birdies and five bogeys in the final round. He shot 65-65-66 over the first three days. “Each hole is an individual match against yourself, and Jordan was there the whole day,” Kokrak said.

“He was up a couple, down a couple, and I made my mistakes. He made his mistakes. I tried to stay patient.”

Spain’s Sergio Garcia, who shared the first-round lead with Spieth after a 63, had a rough final round.  He had five bogeys, one double-bogey and one birdie to shoot 76 and finish in a tie for 20th at four-under 276. Defending champions Daniel Berger (68 on Sunday) also finished at four under.

Northern Irishman, coming off his first victory in 18 months, won the event at the South Carolina venue in 2012
Sport
3 weeks ago