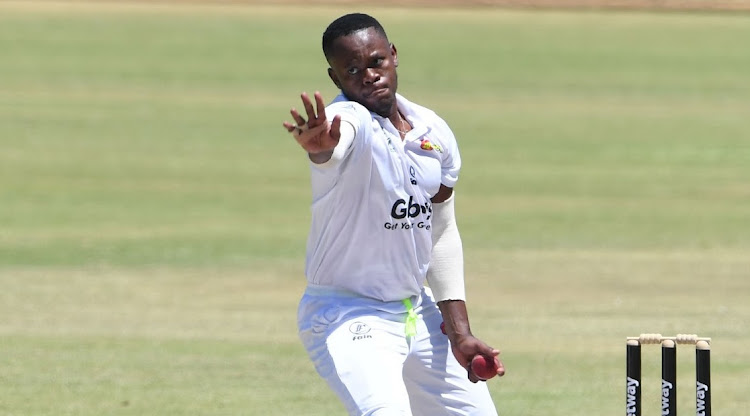 Left-arm spinner Tsepo Ndwandwa has been  one of a number of star performers for the Gbets Warriors so far this season. Picture: LEE WARREN/ GALLO IMAGES

Coming off the back of a commanding 130-run victory over the North West Dragons last week, the former Proteas spinner has challenged his players to produce a performance of the same standard despite some notable absentees in their line-up.

The Eastern Province-based side will be without opening bowlers Marco Jansen and Glenton Stuurman, while batsman Sinethemba Qeshile will also be missing.

All three are on duty with the SA A side in the opening game of the three-match unofficial Test series against India A since Tuesday.

Despite their limited resources, Peterson is confident the players he selects have what it takes to plug the gaps left by their teammates.

“It has been a bit disruptive with the SA A tour happening at the same time as our first-class cricket because we have lost guys who play key roles in our four-day team.

“As I always say, this is an opportunity for someone else to step up and it is nice that we can grow our base, I am confident that whoever comes in can do the job,” he said.

Peterson was pleased to see his team bat so well against North West and said it was a step in the right direction for them as a group.

“It was a good batting performance, particularly in the second innings. We always ask guys to get hundreds when they get in.”

He said they were a bit disappointed after the first innings, but happy with the second innings.

“I am very pleased for Matthew [Breetzke] getting 150 not out, scoring his highest first-class score, captain Rudi Second coming into form, everyone contributed.

“Diego [Rosier] got runs in the first innings alongside Lesiba Ngoepe and Eddie Moore’s partnership with Matty [Breetzke], it was a really solid batting performance and a great blueprint for how we want to do things,” Peterson said.

He also commended the bowling attack, which showed a lot of enterprise in some generally batting-friendly conditions.

“Tsepo Ndwandwa was magnificent with his left-arm spin — he just controlled one end beautifully. Mthiwekhaya Nabe kept on steaming in, Lizo Makosi basically cracked the game open for us in the fourth innings to open the door and run through them.

“Everybody contributed, even Alindile Mhletywa contributed with the huge wicket of Heino Kuhn, and Wihan Lubbe also chipped in with two crucial wickets.

“There wasn’t a player who did not put up their hand when they were required to do a job for the team,” he said.