A ray hope for the beleaguered league as Hashim Amla, JP Duminy and Neil McKenzie step in to help 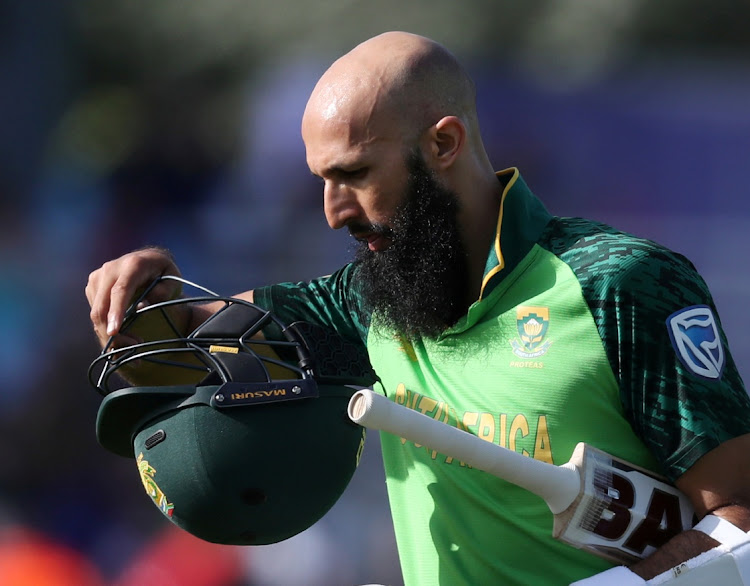 Hashim Amla leaves the pitch at the end of the Cricket World Cup match between Sri Lanka and SA on June 28 2019. Picture: Reuters/Lee Smith

The call to help cricket in SA in a time of desperate need has gone out‚ and it is being answered.

First, Hashim Amla hitched his immense experience to the Cape Town Blitz’s wagon as a batting consultant. Then JP Duminy‚ instead of retiring to his couch in a sulk when a hamstring injury sidelined him‚ stayed on with the Paarl Rocks in a mentoring capacity. On Tuesday the Jozi Stars announced that Neil McKenzie had joined them in a “mentorship and consultancy role”.

Solutions for the long and lengthening list of what ails the game — on the field‚ off it‚ and in boardrooms and banking accounts — are not going to be unearthed in the Mzansi Super League (MSL). The tournament is around for less than six weeks and is‚ at best‚ an escape from cricket’s problems and‚ at worst‚ central to them.

Last year‚ Business Day has learnt‚ the MSL lost millions. It is likely to continue to bleed‚ and is wasting time that could be put to better use preparing SA’s top players to face England in a Test series that starts 10 days after the competition’s final.

But there is heart to be taken from figures of the stature of Amla‚ Duminy and McKenzie have made the choice to give back to the game now; not when cricket’s sky is cloudless. And that‚ even though their services would fetch a pretty penny in the ever-growing coaching market‚ they are not doing it for the money.

“My discussions with Neil and bringing him on board were never financial discussions‚” Jono Leaf-Wright‚ the CEO of the Central Gauteng Lions‚ said on Wednesday of McKenzie’s appointment.

“He was happy to jump on board and assist. I have allocated some money towards Neil’s contribution in my budget to cover some of his out-of-pocket expenses and then a small portion as a thank you for his contribution and assistance towards the side.

“My payment to Neil is really just a token of our appreciation.”

Amla is donating his time for free‚ and while Duminy stands to be paid R400,000 — 40% of his R1m fee‚ in terms of the tournament regulations governing injured players — he did not have to stick around.

“There was no obligation on his part to stay but he indicated that he wanted to stay and act as a mentor‚” Cricket Boland CEO James Fortuin said on Wednesday.

“We were happy to accommodate him. It’s the same with Justin Ontong. He’s got some downtime and he’s happy to help on the fielding side. We’ve also got [Boland coach] Henry Williams who’s assisting on the bowling side. In all of those cases, we’re covering transport and expenses; there’s no remuneration.”

You could take the cynical view that a broke tournament could not afford the additional costs that would normally be incurred by hiring additional coaches. Or that the MSL‚ already struggling to be taken seriously by broadcasters‚ sponsors and spectators‚ might suffer irreparable damage were it not for expert intervention. But that does not explain why Amla‚ Duminy and McKenzie‚ and others‚ have agreed to be involved in ways that will not do much for them professionally.

“The important thing is to keep good coaching involved and trying to keep past senior players in the system‚ so young players have somebody to learn from‚” Dale Steyn‚ still fighting the good fight on the field‚ told reporters in Durban on Sunday.

“If you’re losing those guys you’re creating a huge gap. There’s tons of names for young players to learn from‚ so we need the senior players to stay in.” These names are people such as Graeme Smith‚ who withdrew his interest in becoming Cricket SA’s first appointed director of cricket less than a week after being interviewed for the job.

“It’s a pity Graeme pulled out of something like that‚ because he’s a role model. A lot of the youngsters would have been excited to play under him. It’s a pity‚ but we always push on. We’ll find a way. Maybe‚ just maybe‚ cricket in SA is finding that way.”

With the tournament nearing the halfway stage, it needs crowds, crowd-pleasers and a spot of sun
Sport
1 year ago

MSL? Nah‚ say fans as they tell the taxi to go elsewhere

NEIL MANTHORP: It’s happening in SA cricket, but you must know where not to look

All round the truth about the game is quite scary, and it could do with administrators who have a greater sense of fiduciary duties
Opinion
1 year ago
Next Article