MANSON GWANYANYA: Constitutional Court can slap down the corporate weaponising of the law 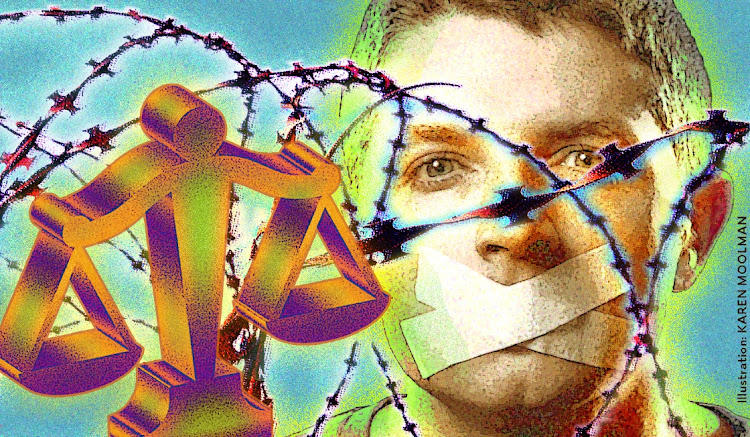 The Constitutional Court had to face one of the most disturbing emerging threats to fundamental freedom last momth. A strategic lawsuit to intimidate and silence human rights defenders who stood up aginst corporate abuse. These lawsuits are known as Slapp suits. Illustration: KAREN MOOLMAN

In February the Constitutional Court came face to face with one of the most disturbing emerging threats to fundamental freedoms and the judicial system: a strategic lawsuit against public participation (Slapp) suit.

Put simply, Slapps are criminal or civil lawsuits brought to intimidate, bankrupt and silence human rights defenders who stand up against corporate abuse. They are frequently used by companies and other powerful entities against activists.

Slapps tend to be groundless or vexatious lawsuits that stifle freedom of expression through judicial harassment — with the added chilling effect of deterring other human rights activists and their communities from speaking out against harmful business activities in the future.

There has been increasing international concern over the rapid growth of Slapps: both the UN working group on business & human rights, and the UN special rapporteur on the situation of human rights defenders have recently called on all states and business actors to take action that prevents the use of the judicial system to silence and intimidate defenders.

Their concern is not unjustified. Between January 2015 and May 2021 the London-based nonprofit Business & Human Rights Resource Centre recorded more than 3,100 attacks against community leaders, farmers, workers, unions, journalists, civil society groups and other rights defenders around the globe who raised the alarm about irresponsible business practices.

Shockingly, more than 40% of these attacks were forms of judicial harassment. In 2021 the centre released the first global analysis of lawsuits that bear the hallmarks of Slapps, which revealed how this tactic is being used in every region of the world to intimidate communities and human rights defenders into silence.

Consistent with global developments, in SA too a significant number of cases bearing the hallmarks of Slapps have been reported over the past two decades. In 2006, in the case of Petro Props vs Barlow & Another, the companies sought to silence efforts by local activists to oppose mining and development projects in their communities through an interdict. The court rejected the application and correctly held that the activists’ conduct was one of “a standard that any vibrant democratic society would be glad to have raised in its midst. Their interest in motivation is selfless, being to contribute to environmental protection for the common good.”

In 2010, in the case of Wraypex vs Barnes, the court condemned the actions of the developer, who sued activists for a ridiculously large amount and noted that “the extraordinarily extravagant amount claimed by the plaintiff, the amounts claimed in the summons from each of the defendants, are prodigious. Nothing emerged in evidence which indicated that the plaintiff could have had a bona fide reasonable expectation that it would succeed in obtaining an award more than an infinitesimal fraction of the amounts claimed.”

Despite these notable cases and numerous warnings from civil society on the ripple effects of Slapps, many countries, including SA, still do not have a clear legislative framework for addressing them. This lack of appropriate legal mechanisms for fighting Slapps was made evident in the high court in the case of Mineral Sands vs Reddell. The resource centre has been tracking the case since 2016 when it started.

The activists fought back against these lawsuits. Back in 2016 they argued in the high court that the action brought by Mineral Sands and its CEO was “an abuse of court process because there was an ulterior purpose to this litigation, which was basically to silence criticism from activists”. In a ground-breaking judgment the high court agreed with their argument and, crucially, noted that corporations should not be allowed to weaponise the legal system against ordinary citizens and activists to intimidate and silence them.

The high court also took the opportunity to highlight the gap in SA’s legislative framework to deal with Slapps — the gap corporations seem to exploit to silence their critics. The court noted ... “[the] lack of a legal framework could be exploited by corporates, and in the process render civil society vulnerable when they embark on pursuing legal challenges and raising legal defences. This contributes to the success of the Slapp, since such legal challenges and defences have a draining effect on the public purse and participation. However, the interests of justice should not be compromised due to a lacuna or the lack of legislative framework.”

Given the damaging effect of Slapps on public interest litigation and activism in general, the Constitutional Court should consider adopting an activist approach and lobby for legislative reform to deal with Slapps. Another mining company, First Quantum Minerals, is involved in similar litigation against the Southern Africa Resource Watch in Gauteng, which the resource centre has also been tracking.

The Constitutional Court should seize this opportunity to request the legislature to reform the law and develop legislation that will ensure justice is not compromised due to this lacuna in the legislative framework. Such a progressive step from the court would ensure businesses using Slapps are properly sanctioned.

As rightly pointed out by the Centre for Applied Legal Studies in its submissions to the Constitutional Court, Slapps go further than a mere abuse of process. At the heart of Slapps is the intended desire to silence activists, particularly through draining them financially and emotionally. Slapps therefore make the crucial work of activists impossible to carry out, alongside paralysing the vindication of the rights of activists and those they fight for.

Slapps are one of the most disturbing emerging threats to public interest environmental litigation, which relies heavily on access to information and public participation in decision-making, both of which are under threat from Slapps. The prospect of Slapps setting roots in the country aggravates these existing barriers, and must therefore be stopped at an early stage. The Constitutional Court has a historic opportunity to set the stage for an authoritative reform of SA’s legal framework.

The constitution obligates the court to specifically develop the law, taking into account the interest of justice. This should include requesting the legislature to develop legislation that will ensure companies cannot use the judicial system to silence and intimidate human rights defenders and activists, and close the gap that is exploited to silence the human rights defenders and activists who are at the core of SA’s democracy.

This would not only put an end to the grave abuse of process by companies, but would set a positive precedent for other African countries, where Slapps persist.

• Gwanyanya is researcher and representative for Southern & Anglophone West Africa at the Business & Human Rights Resource Centre, which has been tracking Slapp suits since 2015.