Apartment block shelled in the capital, but both Russia and Ukraine reported rare progress on talks at the weekend 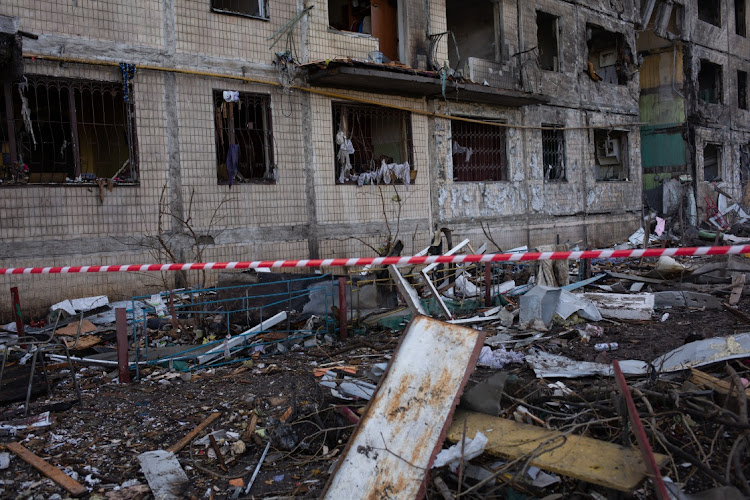 A shelled residential building is shown in the Obolon district of Kyiv, Ukraine, on March 14, 2022. Russian forces continue to attempt to encircle the Ukrainian capital, although they have faced stiff resistance and logistical challenges since launching a large-scale invasion of Ukraine last month. Picture: GETTY IMAGES/ANASTASIA VLASOVA

Lviv — Ukraine said it had begun “hard” talks on a ceasefire, immediate withdrawal of troops and security guarantees with Russia on Monday, despite the fatal shelling of a residential building in Kyiv.

Both sides reported rare progress at the weekend after earlier rounds have primarily focused on ceasefires to get aid to towns and cities under siege by Russian forces and evacuate civilians; those truces have frequently failed.

Firefighters tackled the remains of the blaze at the apartment block in the capital where a stunned young resident described the chaos of the previous night in a city targeted by the Russian advance but so far largely spared bombardment.

Officials said at least one person was killed and three were hospitalised. One body, mostly covered, still lay on the ground.

“We got out from the apartment and saw that the staircase was not there any more, everything was on fire,” Maksim Korovii told Reuters, describing how he and his mother had initially hid, thinking Russian forces were breaking down their door.

“We didn’t know what to do. So we ran out to the balcony. We managed to put on whatever clothes we had at hand and made our way from balcony to balcony and in the end we climbed down by the next building’ entrance. Now we are trying to retrieve some of our things with the help of the firemen.”

Russia denies targeting civilians, describing its actions as a “special operation” to demilitarise and “denazify” Ukraine. Ukraine and Western allies call this a baseless pretext for a war of choice.

Ukraine President Volodymyr Zelensky says almost 13,000 Russian soldiers have been killed since the start of the invasion, and Ukrainians will continue to defend themselves. He spoke on a video message released on Sunday.

Posting online ahead of the talks, Ukrainian negotiator Mykhailo Podolyak wrote: “Negotiations. 4th round. On peace, ceasefire, immediate withdrawal of troops & security guarantees.” He later said discussions had started but were hard, because the political systems of Russia and Ukraine were too different.

Podolyak said he believed Russia “still has a delusion that 19 days of violence against (Ukrainian) peaceful cities is the right strategy.”

Russia has accused Ukraine of using civilians as human shields, an allegation Kyiv has firmly denied.

Moscow said earlier Russia was in control and it saw no reason for UN peacekeepers to be sent to Ukraine, a prospect that had not been widely considered up to now.

While Russian troops have yet to enter the capital, thousands of people have died in other occupied or encircled towns and villages since the invasion on February 24.

The Kyiv city administration said the Antonov aircraft plant there had been shelled. Reuters was not immediately able to verify that report.

Regional governor Oleksiy Kuleba said front-line towns near Kyiv were being evacuated on Monday for the fifth day. “The ceasefire in our region is holding, albeit it is very conditional,” Kuleba said, adding that occasional explosions could be heard in the distance from the place he was stationed.

Podolyak said on Sunday that Russia was beginning to talk “constructively” and he expected some results in a matter of days. Russian delegate Leonid Slutsky was quoted by RIA as saying a draft agreement could be reached soon.

Ukrainian President Volodymyr Zelensky said a clear aim of his negotiators who were speaking daily to the Russians, was to “do everything” to arrange for him to meet Putin.

“We must hold on. We must fight. And we will win,” Zelensky said in a late night video speech.

Moscow had earlier widened its assault, with an attack on a base near the border with Nato member Poland.

Ukraine said 35 people had been killed at the base while Moscow said up to 180 “foreign mercenaries” died and a large number of foreign weapons were destroyed.

Kyiv said the base has hosted military instructors but Nato said it had no personnel in Ukraine. Reuters could not independently verify the casualty reports and it was not clear if any non-Nato foreign personnel had been there.

Global financial markets, which had been riven by fears the conflict could drag in Nato , rallied on hopes for peace talks. Stocks rose while oil prices gave up some of their massive recent gains.

Russian coal and fertiliser king Andrei Melnichenko said the war in Ukraine, a top producer of grains, must be stopped or there would be a global food crisis as fertiliser prices were already too high for many farmers.

Melinchenko is among Russian businessmen sanctioned by the West, which has also frozen state assets and cut off much of the Russian corporate sector from the global economy in an attempt to force Putin to change course.

According to several US officials, Russia has also asked China for military equipment.

Asked about this, Liu Pengyu, spokesperson for China’s embassy in Washington, said, “I’ve never heard of that,” while a foreign ministry spokesperson in Beijing accused the US of “disinformation.”

China found the situation in Ukraine “disconcerting”, Liu Pengyu said, adding, “We support and encourage all efforts that are conducive to a peaceful settlement of the crisis.”

US national security adviser Jake Sullivan, who is set to meet China’s top diplomat Yang Jiechi in Rome on Monday, warned Beijing it would “absolutely” face consequences if it helped Moscow evade sanctions.

Air raid sirens sounded before dawn in many cities and regions of Ukraine, including Kyiv, Lviv, Odesa, Ivano-Frankivsk and Cherkasy.

The invasion has sent more than 2.8-million people fleeing across Ukraine’s borders and trapped hundreds of thousands in besieged cities.

More than 2,500 residents of the southern port of Mariupol have been killed since the start of the invasion, presidential adviser Oleksiy Arestovych said. A pregnant woman pictured being evacuated from a bombed maternity unit there last week had died, according to the foreign ministry. Reuters was not immediately able to verify those reports.

The 360 square-km facility less than 25km from the Polish border, is one Ukraine's biggest and the largest in the western part of the country
World
5 months ago
Next Article