A new broom sweeps clean, and this should be at the top of the agenda of the party that takes office at any of the many beleaguered municipalities 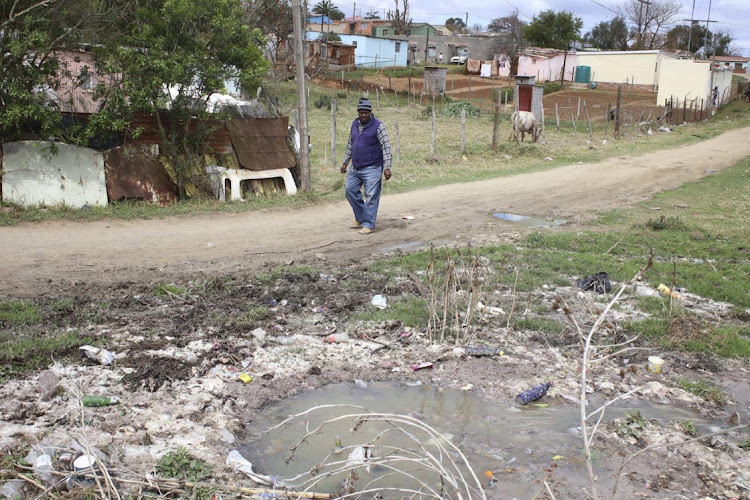 A resident of Makhanda in the Makana municipality in the Eastern Cape walks past overflowing sewage near his house in this 21 September 2021 file photo. Picture: SUPPLIED

In its 2019/2020 report the office of the auditor-general awarded clean audits to only 27 out of 257 municipalities around the country. Meanwhile, we have read about the devastating failures of municipalities such as Lekwa, Maluti-a-Phofung, Makana, Ditsobotla, Steve Tshwete and Govan Mbeki. We are also told that many other municipalities are on the brink of collapse because of mismanagement and corruption.

The results of the recent municipal elections suggest residents are no longer prepared to tolerate such failures. Service delivery protests have escalated and private sector employers are increasingly required to fill the vacuum left by poorly run municipalities. In some instances it has been necessary for them to obtain court orders compelling the municipalities to perform their constitutionally mandated obligations. In other areas employers have simply decided to pack up their operations and move to greener pastures, taking the jobs with them.

A new broom sweeps clean, and this mantra should be at the top of the agenda of the party (or parties) that takes office at any of the many beleaguered municipalities. While our labour laws are unnecessarily restrictive and there are many issues lawmakers must consider, municipalities are not powerless.

The best place to start is to deal with errant and incompetent employees who currently staff the ranks of our municipalities. Disciplinary enquiries should be initiated to deal with them swiftly and fairly. Municipalities should immediately suspend employees who have committed serious misconduct and take the necessary steps to convene enquiries within a short period not exceeding one month. It is difficult to understand why employees who are alleged to have engaged in serious misconduct are often allowed to put their feet up, at home and on full pay, for several months (or even years) at the expense of ratepayers.

The Labour Relations Act (LRA) permits employers to adopt a process that requires nothing more than an opportunity for dialogue and reflection before deciding to dismiss employees who are alleged to have engaged in misconduct. Employers are not expected to conduct full-scale civil or criminal trials before dismissing wayward employees. The Code of Good Practice: Dismissal, which forms part of the LRA, requires employers to prove only that (1) the employee contravened a workplace rule,  (2) the rule was valid or reasonable, (3) the employee was or should have been aware of the rule, (4) the rule has been applied consistently and (5) dismissal is the appropriate sanction.

Overly formal, legalistic hearings, often chaired by expensive lawyers and advocates and taking weeks or months, are unnecessary. There is also no reason legal representation should be permitted in disciplinary enquiries, unless exceptional circumstances exist. The formalisation of these processes inevitably leads to strategic point taking, such as nitpicking over the wording of disciplinary charges or other preliminary issues. The result is excessive and costly delays, funded by ratepayers.

It is possible that some municipalities have been tied into these formalistic processes through collective agreements. Steps should then be taken to roll back those agreements if they operate unfairly against municipalities that wish to rid themselves of recalcitrant and poor performing employees quickly and cheaply.

Instead of replacing errant employees municipalities should consider their operational requirements and, in particular, whether they require the same number of employees to fulfil their obligations towards ratepayers. Demanding higher rates of productivity from employees will do away with the need to employ several people to do work that should be comfortably dealt with by fewer, more productive employees.

With SA’s shrinking tax base there is less money to go around. Municipalities should take the initiative and lead a charge to becoming “lean and mean” entities with low overheads. Municipalities are, of course, not exempt from section 189 of the LRA, which deals with restructuring exercises. It will be interesting to see whether any municipalities are prepared to go down this route to restructure their operations and reduce overheads for the benefit of their residents.

Improving the skill sets available to municipalities is key to getting them out of their slump. Municipalities should recruit appropriately skilled people to tackle their various problems, and in some instances this may require a complete overhaul. Attracting the right talent should not be difficult given the generous salary packages paid to public sector employees and SA’s high level of unemployment.

It goes without saying that none of the suggestions set out above can be implemented without the intervention of competent and firm managers who take their roles as public servants seriously. Those managers should be given support by municipal councils to deal decisively with the challenges facing them, failing which more of the same service delivery issues should be expected.

• The authors are partners at Cowan-Harper-Madikizela Attorneys.

Rewarding kingmakers with the most powerful positions is undemocratic and often leads to failure,  say Western Cape academics
National
8 months ago