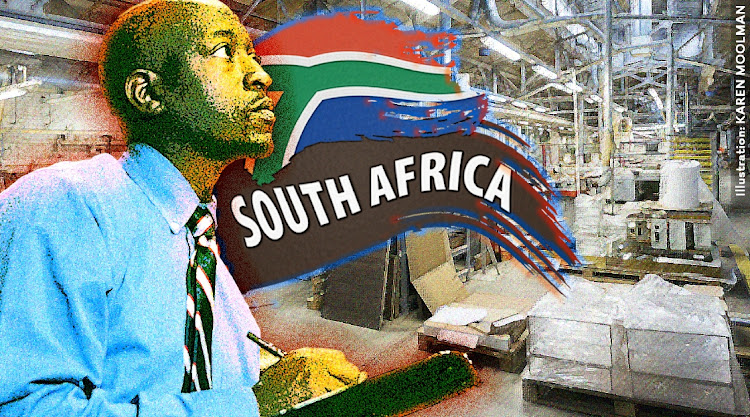 Manufacturing value has been declining since the 1980s and the level of production, is lower than 2005. It is therefore critical to support the SMME sector and reduce our reliance on cheap imports. The Government must invest more in skills development programs and manufacturing technology. This will make South African products more cost effective and improve quality, helping our economy to be more competative globally. Illustration: KAREN MOOLMAN

Much of the public discourse in the build-up to Monday’s municipal elections was dominated by political sloganeering and hollow media debates centred on vague policy. Interest in postelection promises is seemingly focused on addressing two of the largest elephants in the room that are battering the SA economy — chronic unemployment and the debilitating energy crisis.

The two are indelibly linked — and business, labour and the government agree that resuscitating the economy has to be initiated with a sustainable, local focus. Unemployment and hunger breed desperation and a disaffected population — a potential result of which is civil unrest. Of the recent looting and violence, Bonang Mohale, chair of JSE-listed Bidvest and former CEO of Business Leadership SA, said, “We have 10-million young people sitting without work, not in any kind of training or life preparation. The devil finds work for idle hands.”

It is not incidental that Lesco Manufacturing, the company I head and a third-generation local manufacturer of electrical products, operates at the heart of these chasms. What we have seen first-hand, apart from the economic multiplier effects resulting from the upskilling of a historically marginalised workforce, is the astounding innovation that emerges from this somewhat neglected demographic. And this is where I believe the discourse around localisation is one-dimensional.

Economist Mike Schussler recently wrote that manufacturing production levels between May and July 2021 were lower than as far back as 2005. He added that, alarmingly, of 59 countries with a decade-long manufacturing history the median increase over the past decade was 15.5%, whereas SA’s share of world manufacturing value added has been in decline since the 1980s.

On the face of it, it appears dire. The department of trade, industry & competition’s policy statement on localisation talks to a series of important themes that underpin the future trajectory of local manufacturing. For one, it acknowledges at the outset that growth in employment will be stimulated by higher-demand products and services, which may emerge through a combination of expanded domestic demand and increased levels of exports.

The department argues that to create jobs on scale both of these drivers of new private sector job growth must be pursued. Localisation intends to cultivate local industrial capacity for the domestic market and for export markets. The paper adds that this is not a turn away from engaging in global markets, but rather about “changing the terms of the engagement to one where we are no longer mainly an exporter of raw materials” — a necessary evolution to boost GDP growth and enhance our global competitiveness.

There is alignment in these statements to what finance minister Enoch Godongwana recently said regarding the government’s need to intervene to further its implementation of strategic localisation. With the manufacturing sector’s capital base having shrunk since 2008 from R677.7bn to the current R545.9bn, in real terms, it has become increasingly clear that as business supported by the government we need to reduce the proportion of imported intermediary and finished goods and expand the capacity of local suppliers.

Local institutional bodies and business chambers, including Business Unity SA and Business Leadership SA and the Black Business Council, have interrogated the localisation policy, and ascertained an independent view of the domestic and macro repercussions of such a policy initiative. The resulting report from global research firm Intellidex queried as part of its scope to determine whether maximum local content was indeed the best policy, reads: “The goal of business in an inclusive economy should be to maximise ‘development’ in the broadest sense which means, in the SA context in particular, to maximise job growth. This implies low-cost, high-quality inputs and working at parts of the value chain that are particularly suited to the marginal member of the labour force to reduce unemployment. This may well also be a point in the value chain that coincided with maximal local content, but not by definition.”

The report concluded that localisation should not be a fundamental policy goal but rather be framed as a “second-order policy aim only where there is analysis that imported cheaper, quality goods do not create a more positive jobs outcome considering all upstream and downstream effects”.

It is critical not to overlook the SMME sector in building capacity required to implement such a policy at scale. In May, when trade, industry & competition minister Ebrahim Patel presented his departmental budget to parliament, he told the world that the localisation strategy would result in up to R200bn of additional production over five years. Through stricter regulations and practices of designating more local products for production, Patel’s department would take active steps, with its counterparts at the SA Revenue Service, to ensure those products that are designated for 100% local content are not allowed to enter SA.

Is this kind of protectionism necessary? Much of the discussion around the bolstering of our local manufacturing sector is centred on the following symbiotic themes:

Fuelling this idea is the sentiment that as input costs in China rise, and as global manufacturers seek to diversify supply chains, alternative emerging market manufacturers would stand to benefit. Some commentators don’t believe we have the skills in this country to compete. For instance, Dr Azar Jammine has criticised the localisation plan, suggesting the country does not have the required skills base to make it successful, and that with the inherent lack of productivity this demonstrates a misguided attempt to address unemployment.

As someone who walks a factory floor daily, I am confident that the right attitude, hunger to develop skills and desire for emancipation run deep. I also have little doubt that there are many other local businesses that are well placed to compete from a cost perspective, without compromising on maintaining the highest safety and ethical standards.

At the very least, the government recognises the urgency to address the fundamental socioeconomic challenges. Whether the recovery in the immediate term will come from a localisation policy that will promote growth across the value chain, only time will tell.

• Shapiro is CEO of Lesco Manufacturing.

GARY RYNHART: Why resilience is the new sustainability

The ability of a business to predict the next crisis is impossible, but the ability to prepare for it is not
Opinion
8 months ago

Mudiwa Gavaza is joined by Lelanie Bason, MD of the academy and venture departments at MyGrowthFund Venture Partners
Companies
8 months ago