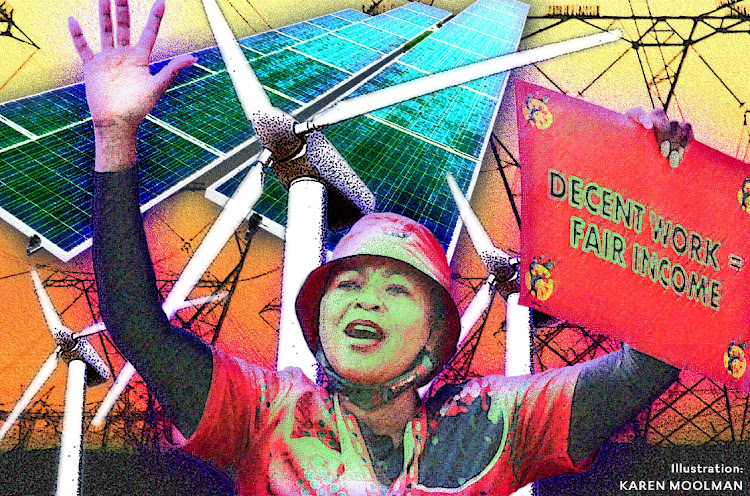 The SA renewable masterplan (Sarem), innitiated by the Trade & Industry department could contribute to work creation in the renewable energy sector. However, Cosatu are concerned that about 120,000 jobs in the Coal sector and energy value chain may be at risk. Careful planning and support for social protections as well as regional economic development in targeted areas will be required to ensure that the transition to renewable power does not negatively impact the working class. Illustration: KAREN MOOLMAN

About 120,000 direct jobs in the coal energy value chain, and many more connected livelihoods, are at risk in the transition to a low carbon economy in SA. Careful planning and support for social protections and plans for regional economic development in targeted areas will be required to ensure the benefits of the transition are captured by working class communities.

The SA renewable energy masterplan (Sarem) currently being developed after being initiated by the department of trade, industry & competition, is an industrial strategy for the sector that could contribute to decent work creation. However, a new Institute for Economic Justice policy brief, prepared for Cosatu and based on the Sarem background study, finds that the strategy’s potential to contribute meaningfully to job creation is undermined by its reliance on electricity sector liberalisation.

The majority of decent work opportunities from renewable energy are recognised internationally as being derived from the localisation of the associated value chains. So far, SA’s renewable energy industry — dominated by the expansion of private wind and solar generation projects implemented under the Renewable Energy Independent Power Producer Programme (REI4P) — has created only 57,236 direct job years (64,950 full-time equivalent jobs). More than 80% of employment derives from construction, temporary and casual work. This trend has raised transition concerns in the labour movement, which has advocated for guaranteed decent work opportunities as the economy moves away from fossil fuels.

Global trade dynamics, the cost of capital and the capability of economies to absorb technologies and achieve scale have been key factors affecting the potential localisation benefits to be achieved by greater domestic market certainty for wind and solar technologies. This is compounded by the relatively small share of renewables in SA’s energy mix: by 2019, the solar and wind technology market leaders in installed capacity included China (535GW), USA (163GW), with Australia in 10th place (23GW), whereas SA’s stood at 4.7MW.

China’s dramatic rise to monopoly control of global solar photovoltaic (PV) value chains was achieved through targeted industrial policy, an ecosystem for technology transfer, and cheap debt tied to an export focus for manufactured goods. In Australia, high solar PV penetration relied on legislation and financial incentives assuring market certainty, but developers remain dependent on imported technology. This has resulted in China yielding more than eight times as many jobs per GW installed from its solar PV industry than Australia, despite the latter producing a higher proportion of its power from solar PV plants.

Before 2006, the US had decades of comparative advantage in solar PV over China, with public subsidies focused on technology companies across a wide range of cutting edge technologies. However, US manufacturers were unable to mobilise private domestic capital as the economy failed to recover from the 2008 global financial crisis. China capitalised on this by offering cheap debt to US-based manufacturers at state bond rates in exchange for local ownership, and this led to their relocation.

China’s incentives strategically focused on a singular mature technology — wafer-based silicon solar cells — which, while lower in efficiency than thin film panels, is more labour-intensive with enhanced employment benefits. The provision of cheap debt and the nature of the selected production processes of strategic technologies have been decisive in allowing Chinese manufacturers to rapidly achieve scale and undercut manufacturing efforts closer to the major demand centres abroad.

The EU and US have significant local manufacturing capacity for wind turbines. Despite having a combined domestic wind capacity half that of China’s, they each achieve four to five times the employment benefits per gigawatt of installed wind capacity. This is attributed to the large global market share of EU-based original equipment manufacturers (OEMs), in conjunction with comparatively higher levels of localisation than their Chinese competitors.

Wind OEMs are protective of the intellectual property of key components and exercise control over machines installed in the field through maintenance contracts. Wind blades, turbine construction and component assembly are low-hanging fruit for value chain localisation. China responded to these trends by implementing import tariffs on wind turbine components and requiring local content requirements as high as 70% to support local industry.

These trends are of concern for solar module manufacturers in SA (at present ArtSolar and Seraphim), which have had limited success in meeting their available production capacity. The overwhelming majority of solar modules used in REI4P projects remain imported. This trend will persist without market structuring interventions.

Our policy brief recommends that Sarem propose the following support measures for deep localisation of wind and solar value chains:

• Kamanzi is a researcher in energy policy at the Institute for Economic Justice.

ANDREAS KLUTH: How green is green when it comes to classifying energy?

ANDREAS KLUTH: How green is green when it comes to classifying energy?