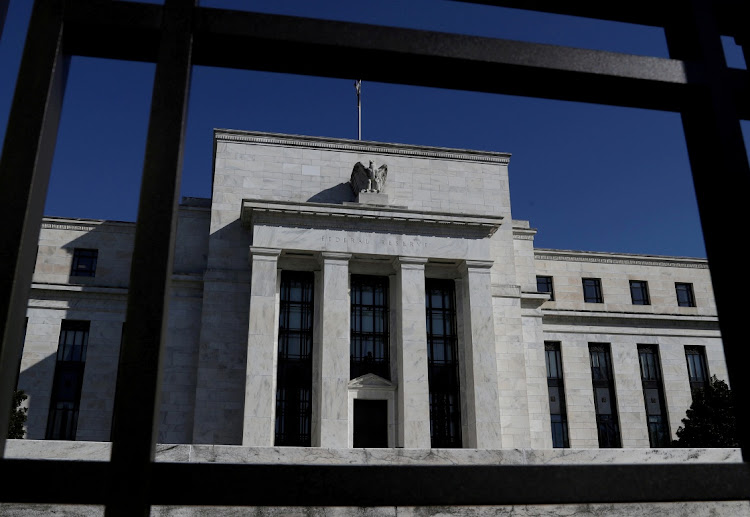 The Federal Reserve Board building is pictured in Washington, US. File photo: REUTERS/LEAH MILLIS

When global liquidity conditions are easy, emerging market economies in general, and the SA economy in particular, benefit from the ready availability of foreign capital. These conditions allow even profligate governments to finance themselves, as foreigners are only too eager to lend. They also help keep domestic interest rates low and the currency well-bid.

By contrast, when the easy global liquidity music stops playing, emerging market economies are vulnerable to capital flow reversals. This is particularly the case if when the sun was still shining they failed to build up buffers for a rainy day. In those conditions their currencies weaken and serious questions get asked about their ability to repay their debt.

All the clues now in the US, still the world’s largest economy, suggest it is only a matter of time before the Federal Reserve (Fed) will start tapering its aggressive bond buying programme, which has kept global liquidity conditions so ample. SA policy-makers would be remiss not to take note of those clues and prepare the economy for another taper tantrum. This is all the more the case considering that the forthcoming taper tantrum is likely to be more severe than the 2013 Bernanke taper tantrum that shook global financial markets.

One reason to expect a more severe Fed tapering programme this time around than in 2013 is the very much larger scale of the Fed’s bond buying in the wake of 2020’s Covid-19 crisis than what followed the 2008 Lehman bankruptcy. Indeed, whereas it took Ben Bernanke’s Fed six years to increase the size of its balance sheet by $4-trillion, it took Jerome Powell’s Fed only about six months to do the same. Even today the Fed is continuing to buy $120bn a month of US Treasury bonds and mortgage-backed securities.

Another reason to expect that the forthcoming tapering will be more severe than its predecessor is that the US is now engaged in by far its largest peacetime budget stimulus on record. In response to the Covid-19 pandemic the US has increased public spending by a cumulative 25% of GDP in 2020 and 2021. That is all too likely to require the Fed to slam the brakes on hard early in 2022 to prevent the US economy from overheating and inflationary expectations from becoming unanchored.

Among the clues that we cannot be too far from another round of Fed tapering is that US inflation has begun to raise its ugly head. Indeed, over the last three months inflation has been running at an annualised 7.5%. This has induced the Fed to raise its inflation forecast for 2021 to 3.5%, which would be almost double its 2% inflation target.

The Fed clings to the hope that the inflation we are seeing today will prove to be the transitory effect of today’s supply bottlenecks. Once these are resolved the Fed believes inflation will revert to its targeted path.

In taking such a benign view on inflation the Fed chooses to turn a blind eye to the fact that today’s budget stimulus by far exceeds the degree to which current US output falls short of full employment. That stimulus is also about four times the size of the 2009 Obama stimulus, which has induced former US treasury secretary Larry Summers to describe these budget policies as the most irresponsible in the last 40 years.

The Fed also chooses to ignore the fact that a very large amount of pent-up demand had built up during the Covid-19 lockdown and must be expected to be released now that most Americans are vaccinated. That pent-up demand, coupled with the excessive Biden budget stimulus, is bound to lead to an overheated US economy by year end, which will only add to inflationary pressures.

The Fed’s decision not to tighten monetary policy until it sees clearer signs of inflation offers SA economic policy-makers perhaps one last chance to get the economy into better shape to weather the all-but-inevitable forthcoming taper tantrum. One has to hope they have the wisdom and courage to grasp that last chance before it is too late.