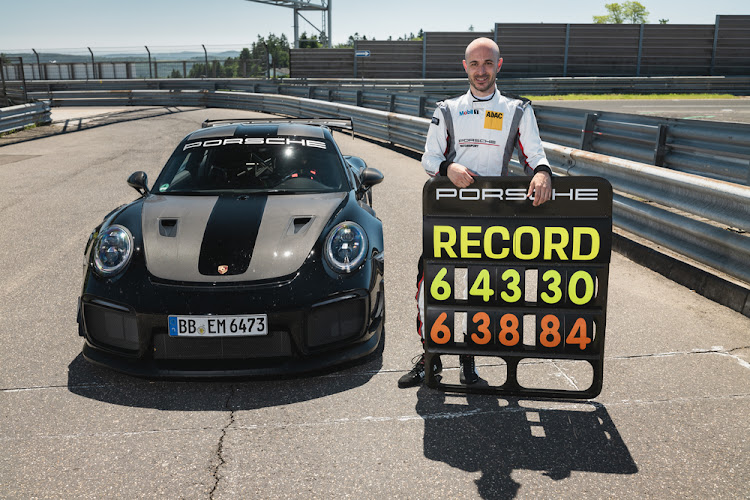 Porsche test driver Lars Kern, who has been notching up record runs lately has done it again with a 911 GT2 RS fitted with the Manthey Performance Kit.

His 6 minutes 43.3 seconds on June 14 is a lap record for road-legal production cars on the 20.8km Nurburgring Nordschleife track.

The Manthey Performance kit doesn’t increase the power. It consists of chassis, aerodynamic and brake component tweaks specially developed for the rear-wheel drive GT2 RS that produces 515kW and 750Nm.

Though no longer in production, owners of existing GT2 RS models can retrofit the kit that’s available through Porsche Tequipment catalogues. The kit was co-developed by Porsche’s engineers in Weissach and Manthey-Racing’s track specialists. Porsche owns 51% of Manthey-Racing, which specialises in the preparation of circuit-specific and street-legal cars, and has been running GT works competition for Porsche Motorsport since 2013.

“The 911 GT2 RS sticks to the track like glue with the Manthey Performance Kit,” Kern said. “You feel as if you’re in a racing car, especially on faster corners. It is truly breathtaking how the car puts its 515kW down, and how incredibly well it brakes while always remaining easy to control.”

The Manthey performance kit ensured an average speed of 185.87km/h, while the standard car musters 184.11km/h.

“Our GT customers often use their cars on circuit, such as on track days,” said Frank-Steffen Walliser, vice-president of Model Lines 911/718. “The engineers at Manthey and Porsche have together developed a perfectly tuned package that allows the 911 GT2 RS to deliver even higher performance.”

For now the circuit-focused Porsche Tequipment components are available only at Porsche Centres in Europe. SA arrival and pricing have yet to be announced.