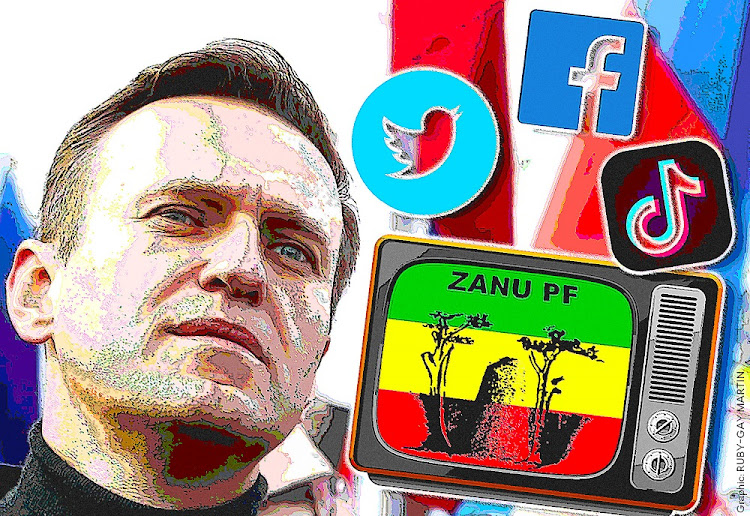 For Zimbabwe and Russia, silencing the opposition and trying to re-establish a one-party state under the shaky guise of democracy is a priority. And for both countries, the Covid-19 pandemic could not have come at a better time — it has enabled both de facto dictatorships to crush their countries’ popular opposition parties. In Russia this is Alexei Navalny’s Russia of the Future, while in Zimbabwe it is the Movement for Democratic Change Alliance (MDCA), headed by Nelson Chamisa.

According to recent reports, Navalny is close to death. Last week he was transferred to hospital from prison, where he is serving a two-and-a-half-year sentence after being arrested in January when he voluntarily returned from Germany. He had been treated there for poisoning by a highly toxic nerve agent, allegedly administered by Russian state agents. Navalny recently embarked on a hunger strike in prison in protest against being denied medical treatment, saying he was left with no choice because the back pain he has experienced due to the poisoning had spread to his legs. He began winding down his hunger strike at the weekend.

Navalny is one of few Russian opposition leaders who has managed to get under Putin’s skin, having mocked him in public and made establishing a free and fair society and fighting corruption his campaign mission. He has a large following in Russia, but as his health deteriorates and he languishes in one of the country’s most notorious jails, it remains to be seen whether he can keep up the momentum of regular mass public protests.

Russian relations with the EU and US have been strained after Navalny’s poisoning and imprisonment, having already reached a new low after the annexation of Crimea in 2014, repeated hacking attacks on the West and Russian meddling in the 2016 US presidential election.

The Kremlin has rejected demands from the US and EU that Navalny be freed and the brutal crackdown on his supporters stopped. Instead, Moscow has accused the European Court of Human Rights of meddling in its domestic affairs after it ruled that Navalny should be released. Yet despite extensive use of force to suppress dissent, demonstrations continue to take place inside the country.

Putin is taking a degree of political risk by keeping Navalny in prison and denying him medical treatment. Allowing him to die in prison would impact negatively on the Russian government as Navalny would almost certainly be martyred by his followers.

Russian elections are not free and fair as the opposition is not allowed access to television. Putin controls the Russian airwaves, which he uses extensively to broadcast propaganda. Navalny’s supporters have resorted to social media to organise and campaign, and this has proved a major headache for the Kremlin. Russian intelligence monitors social media, and in recent months the Kremlin has castigated Telegram, Twitter, Facebook, TikTok and Google for failing to delete posts that urged people to take part in banned demonstrations.

Over the years the Kremlin has made efforts to control every sphere of online expression. It has also used the Covid-19 pandemic restrictions to silence the opposition. Prominent opposition figures have been placed under house arrest for violating coronavirus safety rules, with 10 opposition leaders and dissidents specifically targeted. Navalny’s brother, Oleg, a lawyer and spokesperson for Russia of the Future, is among those charged.

On April 5, Putin signed into law a constitutional amendment that could keep him in power until 2036. This was rubber-stamped by the Kremlin-controlled legislature. At 68, Putin is already the Kremlin’s longest-serving president since Josef Stalin. The amendment to the constitution also placed Russian law over international norms and outlawed same-sex marriage.

Closer to home in Zimbabwe, a country that was once regarded by Kwame Nkrumah as “the jewel of Africa”, the tactics used by the Kremlin have been copied and pasted by the Emmerson Mnangagwa regime. Zanu-PF also controls and monopolises the television airwaves, refusing to allow the opposition any positive exposure. The opposition has similarly resorted to using social media to campaign, with the result that the Zanu-PF state machinery has cracked down mercilessly.

Amnesty International has accused the Mnangagwa government of unleashing state agents to assault opposition members, journalists and defenders of human rights, often under the guise of upholding Covid-19 regulations. The rights organisation has accused the Zimbabwean government of killing at least 10 people, including MDCA councillor Lavender Chiwaya. Zimbabwean political insiders say the Mnangagwa regime has also used the pandemic as an excuse to prevent by-elections that could see Zanu-PF lose seats in parliament.

A fine of Z$400,000 (R16,000) was recently imposed on MDCA MPs for “disrespecting” Mnangagwa by not standing up for him when he entered parliament, something that has no precedent.

Zanu-PF has now set its eyes on the 2023 elections, which it is intent on using to consolidate power. To achieve this, it has begun dismembering the opposition, political and civil, strategically promoting unelected appointees of minority proxy parties and recalling genuinely elected MPs of the opposition, notably and most recently Tendai Biti.

The changes to the constitution pushed through parliament in Harare last week illustrate that Zimbabwe is already well on its way to becoming a one-party state. Only 22 MPs from the MDCA opposed the bill — the rest appear to have been bought off by Zanu-PF’s system of patronage, or possibly by a promise that they could be excused from having to pay the “disrespect” fine.

Zanu-PF political commissar and defence & war veterans affairs deputy minister Victor Matemadanda recently said that war veterans did not go to war to liberate the country only to then surrender it to the opposition, making it clear that the party intends to hang on to power at all costs.

Zanu-PF director of information & publicity Tafadzwa Mugwadi also recently stated on social media that the remaining international sanctions will ensure Zimbabwe becomes a one-party state, since it has “mastered the art of consolidating and retaining power”. In fact, those sanctions that remain in place are targeted sanctions against corrupt Zimbabwean individuals and companies, not the country as a whole.

Just like the Kremlin, the Zimbabwean government is applying Covid-19 rules selectively, using them to postpone by-elections and prohibit the MDCA from holding gatherings, while Zanu-PF is allowed to continue to hold regular rallies without sanction.

While SA has no sway over Russia’s affairs, it is time it and the Southern African Development Community took a stand against Zimbabwe’s continued attempts to dismantle democracy in the country, even if only to prevent further humanitarian crises from impacting on the region.

• Dube is an academic with a master’s degree in international relations and politics. Hudleston is a journalist and author of ‘Face of Courage: A Biography of Morgan Tsvangirai’.

MTHULI NCUBE: Zimbabwe is open for business, but it’s more than that...

The nation has risen 21 places in the World Bank’s global ease of doing business rankings over the past three years, and 31 places over the past five
Opinion
9 months ago

Position near the bottom of the pile, at 110 out of 115 countries, is especially due to rising electricity prices
National
9 months ago