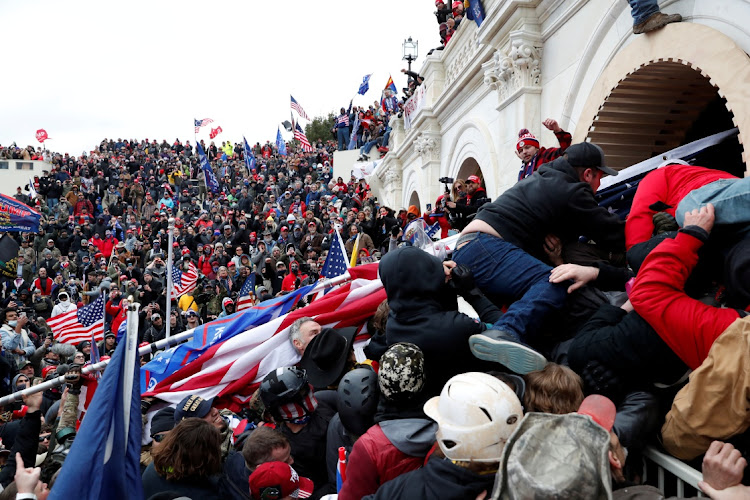 Pro-Trump protesters storm into the US Capitol during clashes with police in Washington, the US, January 6 2021. Picture: REUTERS/SHANNON STAPLETON

America could hardly have been kinder with propaganda gifts to autocrats over the past few months.

First, there was the mishandling of a coronavirus pandemic spiralling out of control; then, chaotic elections that the incumbent refused to concede. Now, the televised storming of Capitol Hill by marauding protesters, virtually unchallenged by police.

This is invaluable material for Russia’s Vladimir Putin, China’s Xi Jinping and any other leader eager to portray transitions of power as anarchic and damaging, cementing their own importance as custodians of stability.

It helps justify their clampdowns on opposing voices and enfeebles the US in standing up as a meaningful proponent of democracy. The potential short-term damage is no doubt overdone by the effects of dramatic footage.

President-elect Joe Biden will take over in two weeks and the pillars of the US political system are still standing. But the pernicious longer-term affect of events in recent months — culminating with the first large-scale breach of the Capitol since 1814, incited by an elected president — are far more worrying, especially for people fighting for freedom and representation elsewhere. This is not turbulence in the Kyrgyz capital Bishkek after allegations of vote-rigging in October, but a transition of power marred by violence in Washington, DC.

State media in China, Russia and beyond, having covered November’s election turmoil and Donald Trump’s belligerent speeches closely, are now beaming images of flag-carrying rioters against the background of the Capitol and, inside, of legislators taking cover.

As with a Rorschach inkblot test, everyone is reading into the mayhem what they want. The chief reporter of China’s state-backed tabloid Global Times made a comparison to pro-democracy demonstrators’ incursion into Hong Kong’s Legislative Council in 2019. The paper carried a roundup of online schadenfreude, contrasting images of China’s regimented Covid-19 fight with clashes in Washington.

Polish television likened the demonstrators to the country’s own opposition. Maria Zakharova, the usually vocal spokesperson for Russia’s foreign affairs ministry, merely shared a post from former CNN Moscow bureau chief and Russia scholar Jill Dougherty: “The US will never again be able to tell the world that we are a paragon of democracy.”

It’s noteworthy that, for now at least, commentary is sparser than back in November. The images from the ground are enough to do the work of many thousands of words for the world’s propagandists.

Strongman leaders, meanwhile, are mirroring back language normally used by the state department on distant electoral disarray. Turkey said it was following internal developments with “concern” and called on “all parties in the US to maintain restraint and prudence”.

Diosdado Cabello, a senior figure in Venezuelan leader Nicolas Maduro’s political circle, tweeted, “I’ll be brief: The USA, what a mess. We will win!” The government condemned “political polarisation” and a “spiral of violence that only reflects the profound crisis that the US political and social system is going through”.

There are three worrying consequences in all this. First, it makes peaceful transitions of power more difficult by bolstering the notion that strongmen love to support — that alternating leaders equals pandemonium.

The promotion of stability has already helped Putin to justify constitutional changes allowing him to stand again in 2024, when his current term expires. He argues that Russia has little time for the jostling among potential successors.

China removed term limits on its presidency in 2018. In both places, an increasingly popular response to silence criticism of anything from governance to the spread of Covid-19 has become: It’s worse over there.

Second, the example of US disarray allows authoritarian leaders, and those teetering on the brink of becoming one, to tighten control over opposition voices. Washington, they will argue, is proof of what happens when extreme, fringe elements run wild, society is allowed to fracture and social media is unbridled.

The third, and perhaps most painful outcome, is that it becomes far harder for the US, having failed the most basic test, to act as the beacon of democracy that it has been for decades.

In extremis, this could prove to be, as so many have rushed to say, the US equivalent of the 1923 Munich Putsch. But it’s vital to point out that what happens next is not predetermined.

Americans are now waking up to the cold reality of what so many of us who have seen less stable or long-lived systems already know: Democracy can erode fast, if you allow it to.

In fact, what happens next matters almost more than what we’ve just witnessed. The US succeeded in counting its votes in the midst of bedlam back in November. If the country can now act to mend the torn social fabric and repair its politics, it will provide a better lesson in democracy than years of preaching ever could.

Despite still ‘disagreeing’ with the outcome of the election, Trump made the statement as staff resign and Republican objections fizzle out
World
8 months ago

Earlier in the day, Trump held a rally near the White House, where he repeated his false claims that his loss to Joe Biden was due to vote fraud
World
8 months ago

While some European lawmakers issued statements backing US institutions and its democracy to overcome the turmoil, others were more condemning of the ...
World
8 months ago