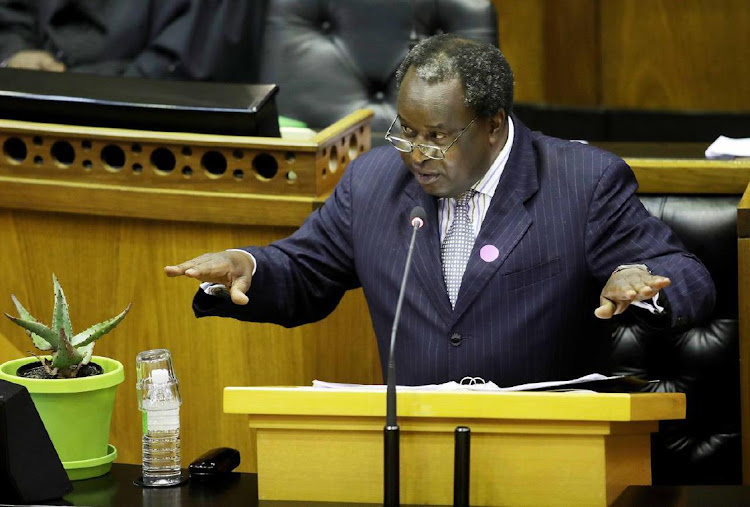 Who is in effective control of SA? Who is attending to the lack of service delivery that SA desperately needs? Who is charting a road to uplift the country and its people? Finance minister Tito Mboweni presents the economic road map for SA on Wednesday. He is in a jam, and miracles are beyond his purview.

On October 21 2015 then finance minister Nhlanhla Nene said in his medium-term budget policy statement: “I should refrain from trespassing on territories that are supervised by cabinet colleagues. My point is that the proposals in our medium-term budget projections are only the more quantifiable instruments of our transformation. There are deeper and more profound currents. It is in the quality of our services, and the integrity of our engagements, that we have the most powerful levers of social change.”

Mboweni can announce policies and plans to fill the bucket, but he cannot fix the big hole in the bucket. There are more hands steering the economic direction of SA than those of Mboweni, and these hands have their own agendas.

On October 28 2020 Mboweni announced in his medium-term budget policy statement that the economy was expected to contract by 7.8% in 2020 (real GDP was expected to grow at 0.9%), economic growth was expected to average 2.1 % over the three‐year forecast period, interest payments were absorbing limited public resource, there had been a sharp drop in public infrastructure investment, and the government balance sheet was deteriorating, including state‐owned companies and municipalities struggling to pay salaries and other operational costs. The forecast was for tax increases of R5bn in 2021/22, R10bn in 2022/23, R10bn in 2023/24 and R15bn in 2024/25.

SA’s debt is just under R4-trillion, which is projected to reach R5.5-trillion in 2025/26. The tax revenue shortfall is now R312bn, much worse than was initially projected. Where will the tax increases come from? Tax revenue as a percentage of GDP has grown from 22% in 1994/95 to 26% in 2019/20. Personal income tax and VAT account for 65% of our tax revenue. Company income tax revenue has steadily dropped and is at about 16%. Less than 39% of SA’s population is registered for tax. Less than 5% of individuals pay 40% of personal income tax.

The 2019/20 budget advised that SA required stronger investment by, and partnerships with, the private sector. Yet failure to offer opportunities to draw in private sector skills and investment continues. Policy uncertainty in many areas continues, and a conducive business environment critical to business confidence remains elusive. The speed at which our economy can grow is determined by the cost of doing business, the regulatory environment, support for innovation and competition, and the quality and cost of infrastructure.

The National Treasury warned in the 2019/20 budget of mounting distress at state-owned companies eroding the fiscal position further, rising borrowing costs, declining confidence and investment, coupled with worsening global growth. Sadly, this has come to pass.

Which brings us to the two large elephants in the room: Eskom and the big hole in the bucket. The size of Eskom’s balance sheet and its dominance in the energy sector affects the cost of borrowing for government, which affects the cost of borrowing for the entire economy. There can be no sustainable economic recovery without reliable power. Tax morality will inevitably decline in an environment of rising taxes, declining competence at the SA Revenue Service and where taxpayers are well aware of a huge hole in the bucket. It’s not complicated.

Can we tax ourselves into economic prosperity? SA’s tax base is paper thin and it should be abundantly clear that we cannot tax our way out of the looming debt trap. It’s all about the economy and how we can increase the size of the cake. Rose-tinted glasses and optimistic “narrative economics” likewise will not solve our economic woes. Never-ending ideological plans and poetic budget speeches will just not cut the mustard.

There is no effective implementation or any co-ordinated leadership. Leadership appears to be split in several different centres, all attending to their own agendas and not focusing on charting a co-ordinated road to uplift the country and its people.

The question remains, who is in effective control of SA’s destiny and economy? The 2019/20 budget speech recorded that “the National Development Plan calls for a capable and efficient state that creates the right environment for the private sector to flourish. Taxpayers deserve to feel that their money is going to a government that is efficient and capable.” It further declared that “We are moving forward!”.

• Lai King, a former head of taxation and Africa-Asia practices at Hogan Lovells SA, is MD of 1 Road Consulting.