Africa has upped its game in response to changing market conditions

While the Covid-19 pandemic has been disruptive worldwide, it has provided a unique opportunity to take a critical look at how African financial markets have developed since the 2008 global financial crisis.

As shown by the newly released Absa African Financial Markets Index (AFMI), the continent made significant progress in terms of its ability to respond to changing market conditions.

If I was to identify one theme that stood out in 2020, it would be “innovation”. While the word does tend to get overused, we can celebrate innovation and the products that are coming to the market.

Now in its fourth year of publication, the index is independently produced by the Official Monetary and Financial Institutions Forum. It records the openness and accessibility of financial markets across the continent and serves as a guide for governments and policymakers to put the necessary infrastructure in place to deepen and improve the markets to enable African countries to attract their fair share of global investments, at risk-reduced levels.

The Seychelles has been one of the standout performers in the AFMI in the past 12 months and its issuing of a $15m Blue Bond to stimulate its local economy has been touted as one of the understated financial success stories over the period — but we need more of this kind of thinking.

The Coronabonds issued by the African Development Bank are proof that we can develop African solutions for African markets. The $3bn funding from the bond is being used to specifically respond to the health and economic impacts of the Covid-19 pandemic across the continent. 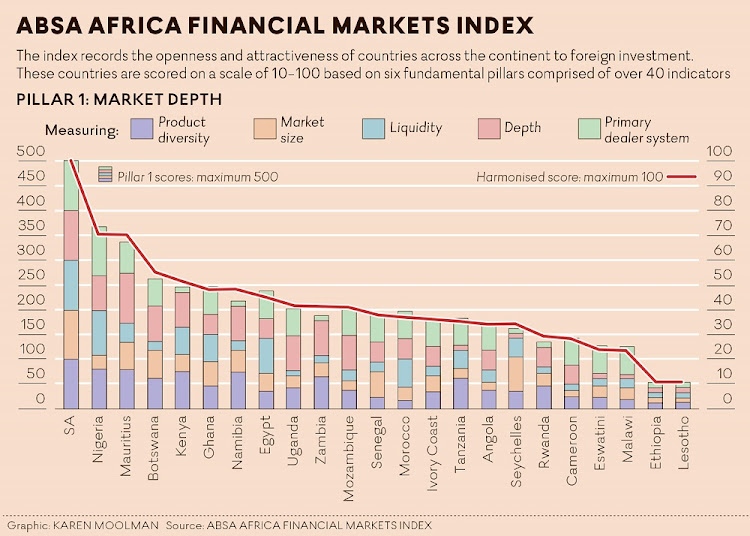 Looking at equity markets, the Seychelles’ Merj exchange attracted additional listings, leading it to be only one of three countries where market capitalisation increased over the year. The Stock Exchange of Mauritius amended its trading rules to open its market to international central securities depositories while Uganda launched its new primary dealer system designed to encourage secondary market activity.

Namibian pension funds have shown rapid growth in recent years and the country now has the highest level of pension assets per capita in the index, while Eswatini has the largest pension funds relative to the size of its local market, which shows the potential available for local investors to propel market development. Survey respondents highlighted several successful financial inclusion initiatives such as Angola’s Kwenda project and Mauritius and Nigeria’s embrace of fintech companies.

Egypt has invested in significant reforms that have not escaped the attention of global investment heavyweights and the Egyptian local bonds are now to be included in the prestigious JPMorgan Emerging Market Bond index — only the third African country to do so. The decision by policymakers to focus on long-term bond issuances of 20 years instead of shorter-term issuances is a sign of financial maturity.

Other notable reforms in Egypt include embracing a free-floating currency regime that has made a significant difference in attracting foreign capital flows. The equity market is ranked in the top three most liquid on the continent, with $50m-$60m of daily liquidity and a broad-based local investor franchise, while global investors are becoming increasingly more active in the market.

In 2008 when African financial markets were in their infancy, the liquidity crunch was felt across the bond, equity and foreign exchange markets and was characterised by the disorderly execution of trades and an extremely high liquidity premium.

Nowadays, the improved depth and better liquidity in African markets means a reduced illiquidity premium and savings at the macro level. These savings can be deployed into local infrastructure, which in turn drives the investment case for the region.

Sustainable finance is also becoming a watchword for African financial markets. Nigeria, Kenya and Egypt are among countries that have issued sovereign green bonds in the past year. Rwanda is establishing a green investment bank, while Uganda plans to develop a fund for post-disaster environmental restoration.

These kinds of innovations give me hope that we will build a more sustainable financial ecosystem that will solidify our markets against future shocks.

The events of 2020 have provided us with a chance to introspect and recognise just how far we have come when looking at the state of financial markets on the continent, but we now also have the chance to look forward to creating our own innovative financial tools.

The number of new research houses focusing on research on African financial markets is encouraging. The more information there is available, the more investors can make better educated decisions about risk and reward.

The African Fixed Income Initiative is critical for growing domestic markets. Improved liquidity translates into greater transparency and price discovery and this will attract foreign investors who are actively seeking decent yield in a low-yield world.

While I admire the innovation about the Coronabonds, which was listed on the London Stock Exchange, greater success will be achieved if such novel securities are cross-listed on African exchanges with a broad-based participation by African investors.

While there has been much focus on the African Continent Free-Trade Area agreement, this initiative is still in its infancy and we need to start having discussions about how we prepare financial markets to better facilitate trade in this area. Namibia and Botswana, for example, are geographical neighbours and yet the easiest way to settle a wholesale transaction across the borders is to go through another foreign currency.

As Africa emerges from the Covid-19 pandemic, my wish is to see governments, multilateral institutions and key companies use their balance sheets to facilitate and drive innovation in the financial markets.

The AFMI data show it clearly: the continent is no longer a collection of outlying frontier markets — we are a critical part of the global economy and we represent a very real investment opportunity. Can we seize this opportunity with both hands?

• Asante is head of global markets for regional operations at Absa Group.

MICHEL PIREU: Investing in small caps is about finding diamonds in the rough

Care needs to be taken when investing in smaller companies, but they can  provide opportunities for growth
Opinion
11 months ago

Pandemic forces rethink of trading tactics for SA and Africa

Pandemic forces rethink of trading tactics for SA and Africa