The civil uprising over racism and inequality in the US needs to continue, as Tulsa commemorates the 1921 massacre of black Americans 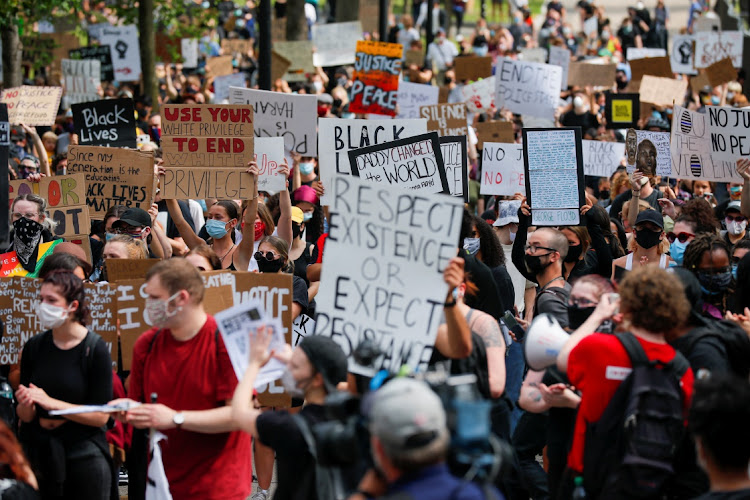 Protesters in Boston, Massachusetts, the US, June 3 2020. Picture: REUTERS/BRIAN SNYDER

One of the big problems with US President Donald Trump’s nostalgic view of the country’s history — “Make America Great Again” — it that it has always winked at the ghost of Jim Crow. Nowhere does that ghost haunt the promise of the American Dream more vividly than the city where Trump will hold his re-election campaign rally on Saturday night: Tulsa, Oklahoma.

Last week, as the country was engulfed in protests against racism, Trump announced that he would stage his first live campaign rally since the start of the coronavirus pandemic on, of all days, Juneteenth. The annual celebration of Juneteenth marks the date (June 19 1865) when word finally reached Texas that slavery was abolished and slaves were, at long last, free.

The president announced the rally on the same day he made a show of rejecting a public demand — supported by a growing group of military leaders — to rename military bases that still honour Confederate generals. This was just a few days after he had echoed rhetoric employed in the 1960s by former Alabama governor George Wallace and Southern sheriffs.

The Civil War was followed by generations of legalised and systemic oppression and theft, north and south: of black labour, black homes ... and, too often, black lives

After an eruption of public outrage, the Trump campaign pushed the rally back a day. But by holding it in Tulsa, the president is visiting a city with a history that reveals how important the national uprising against racism is — and how urgently we need to reckon with it through concrete action.

Ninety-nine years ago this month, white residents of Tulsa massacred more than 200 black residents and destroyed — looting, burning and ransacking — the thriving middle-class black neighbourhood of Greenwood. It was one of the ugliest chapters in American history, yet it remained buried — hardly spoken of — until recent years. And it was far from an isolated event.

Tragically for black America, and our whole country, the wreckage and ruins of Greenwood are a symbol of how the end of the Civil War was followed by generations of legalised and systemic oppression and theft, north and south: of black labour, black homes, black farms, black businesses, black wealth, black freedom and, too often, black lives.

As a result, the typical black family today has a 10th the wealth of typical white families — a statistic that is nothing short of a national disgrace.

In Tulsa, city leaders have come together to commemorate the 1921 massacre and engage in public education and dialogue around it. Although Trump never seems to talk about Greenwood, he could start on Saturday by telling his audience about the looting of black homes in Greenwood and what it cost black families.

He could discuss why no white people ever went to prison — while hundreds of black residents were arrested. He could explain how these kinds of injustices went on in communities across America for decades upon decades — and how their legacy is still felt by black families.

Sadly, Trump is more likely to use Greenwood, if he mentions it at all, as a prop to repeat his absurd claim that he has “done more for the black community than any president since Abraham Lincoln”. And so while Trump will fly in and out of Tulsa on Saturday, the rest of us need to keep talking about what Greenwood represents to our nation — and start confronting it more directly and forcefully.

I came face to face with Greenwood’s history when our foundation awarded Tulsa a grant to stage a public art project raising awareness about it. Listening to local leaders at the Greenwood Cultural Centre was a powerful learning experience — all the more so because, like nearly all Americans, I was never taught about it in school. It has been whitewashed from history books.

A year later, when my campaign for president was developing an ambitious plan for increasing black wealth and prosperity, I made a return visit to the Greenwood Cultural Centre to announce what we called, the Greenwood initiative. Our goals were to triple black wealth, double the number of black-owned businesses and increase the number of black homeowners by 1-million.

We cannot wish true equality into existence. We cannot pretend that time will heal old wounds. Healing begins with justice

In my speech, some people were surprised to hear me say that I would not have had the success I’ve enjoyed if I were black — but it’s true. And it bothers me a great deal, because it runs counter to everything I was taught about America — and everything I want America to be.

But we cannot wish true equality into existence. We cannot pretend that time will heal old wounds. Healing begins with justice. Justice requires admitting wrongs — not hiding from them, or excusing them, or rationalising them — and acting in good faith to right them. That is what we must do.

When my campaign ended in March, I was not willing to walk away from the principles behind our Greenwood initiative. They are too important. And so Bloomberg Philanthropies hired campaign staff members, who developed the initiative, to explore ways we could bring some of its ideas to life through our foundation.

Our work developing the Greenwood initiative is continuing, with the help of black leaders in every sector, and we are now more resolved — and optimistic — than ever. The uprising that has happened in communities across the country has been a powerful testament to just how hungry Americans of all colours are for leadership on issues of racial justice and equality. Change can’t wait for the next president and Congress.

So, even as Trump straps his political life to the backs of Confederates and segregationists, something good can come of his visit to Tulsa — if more Americans talk about Greenwood and the injustices it represents, and if we turn that dialogue into concrete actions in our own lives and communities, including exercising our power at the voting booth.

That’s the path we must walk, together, to finally redeem the true promise of Juneteenth.

The British establishment often is smug about US racism while failing to admit to deep prejudice within its own society in schooling, housing and ...
Opinion
10 months ago

The UK is selective about its slave-based colonial history

The much-vaunted British Empire, now deceased, was not built on the spirit of enterprise but on the backs of the colonised
World
10 months ago
Next Article