Pendulum is swinging towards LNG

Spot price is down, but that will improve its competitiveness while climate change favours it as well 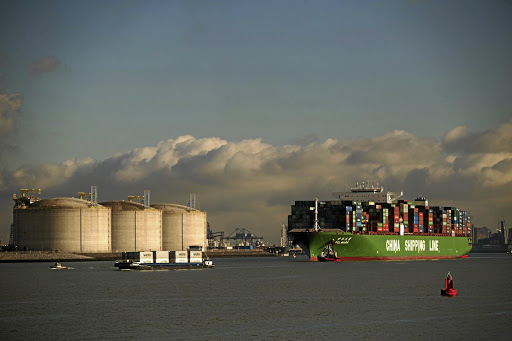 A container ship is guided into the port of Rotterdam as liquid natural gas storage silos stand on the shore. PICTURE: JASPER JUINEN/BLOOMBERG

Launceston — It has been an extremely weak start to the new decade for liquefied natural gas (LNG) with spot prices in Asia falling to more than 10-year lows, but it is not all doom and gloom for an industry that sees itself as part of the solution to climate change.

The average spot price for LNG delivered to north Asia for March dropped to $4 per million British thermal units in the week to January 24, with some cargoes trading at just $3.95.

At below $4 per mmBtu, the spot price is at the weakest in Asia since the summer of 2009, according to data from S&P Global Platts, the price reporting agency that assesses the benchmark Japan-Korea-Marker (JKM) price.

A combination of factors is working to drive prices lower, both structural and temporary. The temporary factor is that the northern Asian winter has so far been milder than usual, crimping demand for heating, and thus for LNG, in top importers Japan, China and South Korea.

There is nothing LNG producers can do about the weather, other than hope for a warmer than usual summer to boost electricity demand for air-conditioning, followed by a colder, or at least normal, winter in 2020/2021.

The structural factor is that the LNG market is now well-supplied given the completion of the last of eight new projects in Australia and the commissioning last year of four in the US.

It is likely that the current situation of oversupply will continue for some time, especially given the robust pipeline of new projects already under construction, as well as those being proposed. A further 17-million tons of annual LNG capacity is expected to be commissioned in 2020 in the US, and beyond this year there will be new supplies from Canada, Qatar, Mozambique and Nigeria among others.

The glut of LNG is both good and bad news for producers. It will obviously hurt the economics of new projects and lead to longer payback times on investment. However, it will also help to make LNG a more competitive fuel, especially in Asia, where it faces a struggle against both coal and renewables.

LNG was once described by an executive at an Indian power utility as the “champagne of fuels”. By this he meant that it was a great way to generate electricity insofar as it was cleaner than coal and just as reliable, but that it was also too expensive.

However, the economics are rapidly shifting, and while existing coal plants may still be able to operate more cost-effectively than existing natural gas generators, when it comes to new builds the dynamics are changing. While not applicable in every country across Asia, the economics of building and operating a natural gas plant using imported LNG is likely to prove competitive against doing the same with imported coal. That is because while coal is still cheaper to use for generation, the other factors are all swinging in favour of LNG.

The argument for LNG becomes more favourable if climate change and environmental factors come into play, especially if developed nations, such as those belonging to the EU, do go ahead with plans for carbon-adjustment tariffs, which would penalise goods and services produced with coal-fired electricity.

Of course, LNG also faces a threat from the rapid lowering of the price of renewables such as wind and solar, but it is here that cheaper LNG prices may ultimately work in the industry's favour.

If more Asian countries and utilities sign up to building LNG import facilities and gas-fired power generation, as well as switching to natural gas for industry and households, it will give the LNG industry a client base that will be hard to lose given the sunk cost of the capital invested to build the infrastructure.

With new coal mines and power plants increasingly finding it hard to access capital and insurance, the low price of LNG offers the industry an opportunity to seize, and maintain, market share.