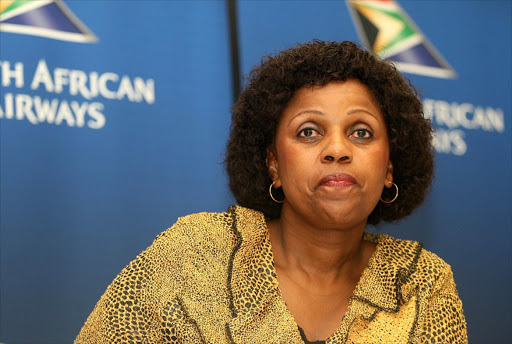 Former SAA chairperson Dudu Myeni has been slapped with a fine of R120,000, alternatively two years’ imprisonment, on charges of obstructing the administration of justice.

This after she intentionally unmasked the identity of an anonymous witness known as “Mr X” at the state-capture inquiry in 2020.

Myeni was sentenced by the Johannesburg magistrate’s court on Wednesday and opted for the fine, half of which is suspended.

Proceedings were slightly delayed on Wednesday due to her late arrival in court.

Myeni’s sentencing comes after she indicated during her November 14 appearance that she would plead guilty to all charges.

On Wednesday, through her legal team, Myeni said she was pleading guilty to the main charge levelled against her freely, voluntarily and without any undue influence.

Her legal team admitted before court that she intentionally revealed the whistle-blower’s name and her actions were not justified.

“The accused admits she had no justification for her actions and that due to her actions the true identity of Mr X was revealed to the public in contravention of the order made by the chairperson of the commission. She admits that at all material times, she knew her actions were wrongful, unlawful and punishable by law.”

Despite the admission of guilt, Myeni’s legal team persuaded the court to grant her a lenient sentence on the basis she is a first-time offender and has been without a source of income since 2017. The defence also argued she had shown remorse, co-operated throughout the case and had not attempted to flee the country.

Myeni said she understood the seriousness of the charge, which not only compromised Mr X’s safety, but that of his family.

Mr X, while giving evidence from a secret location to the state-capture inquiry, gave details of how his company was allegedly used in a looting scheme to siphon money from Mhlathuze Water, where Myeni served as chair.

Magistrate Simon Radasi ordered Myeni pay R30,000 on Wednesday and the outstanding balance on or before August 29.

What do you get if your cross a crooked president, the Gupta brothers and a corrupted ruling party? Hopefully, 20 years to life …
Features
1 month ago
Next Article

JABULANI SIKHAKHANE: Ramaphosa’s energy fix hinges on the leniency of his pet ...

JABULANI SIKHAKHANE: Ramaphosa’s energy fix hinges on the leniency of his pet ...