Fire has engulfed the entire roof of the National Assembly, parliament spokesperson says 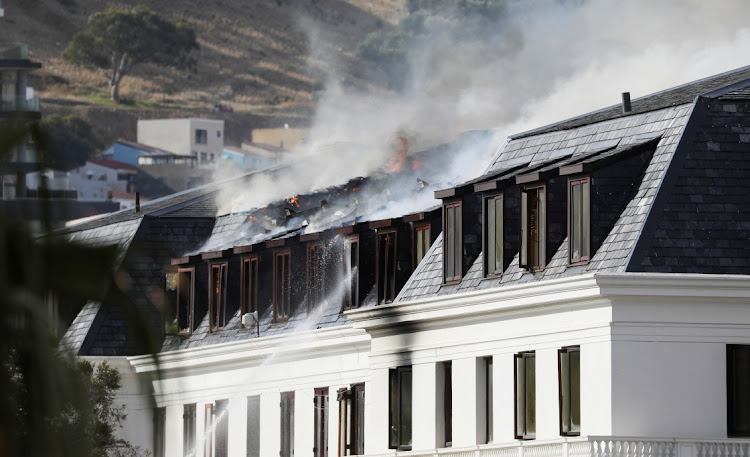 Firemen work at the parliament where a fire broke out in Cape Town on January 3 2022. Picture: REUTERS/SUMAYA HISHAM

A fire that ripped through parliament in Cape Town on Sunday causing extensive damage erupted again on Monday afternoon and has “engulfed the entire roof”.

"[The] raging fire has just re-emerged and it’s now engulfing the entire roof of the National Assembly,” said parliament spokesperson Moloto Mothapo. “It’s inexplicable as we thought it had been put out completely‚”

JP Smith‚ the mayoral committee member for safety and security‚ said a media statement would be issued in due course.

Cape Town fire and rescue service’s Jermaine Carelse also confirmed that the fire had “flared up” and that 34 firefighters were on the scene.

“The void beneath the roof sheeting of the National Assembly is on fire,” he said. “There are six firefighting appliances on the scene, as well as the hydraulic platform from Roeland Street fire station.”

Earlier, public works and infrastructure minister Patricia De Lille said a preliminary report by engineers on the extent of the damage and the cost and time-frame of the necessary repairs would be handed to her on Friday.

De Lille, Speaker of the National Assembly Nosiviwe Mapisa-Nqakula and National Council of Provinces chair Amos Masondo addressed a media briefing on Monday about the fire which started on Sunday and ripped through the parliamentary buildings.

The National Assembly has been gutted and the Old Assembly damaged but the NCOP chamber, the museum, artworks and the parliamentary library — which contains the historical collection of Hansards — have been saved, they said earlier.

De Lille said her department had brought in a team of electrical, structural and mechanical engineers to conduct the assessment of the damage. She said they were using a drone to assess the structure of the building until the temperature coolled down.

The temperature on Monday was about 100 °C, down from 400 °C on Sunday. A fire expert would determine where the fire started and a forensic team is also on site to determine the cause of the blaze.

Masondo said a multipronged investigation would get under way once the fire services handed over the parliamentary precinct to the police. Mapisa-Nqakula was due to meet the police at 4pm on Monday to be briefed about the arrest of a suspect.

A 49-year old suspect was held for questioning and will appear in court on Tuesday on charges of housebreaking, theft and arson under the National Key Point Act.

Masondo said no stone would be left unturned to find out what happened.

Mapisa-Nqakula insisted that the state of the nation address by President Cyril Ramaphosa and the tabling of the national budget by finance minister Enoch Godongwana — which are due to take place next month — would proceed as planned. The Cape Town Convention Centre has offered the use of its facilities for these events and Cape Town mayor Geordin Hill-Lewis has offered the city hall and the city council’s chambers.

Mapisa-Nqakula was adamant that she could not be held responsible for the fire for failing to implement the recommendations of a report which outlined the risks and loopholes in parliament’s security.

The recommendations form part of a plan to improve security, she said. She noted that she had only been in the job for about two and a half months and could not be accused of having “dropped the ball”. She was briefed by De Lille on the contents of the report once it became clear that she had not been briefed about it.

De Lille told reporters that the cameras in parliament were working but there had been no monitoring of them. An investigation would take place as to why the fact that someone had entered the building was not picked up earlier.

Update: January 3 2022
This story has been updated with additional information and background throughout.