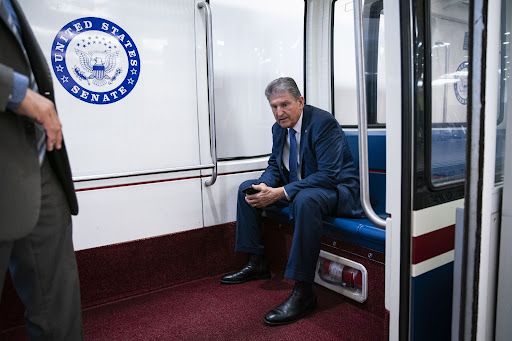 Senate Majority Leader Chuck Schumer is vowing to bring a revised version of the $2-trillion tax, climate and spending package to the floor for a vote as soon as this month, despite unresolved differences within his party that have stalled the legislation.

A snowstorm in Washington will slow many senators’ return to the Capitol and likely push off informal in-person talks for at least a day. A planned Monday night vote is expected to be delayed, a person familiar with the schedule said.

Schumer’s strategy still faces a major roadblock from West Virginia Senator Joe Manchin, who stunned Biden and fellow Democrats in late December by saying he wouldn’t support the House-passed bill and was walking away from negotiations.

To gain Manchin’s support, Democrats will need to reimagine their wide-ranging social policy bill that funds healthcare initiatives, climate programmes and new supports for children and families. Revising the bill will require scaling back some elements and cutting other programs entirely.

Congressional Progressive Caucus Chair Pramila Jayapal, a Washington Democrat, said on MSNBC Sunday that it’s urgent for the Senate to pass a version of the Build Back Better plan that Manchin can support. She said she believes it is still possible to pass a bill based on an outline Manchin and Biden negotiated before the House passing its $2.2-trillion bill.

“He said that he just can’t do the bill that we passed out of the House,” she said. “As you remember we added some things that were not in the framework.”

The House, for instance, added a paid leave provision. That bill also has Medicare hearing benefits that Biden put in his framework even though Manchin had never formally supported them.

Jayapal estimated that less than 10% of the House bill deviates from the Biden framework and urged the Senate to work quickly.

The economic package, universally opposed by Republicans, was supposed to be the centrepiece for Democratic campaigns as the party fights against long odds to maintain control of the House and Senate. Its components are popular in polls, especially an extension of the child tax credit that expired in December.

Progressive Democrats in the House, who for months have been at odds with Manchin and Arizona’s Kyrsten Sinema, the Senate’s other Democratic holdout, are pressing Biden to use executive action to achieve some of the legislation’s goals. But that tool has very limited applications and both sides must come to terms with what can pass with such narrow Democratic majorities in the House and Senate.

Manchin has said he’ll only support up to $1.75-trillion in spending paid for by tax increases on high earners and corporations.

Among his chief concerns is the impact of federal spending on inflation. So the consumer price index report due out January 12 will be a key indicator for the direction of the debate after December’s report showed prices up 6.8% year over year.

Democrats in any case plan to argue that the bill will actually bring down inflation in the long term because of provisions to lower healthcare and child care expenses.

“We know that BBB is the best tool we have to bring down the biggest cost families face: housing, child care, and healthcare — all while creating good-paying union jobs. I will work with my colleagues to enact the goals of BBB into law,” Senate Banking Chairman Sherrod Brown said in a statement.

The White House, which Manchin accused of bullying, will attempt to woo the senator in the coming weeks. Manchin gave Biden a $1.8-trillion counter-offer before walking away from the table, which could form the basis of a future deal.  The senator suggested scrapping expanded child tax credit payments and focusing instead on universal pre-kindergarten, renewable energy tax credits and expanded Obamacare subsidies.

Manchin has two sets of demands that will be especially hard for Schumer and Biden to meet.

One is that each programme bolstered in the bill must retain the same level of funding for at least 10 years. The bill as structured cuts off programs like the child tax credit expansion after one year, in the hope that a future Congress will extend it and come up with a new revenue source. Extending the credit for a full 10 years could cost $1.6-trillion, leaving room for little else under Manchin’s specified topline of $1.75-trillion.  That creates a political problem with progressives, especially in the House, who want a panoply of programmes in the bill.

Manchin also demands the bill do more to reverse former president Donald Trump’s signature 2017 tax cuts. Manchin supports raising the corporate tax rate to 25%, which the White House and House Democats would also endorse. But Sinema opposed raising the corporate tax and hiking rates on top-earning individuals. Instead, the bill creates a 15% corporate minimum tax that some Democrats acknowledge will be difficult to implement and enforce.

Manchin also wants to give the government’s Medicare program broader ability to negotiate drug prices, which Sinema also has opposed.

“If you’re going to negotiate then negotiate. Don’t start picking and choosing and playing games,” Manchin said of the drug provisions.

Schumer is looking to create a deadline for the ongoing talks with Manchin by forcing votes on the package in January, but it is not clear yet if that deadline will come and go just as Schumer’s Christmas deadline did.

“We are going to vote on a revised version of the House-passed Build Back Better Act — and we will keep voting on it until we get something done,” Schumer said in a letter to his colleagues at the beginning of the two-week recess.

The House is out until the week of January 10, but moderates there are urging Schumer and the White House to focus on a few key priorities and extend them for 10 years. They differ from Manchin in viewing the child tax credit as a must-have.

“Our priorities were the child tax credit, making sure we have a large investment in fighting climate change, and making sure that we keep the Affordable Care Act premium subsidies in place and address the coverage gap,” House New Democrat Coalition Chair Suzan DelBene said December 21 on the PBS NewsHour.

The Congressional Progressive Caucus, on the other hand, is advocating working off of the House-passed draft and having Manchin specify which programs he specifically objects to.

Jayapal said on Sunday that passing the bill is key to showing the public that Democrats can govern.

“Joe Biden and Democrats need to succeed in showing Americans we can get stuff done,” she said. But because it is “unclear” how long the Senate would need, Biden should take executive actions where possible, Jayapal added.

In advance of the talks Russian President Vladimir Putin and his US counterpart Joe Biden are due to discuss Ukraine and other subjects by phone ...
World
7 months ago

US President Joe Biden and Russian President Vladimir Putin are due to have a call on Thursday, the White House says
World
7 months ago
Next Article