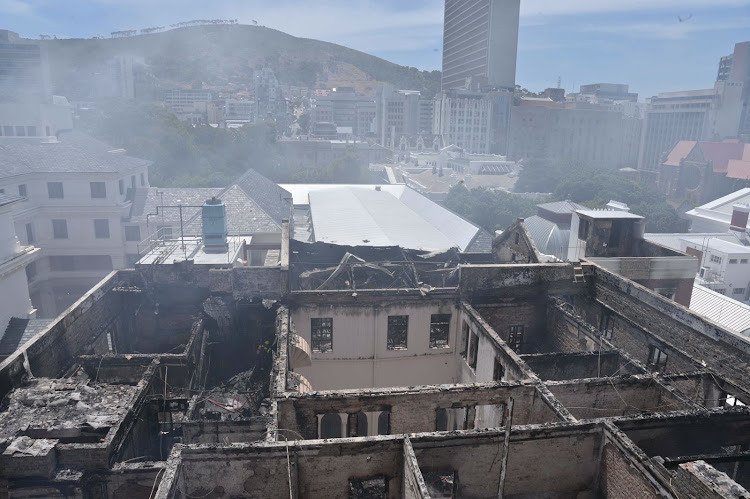 A view of the gutted buildings of parliament. Picture: CITY OF CAPE TOWN

A crew of about 10 firefighters are damping down the last hotspots after a fire in parliament’s National Assembly building on Sunday.

Fire and rescue services are attending to the fourth floor of the building which, according to mayoral committee member for safety and security JP Smith, is home to books and bookshelves which are smouldering.

Smith, who has been briefed by a senior fire officer at the scene, said the rescue services had scaled down resources from 9pm on Sunday and were hoping to be able to withdraw from the building within the next three hours.

A crew is damping down sections that are hot because heat was trapped.

The building is being ventilated.

He said that internally, the National Assembly was extensively destroyed by the fire, water, heat and smoke.

Metro ambulances are standing by but no injuries have been reported.

On Sunday, President Cyril Ramaphosa said the cause of the fire was being investigated.

The Hawks said a 49-year old suspect was being held for questioning and would appear in court on Tuesday.

Spokesperson Nomthandazo Mbambo said the suspect was not a parliament employee. She said he gained access to the precinct through a back window.

Mbambo said the man would be charged with housebreaking, theft and arson under the National Key Point Act.

Once the fire has been contained, structural engineers from parliament and forensic investigators will investigate.

Public works minister Patricia de Lille said it was a "very sad day for democracy in SA" after a fire broke out in parliament in Cape Town on Sunday ...
National
7 months ago
Next Article