The Banking Association SA estimates about R20m was stolen from 1,400 cashpoints 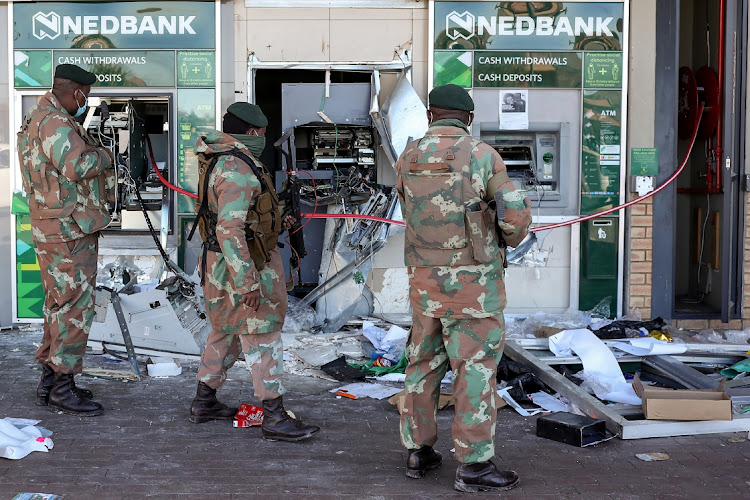 As much as R20m could have been taken, “however that is a rough estimate”, said Bongiwe Kunene, MD of the Banking Association SA.

Days of riots and looting earlier in July left more than 300 people dead and damaged thousands of businesses, including 269 bank branches.

Banks are still assessing the extent of the damage and developing recovery plans, with the indicative average replacement cost of an ATM at R385,000, Kunene told a media briefing.

“We haven’t been able to add up the exact numbers of how much was in the ATMs that were looted. What we do know is we’re working with estimates which are close to R20m, however that is a rough estimate,” Kunene said.

She said despite the disruption of cashpoints, there is no shortage of cash in the affected areas.

To help social grant recipients who live in areas where banking services are currently unavailable, customers will be able to use any ATM, including those not operated by their own bank, without incurring additional charges, from August 1 to September 30, Kunene said.

Rioting broke out on July 9 after former president Jacob Zuma started a 15-month jail term for contempt of court.

EDITOR’S NOTE: Slight comfort amid the alarm and despondency

In the middle of the unrest, Dubai-based DP World was seemingly dead set on acquiring Imperial Logistics
Companies
1 month ago

While most pundits were suggesting Trellidor as an unrest hedge, I have been wondering about the potential for Nu-World
Opinion
2 months ago

African Bank says 8% of branch network was hit by looting

The group says 32 of its 396 branches were hit by social unrest last week, and it is still counting the costs after extensive damage
Companies
2 months ago

Besides rooting out security threats, the government needs to single-mindedly drive pro-growth reform and economic stimulus
Opinion
2 months ago
Next Article