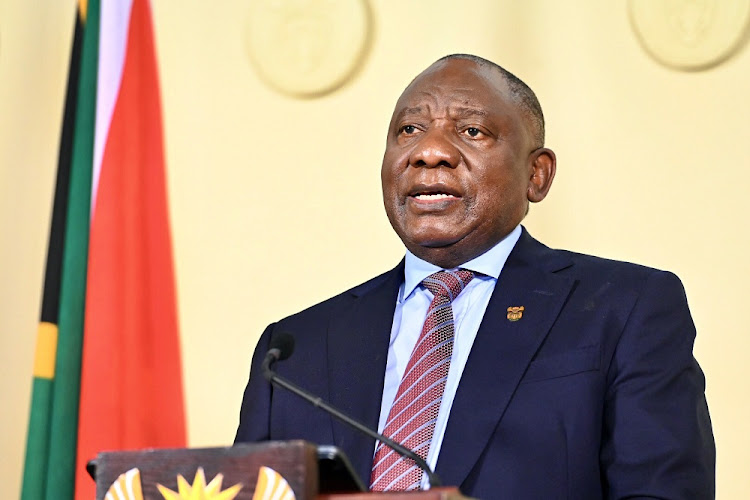 President Cyril Ramaphosa on Sunday night announced his government will tighten Covid-19 restrictions for 14 days as current containment measures are not sufficient to prevent a rise in infections.

Under the measures announced, all gatherings will be prohibited, there will be a curfew from 9pm to 4am and the sale of alcohol will be banned.

Public school holidays would be brought forward to Wednesday this week and travel to and from Gauteng, the epicentre of the third wave, would be limited to work and commercial purposes only.

Restaurants and other eateries will only be permitted to sell food for takeaway or delivery. “This is because it is not possible for patrons to wear masks while eating or drinking in these establishments,” said Ramaphosa.

Visits to old age homes, care facilities and other “congregant settings” will be restricted.

Ramaphosa said the Delta variant, first discovered in India, which is  spreading across SA, is much more contagious and causes more severe symptoms than the previous variant of the coronavirus in SA.

President Cyril Ramaphosa announces that SA will move to an adjusted level 4 lockdown on June 27 2021.

“We have walked a long road to deal and to address Covid-19 and we have been climbing many hills. We have made some missteps along the way but we have been climbing. As a country we have faced two devastating waves of coronavirus infections. We have overcome these by responding swiftly and decisively by acting together to contain the spread of the virus and to protect ourselves, our families and our communities. We now face another challenge, which is another hill to climb,” said Ramaphosa.

He was speaking as the country faces a third wave of Covid-19, which has mutated from the Beta to the Delta variant, affecting five provinces so far — the Eastern Cape, the Free State, Gauteng, KwaZulu-Natal and the Western Cape.

“SA is seeing a massive resurgence of infections. We are concerned about the rapid spread of this variant ... It is easier to catch this variant,” said Ramaphosa.

To date, the AU member states have reported more than 5.2-million cases and more than 138,000 deaths from Covid-19, he said.

“The Covid-19 virus that descended on our country in March of last year has been continuing to mutate, creating new variants.

“Our scientists tell us that Covid-19 has many variants. Last year we experienced what they called a Beta variant. In addition, we now have a Delta variant. This variant was first detected in India at the end of March of this year and is now found in 85 countries around the world.

“The evidence we have is that the Delta variant is rapidly displacing the Beta variant which has been dominant in our country until now. We are concerned about the rapid spread of this variant. First because it is more transmissible.

“As of today, the seven day average of new daily cases nationally has overtaken the peak of the first wave in July last year and will soon overtake the peak of the second wave we experienced in January of this year.

“Gauteng now accounts for more than 60% of new cases in the country. With the exception of the Northern Cape and the Free State, infections are rising rapidly in all the provinces.

“The first wave lasted 15 weeks. The second wave lasted nine weeks. We don’t know how long this one will last, but indications are that it could last longer.”

Ramaphosa's comments come after an expert briefing to the national coronavirus command council (NCCC) at the weekend, which highlighted a surge in infections attributed to the Delta variant. Globally, the strain is reportedly causing more severe sickness and hitting younger people particularly hard.

Gauteng has seen record-breaking levels of infections over the past week, putting hospitals under strain. Acting health minister Mmamoloko Kubayi warned on Saturday that data was showing that “other provinces are going to experience the trend we are seeing in Gauteng, notably in the Western Cape and the Eastern Cape”.

On Sunday evening, the National Institute for Communicable Diseases (NICD) said there are 158,998 active cases in the country with 15,036 new cases reported in the latest 24-hour cycle. This increase represents a 26.9% positivity rate.

Gauteng accounted for the majority of new cases (66%), followed by the Western Cape (9%).

A further 122 Covid-19 related deaths have been reported, bringing the total number of fatalities to 59,900.

An increase of 361 hospital admissions have been reported in the past 24 hours, said the NICD.

SA has vaccinated more than 2.68-million people so far, since beginning with health workers and the elderly. The education sector is also on track to finalise its inoculations within 10 days.

From Thursday July 1, SA is opening up vaccine registration to citizens that are 50 to 59 years old, and these inoculations will begin from July 15.

J&J, she said, had so far delivered 500,000 early access doses used for Sisonke, 300,000 market doses earlier in June and 1.2-million doses which landed on Thursday night. “These [single shot] doses all need to be used by August 11. We are awaiting confirmation for delivery of 500,000 doses [which expire later] and this then makes up the 2-million to replace those that were lost to the contamination incident [in the US].

“With this flow of vaccines, we will be able to press ahead with the vaccination of front-line workers sector by sector. We will then move on to workplace vaccinations — both formal and informal sectors like the taxi industry,” said the minister.

While the ANC welcomed Ramaphosa’s announcement, opposition parties were scathing:

ANC spokesperson Pule Mabe said: “We welcome the measures announced by the president, they are necessary to flatten the curve. We must all co-operate with government’s efforts to fight the coronavirus.”

DA leader John Steenhuisen said: “The big thing missing tonight is where the vaccines are. Ramaphosa is being fundamentally dishonest about vaccines. He said 2-million people will be vaccinated by the end of March. Countries like Zimbabwe … are way ahead of SA in terms of vaccinating their population. The president is ducking for cover here, he doesn’t want to take responsibility.”

EFF spokesperson Vuyani Pambo said: “We are not going to listen to nonsense. The lockdown regulations are not helping us, the answer is not lockdown. We should be vaccinating our people. Russia and China are saying ‘we have 50-million vaccines for you’, but the president is not interested in making sure the people of SA are vaccinated. The world over has got vaccines, this government does not prioritise lives.”

Freedom Front Plus leader Pieter Groenewald said: “If the government had responded timeously to ensure that we have vaccines, we wouldn’t be in this situation. We are now paying the price because they didn’t do their job.”

IFP spokesperson Mkhuleko Hlengwa said: “The country is in dire straits, the pandemic taken over the country. The president places heavy resilience on vaccination, but it’s moving at a snail’s pace. The government is talking left and walking right, we have by-elections on Wednesday.”

Prof Koleka Mlisana, the head of the ministerial advisory committee on Covid-19, says there is an urgent need to intensify the lockdown to restrict ...
National
1 month ago

READ IN FULL: Ramaphosa says SA is in the grip of a devastating third wave

READ IN FULL: Ramaphosa says SA is in the grip of a devastating third wave