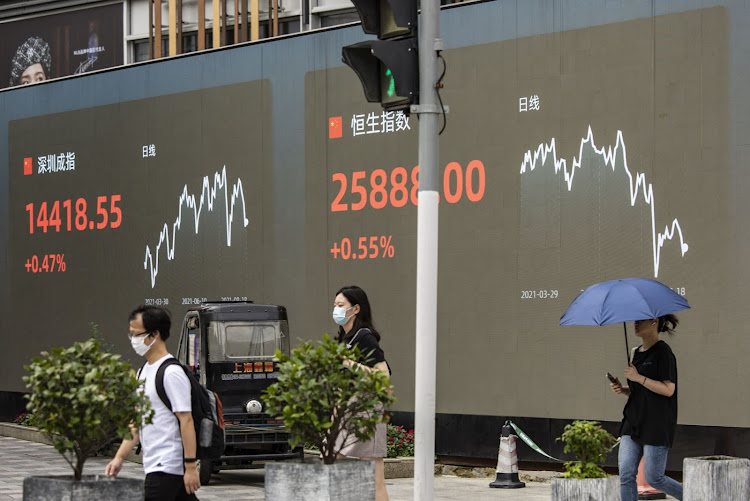 Hong Kong — Asian shares gave up early gains to fall again on Thursday, weighed down by declines in China and Hong Kong, even after a strong lead-in from Wall Street, which had also pushed the dollar to the lower end of its recent range.

MSCI’s broadest index of Asia-Pacific shares outside Japan was last down 0.45%, while Japan’s Nikkei, shed 0.47%, after hitting a 31-year high on Monday.

“It’s a bit choppy and uncertain at present, we’ve had a few soft days on the back of worries about global growth and then suddenly markets, at least US markets, conclude ‘it’s not that bad after all’," said Shane Oliver, chief economist at AMP Capital.

He added worries about inflation and supply chain issues could still weigh on shares in the coming weeks, and “of course in Asia we've got a slowdown in China”.

There were gains on Thursday in Australia, up 0.65%, but the Hong Kong benchmark fell 0.42% with property names continuing to drag — embattled developer China Evergrande Group fell another 8%

Overnight US stocks closed higher, as rising crude oil prices boosted energy shares and a raft of positive US data supported those who feel growth in the world’s biggest economy should remain strong.

That risk-on mood pushed the dollar lower overnight against a basket of other major currencies, but it was little changed in Asian hours, with analysts at Westpac saying the greenback was looking set in its recent range.

They said payroll and inflation data meant the US Federal Reserve could take its time tapering its huge asset purchases — which would typically boost the dollar — while the “downside is unlikely to develop anytime soon either, with concerns about Delta’s (coronavirus variant) impact on global rebound prospects continuing to swirl, as underscored by China’s weaker August activity data.”

US treasury yields inched down in Asian hours with the yield on benchmark 10-year treasury notes at 1.299% compared with its US close of 1.304%. Westpac analysts said this, too, looked likely to be largely rangebound.

Oil prices retreated, giving up some of this week's strong gains on the back of a larger-than-expected drawdown in crude oil stocks in the US.