As the incoming US treasury secretary, Yellen is expected to bolster the case for heavy fiscal stimulus in the country 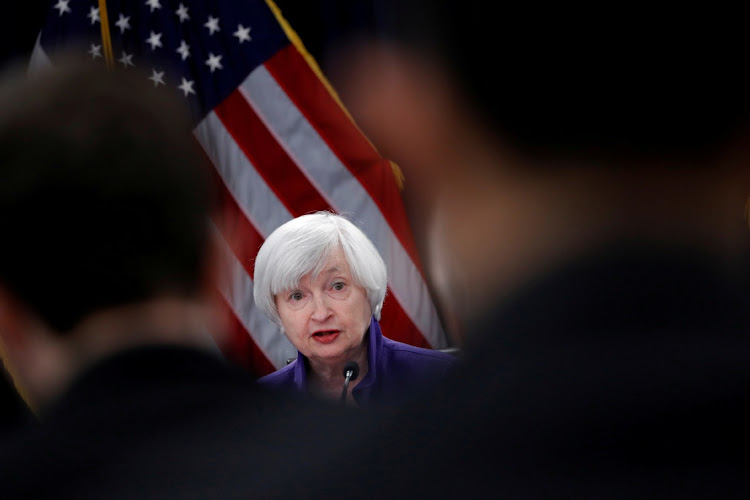 Milan/Sydney — Global shares climbed and the dollar eased on Tuesday ahead of Janet Yellen’s US treasury secretary confirmation speech, in which she is expected to bolster the case for heavy fiscal stimulus in the world's largest economy.

Concerns that pandemic lockdowns could slow the road to economic recovery faded into the background as markets prepared for possible positive surprises from the earnings season.

Wall Street looked set for a strong start, with S&P 500 futures rising 0.6% and Nasdaq futures up 0.9% after the long holiday weekend.

"If the growth rate generated by government investment in infrastructure or people exceeds the cost of borrowing, it is a worthwhile exercise."

Yellen will tell the Senate finance committee that the government must "act big" with its next coronavirus relief package, according to her prepared statement seen by Reuters.

Asian shares had climbed on investor expectation that China's economic strength would help to underpin growth in the region. MSCI's broadest index of Asia-Pacific shares outside Japan rose 1.5% to a record high.

Data on Monday confirmed that the world's second-largest economy was one of the few to grow over 2020 and actually gathered pace as the year drew to a close.

Analysts at JPMorgan felt the coming earnings season could brighten the mood, given that the consensus in Europe was for a 25% fall year on year, setting a very low bar.

"The projected EPS (earnings per share) growth in Europe now stands at the lows of the crisis, which seems too conservative and could likely lead to positive surprises over the reporting season," they wrote.

The same could be true for the US, where results from BofA, Morgan Stanley, Goldman Sachs and Netflix are due this week.

Despite the risk-on mood on Tuesday, dealers were wary ahead of US president-elect Joe Biden's inauguration on Wednesday, given the risk of more mob violence.

In foreign exchange markets, the dollar slipped from close to its highest in nearly a month as caution set in before Yellen's speech.

In fixed-income markets, Italian 10-year bond yields fell slightly to 0.592% ahead of a confidence vote in the Senate that could force Prime minister Giuseppe Conte to resign.

But expectations that snap elections are unlikely, coupled with ECB stimulus to fight the adverse effect of the coronavirus crisis, limited any sell-off.

Crude oil prices firmed on optimism that government stimulus would buoy global economic growth and oil demand. Brent crude futures rose 0.7% to $55.40 a barrel and US crude was up 0.5% at $52.60.

JSE lifts as eyes turn to incoming US administration

Investors will be watching Joe Biden’s inauguration speech on Wednesday for details on the country’s $1.9-trillion stimulus package proposal
Markets
3 months ago