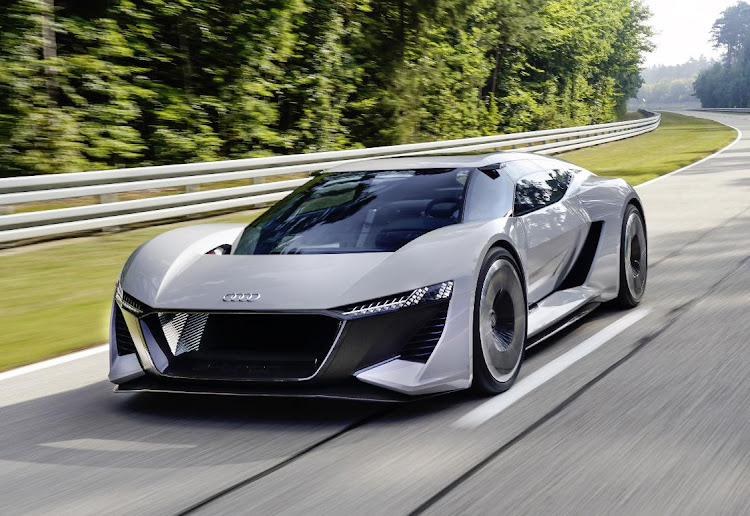 The Audi PB18 E-tron gives a glimpse into what Audi says will be possible in a few years. Picture: NEWPRESS UK

Audi has continued to build its zero emission credibility with the reveal of its PB18 E-tron concept car at the Quail exhibit during Monterey car week in the US.

The German brand, which is due to launch its first production battery-electric car, the E-tron crossover, in SA in 2019, delivered a stunning-looking shooting brake-style machine with a movable seat.

It will stun in more ways than looks, though, with a 0-100km/h punch in just two seconds thanks to a 150kW electric motor on the front axle, 350kW from two electric motors on the rear and a temporary ability to get up to 570kW on overboost.

Normally boasting 500kW from its total system power, it’s only fractionally slower in a straight line than Audi’s retired LMP1 Le Mans racers and uses a radical solid-state battery, which isn’t expected in production cars until at least 2024.

The driver’s seat and steering wheel of the Audi PB18 E-tron can be moved to either side of the car or even in the middle. Picture: NEWPRESS UK

With 830Nm of instant torque, it has a torque control management system that holds hands with the stability control system to instantly refine the concept’s maximum pace in corners. It can be speed limited in traffic, but let loose on a racetrack or changed to suit local conditions such as highways or autobahns.

It has taken lessons from both Formula E and Audi’s LMP1 program to recover large amounts of energy, with the electric motors solely responsible for most of the braking up to emergency levels of stopping power.

It does all this with a liquid-cooled solid-state battery with 95kWh of electrical energy and 500km of range on the newer WLTP cycle. It also swallows 800V of charging power, allowing it to be fully recharged in only 15 minutes. There’s also induction charging, via a charging pad on the floor.

It would allow for one specification worldwide, because it can move the driver’s seat and steering wheel from the left to the right or even to the middle of the car.

“We want to offer the driver an experience that is otherwise available only in a racing car like the Audi R18,” the head of Audi’s Design Loft studio in Malibu, California, Gael Buzyn, said.

“That’s why we developed the interior around the ideal driver’s position in the centre. Nevertheless, our aim was to also give the PB18 E-tron a high degree of everyday usability, not just for the driver, but also for a potential passenger.”

It purposely steered clear of autonomous technology, with Audi instead trying to focus on putting the sexiness into electric vehicles with a development project codenamed Level Zero.

Instead of using one of the Volkswagen Group’s four available battery-electric architectures, the PB18 is loosely based around the R8’s mid-engined architecture.

The aluminium chassis is clad in carbon and composite panels to save weight, and rides on 22-inch wheels and it looks suspiciously like it was inspired by Lamborghini’s Espada coupe.

It rides on a 2.7m wheelbase and despite the performance, it still delivers a 470 luggage area.

It has active aerodynamics, too, with the rear diffuser and the rear spoiler moving up and down mechanically to increase mid-corner grip.

Customers expect quality service — and will say so

The M5 Competition could have been called the M5 Handling Package, writes Michael Taylor
Life
3 years ago
Next Article