What would a Moody’s downgrade really mean for SA?

After reprieves from S&P and Fitch, SA is holding onto its last investment-grade rating by a thread 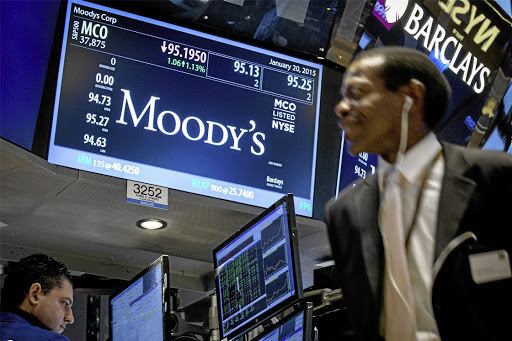 As SA’s fiscal position and growth performance slips, it is a question of when the country will be downgraded by Moody’s Investors Service, rather than if, most analysts say.

SA is still clinging to its final investment-grade rating by a thread.

Moody’s didn’t publish a review as scheduled in October, while S&P Global Ratings and Fitch Ratings have kept their subinvestment-grade assessments with a stable outlook. SA has till February’s budget before the ratings agencies make another call.

In the last few weeks, both S&P and Fitch have given SA the benefit of the doubt, with stern warnings that low growth and high inequality could raise the risk of social tension over the medium term.

This, of course, provides little consolation as S&P and Fitch both downgraded SA to junk status in 2017, in response to the surprise cabinet reshuffle and an unfavourable medium-term budget policy statement in October.

But S&P did say that the government’s economic reform should boost growth modestly from 2019, helping to contain the rise in government debt.

Fitch acknowledged that progress had been made with the stimulus package, the revised mining charter and the reprioritisation of spending; however, it warned that these “measures will take time to implement and are not sufficiently far-reaching to raise medium-term potential growth significantly”.

Despite the reprieve, the country isn’t off the hook yet. Close attention will now be paid to the February 2019 budget policy statement and the 2019 elections.

“It’s evident that SA is on borrowed time and that tangible progress on growth, structural reform, fiscal consolidation and governance at SOEs would be needed to prevent further slippage in SA’s credit ratings in coming years,” NKC African Economics economist Elize Kruger says.

While Moody’s did not make a move as expected in October, it did warn that the medium-term budget policy statement, which “unveiled a weaker fiscal outlook”, was credit negative.

SA’s collective sigh of relief as Moody’s scheduled date went by ensured that the investment-grade rating kept the country's rand-denominated debt in the key global bond indices, which attracts investors

A decision by Moody’s to push the country debt into junk would see SA fall out of key gauges such as Citigroup’s World Government Bond index (WGBI), which may prompt investors to dump as much as R100bn worth of SA assets. This would sharply increase the cost of debt and pressure the exchange rate.

It wouldn’t be an immediate move. Moody’s would first need to change SA’s outlook to negative, which signals a future ratings downgrade. This would give the more optimistic of the rating agencies space to eventually downgrade SA to junk.

If SA loses its last remaining investment-grade rating, there would be disastrous consequences for the country and consumers, who are already under strain from tax increases.

A downgrade from Moody’s would lead to an increase in the borrowing costs for both the private sector and government, which will put more strain on consumers as costs go up.

But it isn’t all bleak. In fact, another downgrade may not spook investors as much as expected, Hauner said.

“Even without the WGBI, SA will still be a favourite among emerging markets for global investors,” he said.

This is because SA is a liquid market, still maintains strong institutions such as a credible central bank, has favourable interest rates and a strong yield curve, he explained.

“SA will still be key for investors who want to have portfolios in emerging markets.”

Whether this rings true and SA emerges unscathed from another downgrade remains to be seen, but what is clear is that the sentiment among investors and economists alike points to a full house at junk status.

President Cyril Ramaphosa is sending all the right signals to investors to reduce policy uncertainty, IFC says
Economy
3 years ago

SA, along with Turkey, Argentina and Brazil, is under pressure due to varying combinations of external exposure, weak institutions, unpredictable ...
Economy
3 years ago

‘The broadly unchanged spending ceilings will be challenging to meet as the government aims to strike a balance between economic, social, and fiscal ...
Economy
3 years ago
Next Article

WATCH: What the Carbon Tax Bill will mean for industry

WATCH: What the Carbon Tax Bill will mean for industry