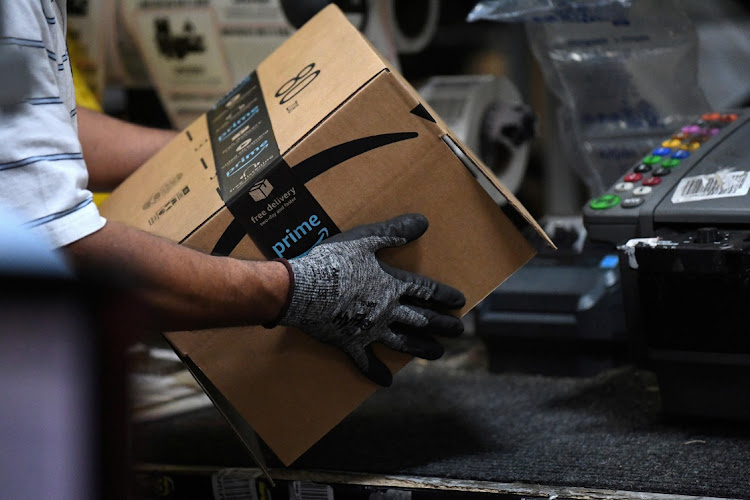 A worker assembles a box for delivery at the Amazon centre in Baltimore, Maryland, the US. Picture: REUTERS/CLODAGH KILCOYNE

Amazon.com boosted pay as it looks to hire 125,000 warehouse and shipping workers amid a tight US labour market.

The e-commerce giant said starting wages for open jobs in logistics average $18 an hour, or 20% more than the $15-an-hour base pay the company set back in 2018, with signing bonuses of as much as $3,000 in some locations. Earlier in September, Amazon pledged to hire 40,000 people to fill corporate and tech roles.

A nationwide labour shortage has US companies scrambling to find workers as the economy recovers from the pandemic. They’re boosting pay, offering signing bonuses and offering education perks.

In another effort to sweeten the pot and keep up with rivals, Amazon last week said it would pay college tuition for some frontline employees. Walmart in July said it would pay the costs of tuition and books for its hourly staffers. Target in August said it would offer free undergraduate degrees to more than 340,000 employees at its US stores.

Amazon typically ramps up hiring in the fall to ensure it has enough workers for the crucial holiday shopping season, and often kicks that off with a string of announcements about its hiring goals.

“It is competitive out there, but we like that environment,” said John Felton, senior vice-president of global delivery services. “It’s critical for us to make sure we are very competitive. We think that’s the right kind of experience for employees, and allows us to attract amazing, high-quality employees.”

The company has been on a recruiting tear of late, adding more than 400,000 workers in 2020 as the pandemic sent locked-down shoppers rushing online. Last year, Amazon added about one logistics facility a day, and is likely on pace to exceed that total in 2021. The company on Tuesday said it had opened more than 250 new fulfillment and sorting centres, delivery stations and air-cargo hubs in the US, and will open 100 additional buildings in September.

The company employed 950,000 people in the US at the end of June, out of 1.3-million worldwide. Most of those people work in the company’s huge logistics division, primarily in the warehouses that store and pack items. Amazon shares were up slightly in New York on Tuesday morning.

Amid the hiring spree, Amazon has been roiled by labour unrest, including a failed attempt to unionise a facility in Alabama. Jeff Bezos earlier in 2021 pledged to focus more on the welfare of Amazon workers, a sentiment echoed by his successor, CEO Andy Jassy.

Securing steady supplies of fruit, vegetables and other groceries is seen as crucial to dominating Indian e-commerce
Companies
11 months ago