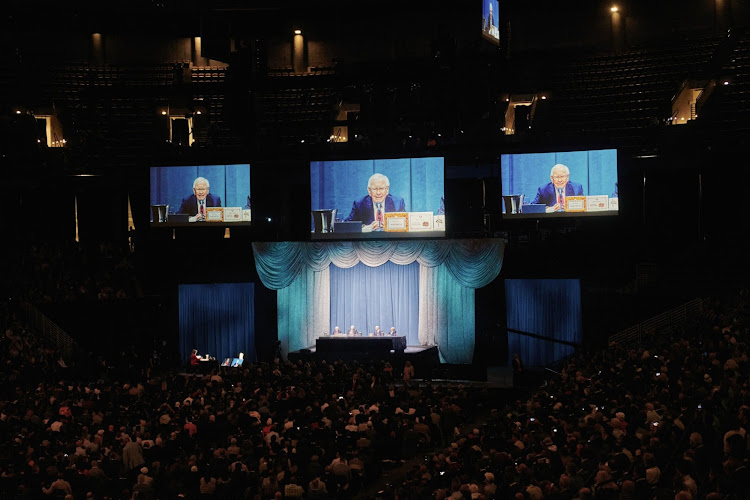 Warren Buffett is seen on screens during a Berkshire Hathaway annual meeting in Omaha, Nebraska, the US. Picture: BLOOMBERG/DAN BROUILLETTE

Berkshire Hathaway added new investments in Citigroup and several other companies in the first quarter, as Warren Buffett’s conglomerate took advantage of volatile stock markets to invest $51.1bn that had largely been sitting in cash.

Omaha, Nebraska-based Berkshire said it sold nearly all of an $8.3bn stake in Verizon Communications that it had amassed in late 2020.

Berkshire also finally exited Wells Fargo & Co, a 33-year-old investment that Buffett soured on after finding it too slow to address revelations that employees had mistreated customers, including by opening unwanted accounts.

Buffett’s company ended March with $106.3bn of cash and equivalents, down from a near-record $146.7bn three months earlier, largely reflecting the new investments.

Citigroup, where Berkshire invested nearly $3bn, has embarked on a multiyear plan to boost performance and a share price that in recent years has lagged larger rivals JPMorgan Chase and Bank of America, the latter a major Berkshire investment.

Some investors have described Markel as a small-scale version of Berkshire, and Buffett in March committed $11.6bn to buy another insurance holding company fitting that description, Alleghany. Berkshire also owns several companies specialising in Celanese's sectors.

Monday’s filing does not say which investments were made by Buffett and his portfolio managers Todd Combs and Ted Weschler.

Most large Berkshire investments are Buffett’s. Stock prices often rise after Berkshire reveals new stakes because investors view the investments as a stamp of approval.

At Berkshire's annual meeting on April 30, Buffett said investors were too focused on flashy stocks, causing markets at times to resemble a casino, allowing him to focus on stocks that Berkshire understands and which add value.

Analysts have also viewed Chevron and Occidental as a way for Berkshire to benefit from rising oil prices following Russia’s invasion of Ukraine.

“I wish the rest of the world worked as well as our big oil companies,” Berkshire vice-chair Charlie Munger said at the annual meeting.

DAVID SHAPIRO: There might not be Gorat’s burgers, but Buffett is still a treat

There were insights aplenty at Warren Buffett's latest investor pow-wow. Jean-Pierre Verster rounds up some of Berkshire's recent bets
Opinion
2 months ago