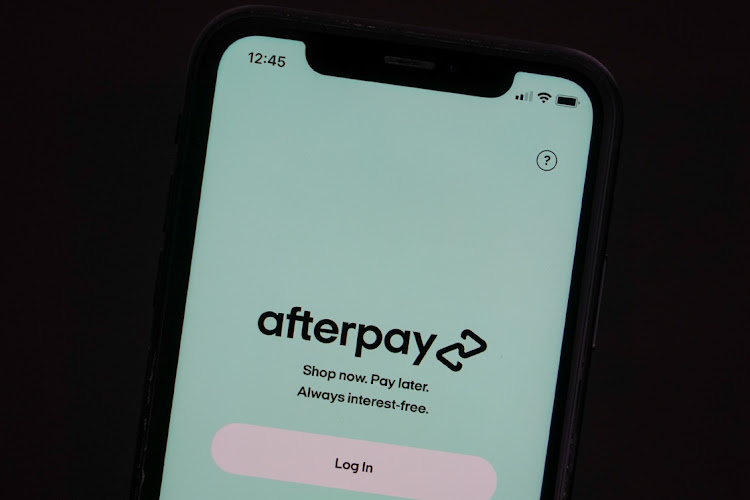 The Afterpay app is seen on the screen of a mobile phone in a picture illustration taken August 2 2021. Picture: REUTERS/LOREN ELLIOTT

Sydney — A tweet by Kim Kardashian promoting Afterpay as a way to buy her beauty products may have proved pivotal for the Australian buy-now, pay-later pioneer, whose founders have since joined the reality TV superstar as billionaires.

Kardashian’s recommendation in 2018 helped Afterpay, which has agreed to a record $29bn buyout by Square, the payments firm of Twitter founder Jack Dorsey, crack the US market.

Afterpay’s rapid rise, which has culminated in Australia’s biggest-ever deal and powered its stock market to record highs, began when an eBay vendor noticed young people avoiding credit cards after the 2008 financial crisis.

“It all started from seeing a shift in 2008 of millennials toward debit cards over credit cards,” Afterpay co-founder Nick Molnar said in a 2020 Reuters interview.

Molnar, 31, sold jewellery from his bedroom while studying commerce at the University of Sydney, and he and Melbourne-headquartered Afterpay co-founder Anthony Eisen were neighbours.

He and Eisen, a 49-year-old former fund manager who specialised in tech firms, will each pocket A$2.46bn ($1.8bn)  from the Dorsey-led deal and stay on at the company.

Australian media have widely reported that Molnar is the country’s youngest self-made billionaire. Alongside Eisen, he was ranked fifth- richest among Australian executive directors, the Australian Financial Review reported in July.

The friends’ success is built on the idea that they could offer shoppers a small loan that they would pay back in instalments, with the incentive that they could make more purchases if they repaid on time.

Afterpay would take a cut of 4%-6% of the shelf price from the merchant, who would use its services to drive business.

They took the business live in 2014, picking up big-name clients such as Woolworths, Myer Holdings and Wesfarmers’ Officeworks. And just three years later it merged with its technology supplier, Touchcorp, to create an all-in-one service.

From 2017, Afterpay could vet shoppers and direct them to stores, while processing loans and repayments. Due to its low dollar value loans and its appeal to shoppers, Afterpay says it has lower default rates than other consumer loan methods.

However, the ride to riches for Molnar and Eisen has not always been smooth as Afterpay came under regulatory scrutiny both in Australia and the US.

In 2019 Australia’s anti-money-laundering agency ordered an independent audit of Afterpay, citing “concerns with its compliance” and the rapid growth of buy now, pay later. It was subsequently given the all-clear.

And in 2020, Afterpay paid A$1.5m to Californian regulators who said it was operating illegally since it started writing business there before it had a licence. The company denied any illegal behaviour.

Afterpay bagged a Tencent investment in May 2020, sparking a protracted run-up as investors aligned their portfolios with the Chinese online giant.

And a boom in online shopping during the Covid-19 pandemic, driven by fiscal stimulus cheques, sealed its lofty valuation.

Although Afterpay has yet to turn a net profit, it is one of Australia’s 20 largest companies, alongside financial powerhouse Macquarie and telecoms giant Telstra.

Monday’s deal locks in a stock valuation that some analysts have said is overpriced amid uncertainty around the Covid-19 Delta variant, varying levels of government relief funding and warnings that interest rates must rise from record lows.

“It’s a market defining transaction. It really moves the needle and validates the work that Afterpay have been doing,” said Emanuel Datt, founder of Datt Capital which bought Afterpay shares at around A$7 in 2018 and predicted a buyout this year.