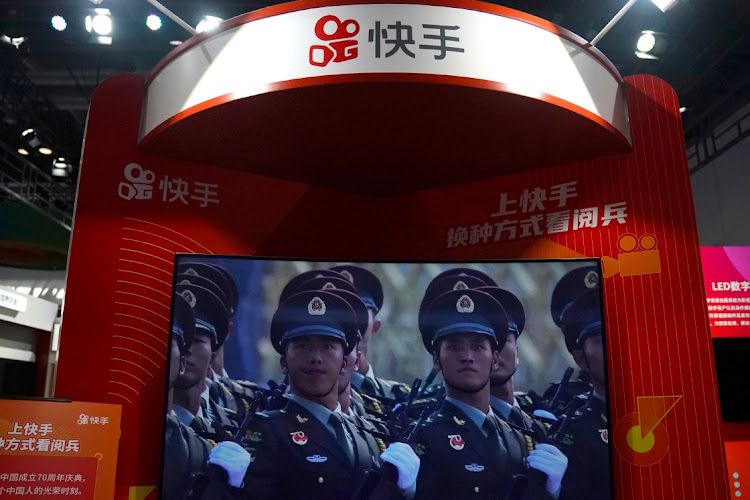 A screen showing footage of a military parade is seen at a booth of Chinese video-streaming company Kuaishou, at a fair in Beijing, China. Picture: REUTERS/TINGSHU WANG

Hong Kong/Tokyo — In 2014, as their video app Kuaishou began to take off, Su Hua and his co-founders started looking for money to expand. They quickly got a proposal from Ruby Lu, a venture investor who had spotted them earlier as promising engineers and given them feedback on previous businesses.

But Lu’s proposal was trumped by a larger venture firm with a much higher offer, according to people familiar with the matter. She refused to concede. Lu pitched Su and his team that she would give them more than money, offering her personal engagement and the support of her partners at DCM Ventures. She won, even with a lower offer.

On Friday, Kuaishou Technology started trading in Hong Kong after the biggest initial share sale for an internet company since Uber in 2019. By any yardstick, Lu’s investment has been a home run: the roughly $40m that DCM put into Kuaishou is now worth about $14bn after the stock more than tripled over its first three days.

“There is a methodology in building a company from scratch,” said Lu, in her first interview in years. Part of her strategy is to identify talented engineers like Su, but they also need to have the right strategy and mindset. “You have to endure more pain than the usual person.”

Lu belongs to an unusual group of female investors who have risen to the forefront of China’s venture capital world. In 2019, she started her own firm, Atypical Ventures, which seeks to groom China’s next generation of tech darlings using finance from US institutional investors.

It was the next step in a life spent as a bridge between the two countries, which started when a US couple invited her to live with them in Maryland and ended up paying for her undergraduate education. Then came a stint working on IPOs at Goldman Sachs’s investment bank at the height of the dot-com bubble, and later a pivot into start-up investing.

It all started in 1989, when Lu bumped into Fred and Virginia Pausch on the streets of Xiamen, the southeastern Chinese port city where she grew up. The couple, in town to help with English language instruction, took a liking to her, inviting her to live with them and study in the US. Lu’s parents gave permission — provided the teenager herself collect more than 30 approvals needed to travel overseas. When she succeeded, her mother sewed $200 into her underwear in case she needed to escape.

“It would have been impossible for anyone else,” said Tammy Pausch, the daughter of the couple. “With Ruby almost nothing is impossible.”

Her new “brother” in the US was Randy Pausch, who went on to become a computer-science professor famous for his “Last Lecture.” He often said he won the “parent lottery”.

Lu’s English was poor when she arrived and she understood little in her classes. So Fred Pausch got her a tape recorder she could use to review lectures at home. She finished top of her class in economics at the University of Maryland, Baltimore County, then did a master’s in international studies at Johns Hopkins University.

She got a job in Goldman’s investment bank in 1996, first working from Hong Kong to help China’s state-owned companies go public and later moving to the US. It was eBay’s IPO that hooked her on technology, prompting her to change her focus and relocate to Goldman’s tech division in Menlo Park, California. “After that there was no return,” she said.

Lu left Goldman in 2003 to join DCM Ventures, the Silicon Valley firm set up by David Chao and Dixon Doll. There, she co-founded DCM’s China business to capture what she calls “time and geographic arbitrage,” in which ideas that had worked in Silicon Valley were adopted in China. At that time, Chinese tech giants like Alibaba and Tencent were still in their early years. Some of Lu’s top investments at DCM followed this pattern, such as the Amazon-style e-commerce site Dangdang and the online car dealer Bitauto.

But her biggest success is a very different story. Kuaishou, like its rival TikTok owned by ByteDance, is a Chinese idea that’s gone global. The two outfits — both started less than a decade ago — pioneered the live-streaming and bite-sized video format that’s since been adopted around the world by the likes of Facebook  and YouTube.

Kuaishou’s Su was on her radar long before he built the short-video app. They became friendly while Su was developing an AI-based ad recommendation system for Chinese search leader Baidu. After Su left Baidu, Lu didn’t hesitate to back his ventures, first an online bazaar for second-hand goods — which didn’t come to fruition — and then Kuaishou, which at the time had fewer than 15 people and zero revenue.

Lu sat on the board until she left DCM in 2016, and the venture firm subsequently invested more in Kuaishou, but the high return is largely thanks to her early bet. DCM, which now holds a 7.6% stake in Kuaishou, is its first and largest international venture investor. China’s 5Y Capital, which was previously called Morningside Venture Capital, put in about $204m that was worth about $26bn as of Tuesday’s close.

You need to know “the top technology players, the best engineers in town,” Lu said on the importance of personal relationships. “Many of the entrepreneurs I backed, when they wanted to leave their company, I would say I will give you money.”

Lu set up Atypical Ventures in September 2019 after a brief spell at another venture capital firm. The name stems from her belief that entrepreneurs must be different from the norm, ready to go through tough times and delay gratification on the long road to building a big business. Its first fund raised $200m from US pension funds, endowments and billionaire families.

Atypical makes concentrated bets in a small number of start-ups — so far just five — and sees its role as supporting entrepreneurs. Lu said she has a personal rule of replying to messages from entrepreneurs within three hours, and often takes emergency calls from them in the early hours.

Company founders who’ve worked with her say she’s high in integrity, straight-talking and driven to succeed.

Li first met Lu in Beijing in 2010 after she cold-called him. He described the meeting as like a kidnapping. While he enjoyed her conversation, he declined to take her offer because the entrepreneur was about to close a fundraising round with another investor.

“She wouldn’t let us go,” Li recalled with a laugh. “Ruby told us we weren’t allowed to leave the room unless we signed a deal.”

By the next morning, Li had agreed. DCM invested $2m in the first fundraising round and later put in more money. It still holds its stake. The company’s valuation passed the $1bn mark in 2018.

Some of Lu’s relationships were decades in the making. In the 1990s, Victor Perlroth and his friend were looking for a roommate in Portola Valley, near where he was studying at Stanford University. He put an ad in the newspaper and Ruby replied.

Ten years later, the two started working together when Perlroth wanted to start a biotech firm but struggled to find backers. So he raised money from friends and family, including a personal investment from Lu. Kodiak Sciences, the company he founded, went public in 2018 and is worth more than $8bn. Lu probably made a 100-fold return on her investment, according to Perloth.

“She has an energy,” Perlroth said. “She’s very talkative, curious, friendly. What you see is what you get.”

Lu is unusual in her unwillingness to let start-ups go under. Most venture firms walk away from losers quickly so they can spend time on winners. “She does not accept even one failure,” said Sinovation’s Lee.

In one case, a startup was floundering and every other board member was ready to give up. Lu worked overtime to find a buyer, making investors a small return, according to people familiar with the matter.

Of the 20-plus start-ups she has invested in throughout her career, only one has been written off, far below the typical 30% to 40% failure rate. Eight had IPOs.

While Lu has had big successes, she also has regrets. They include missing out on ByteDance because she didn’t see enough potential to monetise the company’s first breakout hit — the news aggregator app Toutiao. She also turned down Lei Jun’s offer to invest in Xiaomi at a $1bn valuation. The company is now worth more than $88bn.

On being a rare female executive in venture capitalism and company boardrooms throughout her career, Lu said male colleagues often told her she’s “like one of us,” which was meant as a compliment. She says more must be done to get women into leadership positions, and government regulation should be used to speed up the process. Women occupied only 11% of board seats at Chinese companies in 2019, below the global average of 21%, according to a survey by Credit Suisse.

While Lu has come a long way since her chance encounter with the Pausch family more than three decades ago, Perlroth of Kodiak thinks there’s more to come as the Chinese technology industry develops. He said he sends all of his four children to a Chinese immersion school in Palo Alto, in part because of his relationship with Lu.

“It’s great to see the success she’s having,” he said. “But I think she is just getting started.”

Naspers market cap surges by over R110bn on Tencent rally