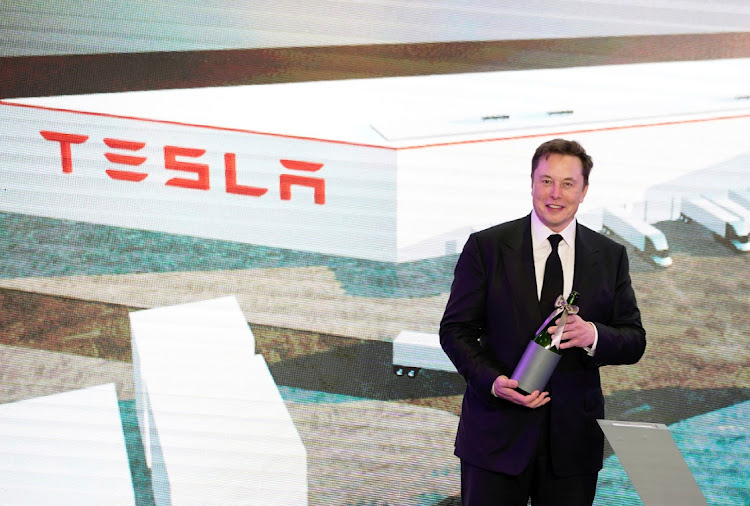 Tesla  reported a fifth consecutive quarter of profits on Wednesday and said it remains on track to deliver 500,000 cars in 2020.

The earnings streak could add momentum for Tesla’s inclusion in the S&P 500 Index and defies a downbeat trend among other carmakers struggling to overcome a pandemic-induced slump. The Palo Alto, California-based company reported third-quarter profit of 76c a share on an adjusted basis, beating analysts’ consensus estimates for 55c a share.

Tesla said it expects to meet a goal of delivering half a million cars worldwide this year, a target it wavered on after last quarter’s earnings and CEO Elon Musk’s hint in September it might not come to pass. The company needs more than 181,000 cars in the last three months of the year to hit that mark, which would be a 30% jump over the previous quarter.

“While achieving this goal has become more difficult, delivering half a million vehicles in 2020 remains our target,” the company said in a statement. Meeting that will largely depend on increased production at its Shanghai factory and higher output of its Model Y, it said.

In January, before the onset of the coronavirus pandemic, Tesla predicted it would “comfortably exceed” deliveries of 500,000 vehicles for the full year, a 36% increase from 2019. Still, the company’s likely double-digit growth stands out in a year when global auto industry deliveries are projected to be 14% below pre-Covid estimates and down 22% from 2019, according to LMC Automotive.

Tesla’s revenue rose to a better-than-expected $8.8bn, even as sales of regulatory credits to other automakers fell to $397m. That was down from $428m in the second quarter.

“Regulatory credits are a big part of the EPS beat,” said analyst Ben Kallo of Robert W Baird. “But that’s part of the game: Tesla’s competitors are paying them, and Tesla is reinvesting that into their factories in Berlin and Texas.”

The electric-car maker earns money by selling credits to manufacturers that need them to comply with carbon-emissions standards in California, Europe and elsewhere. Investors view this revenue as a double-edged sword because they want to know Tesla can be profitable from its core business: making and selling cars.

When S&P failed to add Tesla to its index last month, Bloomberg Intelligence analyst Michael Dean said it could be due to “question marks about the sustainability of regulatory emission-credit sales, which are now underpinning earnings”.

It is hiring public and government relations staff in China, where it garners about 25% of its income, unlike in the US where it has no media ...
Companies
9 months ago

Group of doctors, engineers and business figures use lockdown period to tackle shortage of breathing aids
Companies
9 months ago

WATCH: How the government can help carmakers

Once declaring ‘F*** GM’, Farley loves driving cars as much as he does selling them, which is good news for the iconic but ailing Ford
Companies
9 months ago
Next Article