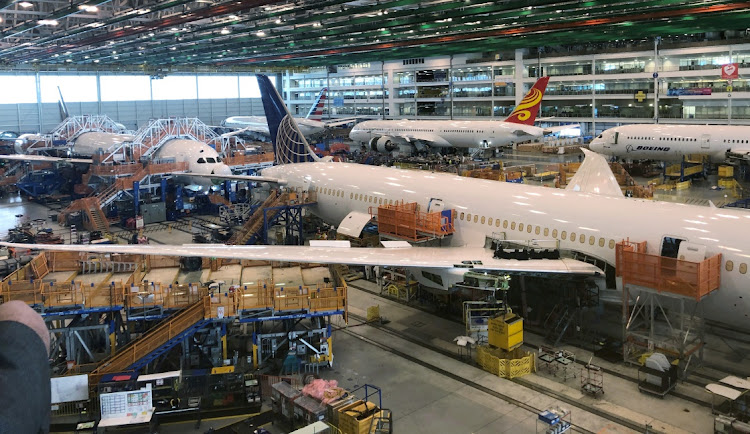 Boeing 787 Dreamliners are shown in final production in North Charleston, the US. Picture: REUTERS/ERIC JOHNSON

Seattle  —  Boeing sees a turbulent ride ahead for the jetliner market, with sales contracting sharply over the next decade before eventually rebounding in the 2030s as new models and technologies spur growth.

In its first market forecast since the coronavirus pandemic upended travel, Boeing predicted that aeroplane makers will deliver 18,350 commercial aircraft through to the end of the decade. That is 11% less than the company was expecting a year ago, before the virus sapped demand for travel and new jets.

The outlook underscores the deep slump afflicting global aviation, with years of torrid airline growth giving way to a fight for survival until a vaccine or treatment coaxes more consumers back to the skies.

Boeing released the report days after deciding to consolidate production of its marquee 787 Dreamliner in South Carolina, shutting down a final assembly line at Everett, Washington, to save money.

“We’re a long way from the bottom, which was mid-April, and it’s a long way back from here to full recovery,” Darren Hulst, Boeing’s vice-president of commercial marketing, told reporters in a briefing before the forecast was made public.

The Chicago-based aerospace titan typically releases a 20-year commercial outlook at the industry’s annual   trade expo, which was cancelled this year. In addition, Boeing decided this year to provide a 10-year snapshot to help illuminate the Covid-ravaged marketplace.

Airbus, Boeing’s European rival, does not have any plans to share its crystal ball.

“In the current, unprecedented context, it is too early for Airbus to issue a new forecast,” Stefan Schaffrath, a spokesperson for the Toulouse, France-based company, said in an e-mail. “Our analysis of the global market environment and the direct feedback we are getting from customers worldwide indicate that this crisis will go well beyond 2021, with air traffic not expected to recover to pre-Covid levels before 2023 at best, maybe even 2025.”

At the worst of the crisis, about two-thirds of the global jetliner fleet was parked along airport taxiways and in storage lots. While about 500 a week of those jets returned to the skies during June and July, the recovery has stalled.

The shock will reshape airlines and the trends that have governed jetliner sales for the past 15 years. Gone is the expansion mania of the past decade. Looking ahead, more sales — about 56% of this decade’s total — will be driven by airlines looking for greener, more fuel-efficient models to replace older jets, Hulst said.

In the market for single-aisle aeroplanes, the company expects demand to gravitate to the 160-180 seat range served by its 737 Max 8, which has been grounded since March 2019 after two crashes that killed 346 people. While the Max’s flying ban could be lifted in the coming months, the model faces a tough competitor in Airbus’s A320 family of jets.

For sales of twin-aisle aeroplanes, the focus will be on midsize aircraft, especially in the next five-to-10 years, Boeing said. Demand for flying behemoths such as the 777X — the company’s newest model — will be the last to recover.

Boeing predicted a total market value of $2.9-trillion for commercial jets over the next decade, without providing a comparable forecast from a year ago. Including defence, space and services, the market will be $8.5-trillion over the period, down $200bn from a year ago.

Growth will eventually pick up in the 2030s, Boeing said. Still, the company lowered its forecast of total deliveries over the next 20 years to 43,110 aircraft. That is about 2% less than Boeing predicted a year ago, with wide-body jetliners especially hard hit.

Deutsche Lufthansa says it will slim down its fleet by 150 jets, or the equivalent of 5,000 posts in addition to 22,000 that are already going
Companies
8 months ago

The cuts take the number of posts lost since the start of the Covid-19 crisis to 4,700, or about 45% of the workforce
Companies
9 months ago
Next Article