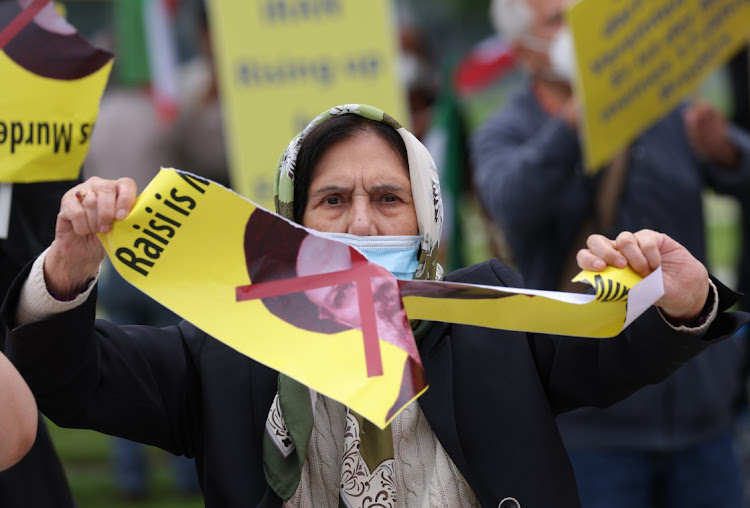 A woman rips up a portrait of Iranian president-elect Ebrahim Raisi at a protest in Berlin, Germany, August 3 2021. She is a supporter of the National Council of Resistance of Iran, which accuses Raisi of being responsible for the imprisonment and murder of Iranian activists. Picture: REUTERS

Dubai — Iran’s hardline incoming president Ebrahim Raisi said on Tuesday he would take steps to lift “tyrannical” sanctions imposed by the US, after winning the formal endorsement of the country’s supreme leader to take office later this week.

Raisi, who is under personal US sanctions over allegations of human rights abuses in his past as a judge, promised to improve the living conditions of Iranians, which have worsened since 2018 when Washington reimposed sanctions on Iran after abandoning a nuclear deal.

“We will seek to lift the tyrannical sanctions imposed by America,” Raisi, elected in June to replace pragmatist Hassan Rouhani in a vote in which other high profile candidates were barred from standing, said in a televised speech.

“But we will not tie the ... economy to the will of foreigners,” said Raisi, a protégé of Khamenei.

Iran and six powers have been in talks since April to revive the nuclear pact, under which Iran agreed to curb its nuclear programme to make it harder to obtain fissile material for a weapon in return for relief from sanctions.

Iran says it has never sought nuclear weapons and never would.

Iranian and Western officials have said significant gaps remain to reinstating the pact. A sixth round of indirect talks between Tehran and Washington in Vienna adjourned on June 20, and the parties have yet to announce when they will resume.

Raisi, who will be sworn in on Thursday and will then have one week to present his cabinet to parliament for a vote of confidence, is expected to adopt a hard line approach in the Vienna talks.

Ayatollah Ali Khamenei has the last word on all matters of state, but the change of president will remove the moderating influence on policymaking exercised by Rouhani since 2013.

Rouhani, the architect of the 2015 nuclear deal, has implicitly criticised Iran's top decisionmakers for “not allowing” his government to reinstate the pact during its term in office.

In his speech, Khamenei called on the new president to “empower lower-income people” by boosting the economy.

“I task the wise, indefatigable, experienced and popular... Raisi as president of Iran,” Khamenei said in his endorsement decree, which was read out by his chief of staff during the ceremony.

Appointed by Khamenei to run the judiciary in 2019, Raisi was placed under US sanctions a few months later for the role he allegedly played in the executions of thousands of political prisoners in the 1988. Iran has never acknowledged the killings.

Since his election, Raisi, 60, has for the first time publicly addressed the allegations, saying the US sanctions were imposed on him for doing his job as a judge. Dissidents fear his presidency could usher in more repression at home.