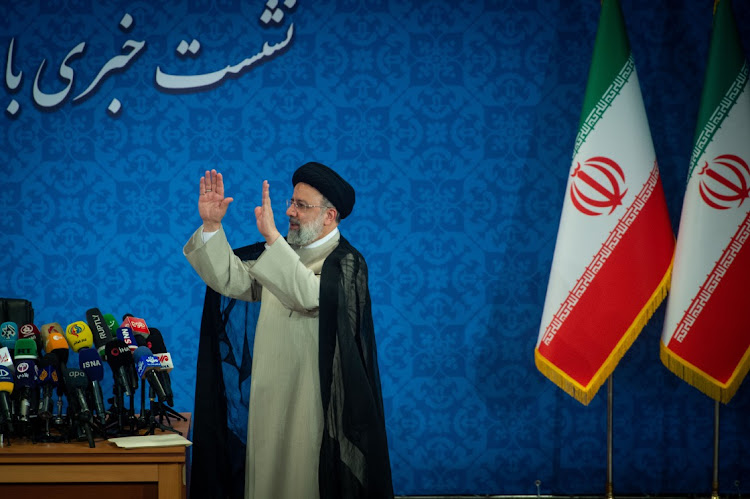 Ebrahim Raisi, Iran's president, waves to the media during his first news conference following his victory in the presidential election in Tehran, Iran, on Monday, June 21 2021. Picture: BLOOMBERG/ALI MOHAMMADI

Tehran — Iran’s hardline president-elect demanded an end to US sanctions on his country and Washington’s fully compliant return to the 2015 nuclear accord, suggesting in his first official news conference that he will maintain the administration’s efforts to preserve the deal.

Ebrahim Raisi’s election on Friday, however, could prove a complicating factor in negotiations, as the US will face demands from rights groups to maintain sanctions targeting him personally over his alleged involvement in mass killings and crackdowns.

“I seriously recommend that the US government swiftly return to its commitments and remove the entirety of the sanctions,” said Raisi, a cleric close to supreme leader Ayatollah Ali Khamenei. “The Iranian people don’t have a happy memory of the nuclear deal because it yielded the unexpected: the US breaking its promises and the Europeans not carrying out their obligations under the deal.”

He ruled out a meeting with US President Joe Biden, called himself a “defender of human rights”, and demanded that Washington guarantee it will not pull out of the nuclear accord again. Raisi also toed the Iranian administration’s line on opposing a widening of the deal to address issues of regional and global concern, including Iran’s ballistic missile programme and support for militant proxies.

Iran and world powers ended a sixth round of negotiations in Vienna on Sunday without a breakthrough, instead returning home for further consultations with their governments as key disagreements between the US and Iran remain over how to orchestrate the revival of the landmark accord that was abandoned by former president Donald Trump in 2018.

Iran said the next round of talks to revive the 2015 nuclear deal is likely to be the last, while European diplomats fretted that time to clinch an agreement is slipping away as hardliner Raisi prepares to take power. His election is expected to mark a more hostile approach to the West, and especially the US.

“We’ve reached a clear text on all the issues and what remains requires the decision of all parties,” Iran foreign ministry spokesperson Saeed Khatibzadeh told reporters. “It’s not unlikely that the next round of talks will be the last”.

European diplomats in Vienna sounded more concerned about how close negotiators are to a June 24 expiry of Iran’s nuclear inspections pact with the International Atomic Energy Agency and that moderate President Hassan Rouhani leaves office in August.

While the sides have managed to agree on a number of important elements, the most difficult issues still need to be resolved, senior European diplomats said, speaking on condition of anonymity to discuss confidential conversations.

Oil markets are closely following the talks for signs of when sanctions might be removed, triggering the return of Iranian crude to the market. They will also be keeping a close eye on the tone Raisi is likely to set in terms of his attitude towards foreign investment and the return of companies such as TotalEnergies, which abandoned a $5bn investment project after US sanctions were reimposed.

Decisions related to the nuclear deal and regional policy ultimately rest with Khamenei, who has so far backed talks and the revival of the deal, but on the condition it guarantees the US will not again abandon it in the future.

The Palestinian Authority has agreed to give Israel a reciprocal number of Pfizer-BioNTech doses from one of its own shipments due to arrive later in ...
World
1 year ago