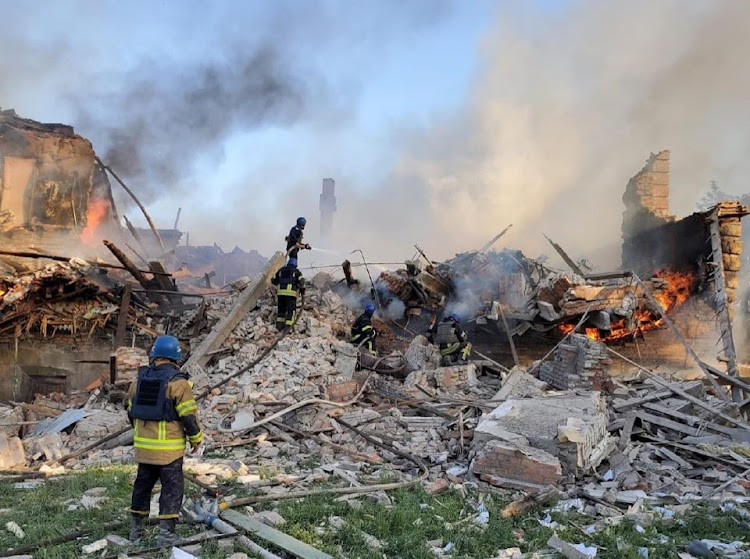 An emergency crew extinguishes a fire at a school building that was hit by Russian shelling in the village of Bilohorivka, Luhansk, Ukraine, May 8 2022. Picture: STATE EMERGENCY SERVICES/REUTERS

Zaporizhzhia — As many as 60 people are feared to have been killed in the Russian bombing of a village school in the eastern Ukrainian region of Luhansk, the regional governor said on Sunday.

Governor Serhiy Gaidai said Russian forces dropped a bomb on Saturday afternoon on the school in Bilohorivka where about 90 people were sheltering, causing a fire that engulfed the building.

“The fire was extinguished after nearly four hours. Then the rubble was cleared, and, unfortunately, the bodies of two people were found,” Gaidai wrote on the Telegram messaging app. “Thirty people were evacuated from the rubble, seven of whom were injured. Sixty people were likely to have died under the rubble of buildings.”

Reuters could not immediately verify the report.

Ukraine and its Western allies have accused Russian forces of targeting civilians in the war, which Moscow denies.

In the ruined southeastern port city of Mariupol, scores of civilians have been evacuated from a sprawling steel plant in a weeklong operation brokered by the UN and the International Committee of the Red Cross (ICRC).

Ukrainian President Volodymyr Zelensky said in an address late on Saturday that more than 300 civilians had been rescued from the Azovstal steelworks and authorities would now focus on trying to evacuate the wounded and medics. Other Ukrainian sources have cited different figures.

The Azovstal plant is a last holdout for Ukrainian forces in a city now largely controlled by Russia, and many civilians had taken refuge in its underground shelters. It has become a symbol of resistance to the Russian effort to capture swathes of eastern and southern Ukraine.

Russian-backed separatists said on Sunday a total of 182 civilians evacuated from the plant had arrived at a temporary accommodation point in Bezimenne, in the area they control. Those who wished to go to areas controlled by Ukraine were handed over to UN and ICRC representatives, they said.

In the Ukrainian-controlled city of Zaporizhzhia, about 230km northwest of Mariupol, dozens of people who had fled the port city and nearby occupied areas on their own or with the help of volunteers waited to be registered in a car park set up to welcome evacuees.

“There’s lots of people still in Mariupol who want to leave but can’t,” said history teacher Viktoria Andreyeva, who said she had only just reached Zaporizhzhia after leaving her bombed home in Mariupol with her family in mid-April.

“The air feels different here, free,” she said in a tent where volunteers offered food, basic supplies and toys to the new arrivals, many of whom were travelling with small children.

In an emotional address on Sunday for Victory Day, when Europe commemorates the formal surrender of Germany to the Allies in World War 2, Zelensky said evil had returned to Ukraine with the Russian invasion, but his country would prevail.

Russian President Vladimir Putin calls the invasion he launched on February 24 a “special military operation” to disarm Ukraine and rid it of anti-Russian nationalism fomented by the West. Ukraine and its allies say Russia launched an unprovoked war.

Mariupol is key to Moscow’s efforts to link the Crimean Peninsula, seized by Russia in 2014, and parts of the eastern regions of Luhansk and Donetsk that have been controlled by Russia-backed separatists since that same year.

Putin sent Victory Day messages to separatist leaders in Luhansk and Donetsk, saying Russia is fighting shoulder to shoulder with them and likening their joint efforts to the war against Nazi Germany. “Victory will be ours,” Putin said, according to a Kremlin press release on Sunday.

US President Joe Biden and other Group of Seven (G7) leaders were to hold a video call with Zelensky on Sunday in a show of unity ahead of Russia's Victory Day celebrations on Monday.

Putin will preside on Monday over a parade in Moscow’s Red Square of troops, tanks, rockets and intercontinental ballistic missiles, making a speech that could offer clues on the future of the war. Russia’s efforts have been stymied by logistical and equipment problems and high casualties in the face of fierce resistance.

US CIA director William Burns said on Saturday that Putin is convinced “doubling down” on the conflict will improve the outcome for Russia. “He’s in a frame of mind in which he doesn’t believe he can afford to lose,” Burns told a Financial Times event in Washington on Saturday.

Russia’s defence ministry said on Sunday its forces destroyed a Ukrainian navy ship near Odesa with a missile strike overnight, and destroyed four Ukrainian warplanes, four helicopters and an assault boat in the past 24 hours.

The Luhansk governor said Ukrainian forces have retreated from the city of Popasna, which has been the focus of intense fighting. “Everything was destroyed there. Our troops retreated to more fortified positions,” he told Ukrainian television.

Ramzan Kadyrov, the head of Russia’s republic of Chechnya, said earlier his soldiers have taken control of most of Popasna.

Reuters could not independently verify the claims made by any of the parties to the fighting.