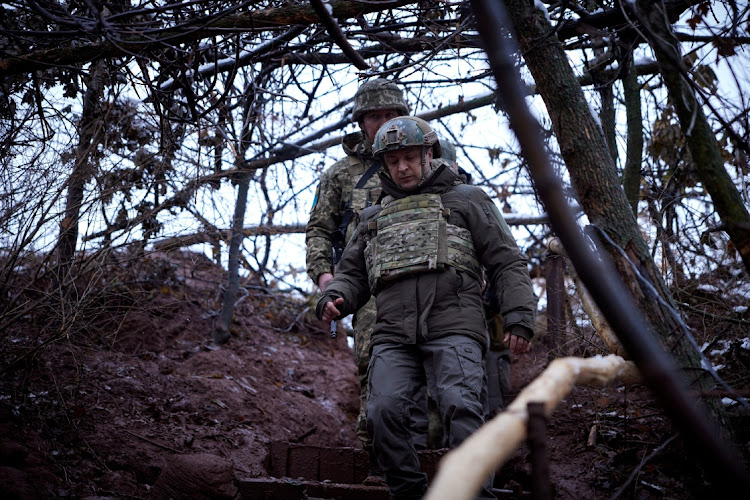 Ukraine's President Volodymyr Zelenskiy meets service members near the line of separation from Russian-backed rebels in the Donetsk region in December, before the Russian invasion. Picture: UKRAINIAN PRESIDENTIAL SERVICE/REUTERS

London — One of the architects of the Moscow-backed separatist rebellion in eastern Ukraine eight years ago says Russia’s invasion of Ukraine is a mistake, in comments that show the Kremlin cannot count on support from all pro-Russian opponents of Kyiv.

Alexei Alexandrov was one of the leaders of a movement in 2014 to reject Kyiv’s rule and create an autonomous pro-Moscow territory in Ukraine’s eastern Donbas region, triggering a war against Ukrainian government forces.

Russian President Vladimir Putin has said Russia attacked Ukraine in February in part to protect the separatist territory from Kyiv, though Western states say that is a pretext for an unprovoked land grab.

In an interview with Reuters last Friday, Alexandrov said: “All this could have been resolved earlier, mainly through diplomatic means and perhaps an insignificant use of force. But that was not done, and that is a mistake on all sides.”

He said that because Moscow failed to negotiate a settlement with Kyiv guaranteeing autonomy for Donbas and rights for its residents, by the start of this year armed conflict became unavoidable.

Alexandrov said Moscow has, over many years, failed to grasp how to deal with Ukraine, whose rulers he said are set on crushing the identity of the Russian-speaking community in eastern Ukraine. Kyiv and its allies deny the accusation.

“Moscow’s reaction was always late, and never got to grips with the situation,” he said. “That was a mistake, and we are reaping the consequences now in blood and multiple victims on both sides.”

Contacted by Reuters, the Kremlin did not provide a comment about the remarks by Alexandrov, who was chief of staff to the head of the self-proclaimed republic’s parliament, Andrei Purgin, until both men were pushed out of their roles in 2015.

In the interview, Alexandrov said once the active phase of the conflict in Ukraine is over, the long-term outlook for Donbas is unclear. He said he doubts Russia has the resources to bring the whole of Ukraine under its control.

If Russia kept its presence in eastern Ukraine, there would be a high likelihood of a renewed armed conflict with the Ukrainian state, Alexandrov said. “This is not how it should have ended,” he said. “It’s not worth all the victims.”

Alexandrov was among a group of people who created the self-proclaimed Donetsk People’s Republic in 2014, defying Kyiv’s rule, after pro-Moscow Ukrainian president Viktor Yanukovich was ousted by popular protests and replaced with Western-leaning leaders.

Since 2015, when his boss, Purgin, was dismissed and briefly detained for reasons that were never spelt out, Alexandrov has lived as a private citizen inside Russian-controlled territory and has not held any official roles or elected office.

Ukraine started auctioning off a collection of non-fungible tokens (NFTs) this week in an expansion of a cryptocurrency fundraising push that Kyiv ...
Business
4 months ago

The paper, which already removed material from its website on Russia’s military action in Ukraine to comply with a new media law, received a second ...
World
4 months ago

The prime minister continues to put his foot in his mouth, and get away with it
Opinion
4 months ago
Next Article