European Central Bank leaves key rates unchanged, as expected, and upgrades its growth forecast for 2021 to 5% from 4.6% 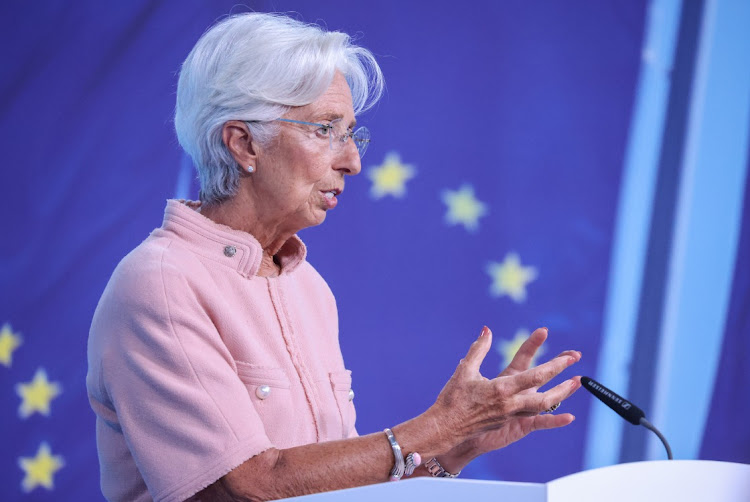 Frankfurt  — The European Central Bank (ECB) will trim emergency bond purchases over the coming quarter, it said on Thursday, taking a first small step towards unwinding the emergency aid that has propped up the eurozone economy during the pandemic.

After the ECB pulled out all the stops in 2020 as Covid-19 ravaged the economy, high vaccination rates across Europe are now bolstering recovery prospects and policymakers were under pressure to acknowledge that the worst is over.

But with rising US infection rates making the Federal Reserve hesitant to wind down its stimulus, the ECB trod cautiously: it flagged no other moves, notably how it ultimately plans to dismantle the €1.85-trillion Pandemic Emergency Purchase Programme (PEPP) which has kept borrowing costs low.

“What we have done today ... unanimously, is to calibrate the pace of our purchases in order to deliver on our goal of favourable financing conditions. We have not discussed what comes next,” she said.

Earlier, the ECB released a statement saying its Governing Council agreed favourable financing conditions could be maintained with a “moderately lower pace” of asset purchases.

In the past two quarters, the bank has purchased around €80bn worth of debt each month. It provided no numerical guidance for the three months ahead, but analysts had predicted before the meeting that purchases would fall to between €60bn and €70bn in those months.

Highlighting policymakers’ caution, the bank also maintained a long-standing pledge to ramp stimulus back up if markets turn and financing conditions require it.

While Lagarde stressed that future recovery prospects still depend on the continued success of Europe's vaccination programme and also the pace of infections across the world, the economy of the 19-country bloc is perking up.

Lagarde said policymakers continued to believe that wage pressures were modest and that supply bottlenecks hitting materials and equipment would start to ease.

With Thursday’s decision, the ECB’s key rate remains unchanged at minus 0.5%, PEPP remains on track to end next March and purchases under the older Asset Purchase Programme (APP) remain at €20bn a month.

But by skirting the big issue around the exact end of emergency support, the ECB has effectively left that contentious decision for December’s meeting.

The difficulty is that the bank must signal the end of PEPP, its biggest asset-purchase scheme, as the coronavirus crisis ends, while promising to maintain support via other tools because inflation is still too low.

That will require the ECB to shift its focus to the more rigid, longer-established APP, the bank's primary stimulus tool before the pandemic.

But to make the APP fit for purpose, the ECB must increase purchase volumes and make its rules more flexible — which conservative members of the Governing Council could resist, fearing that the ECB is already acting beyond its mandate.