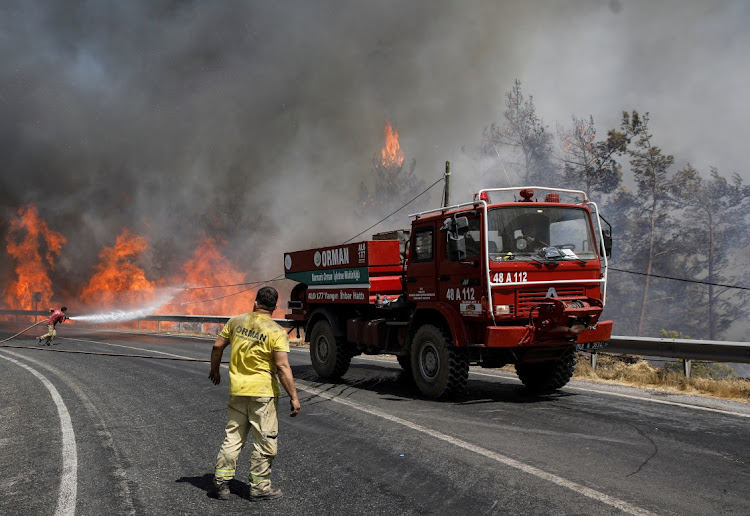 Marmaris — Firefighters using aeroplanes  and helicopters, and locals with buckets of water, battled wildfires raging for a sixth day near southern coastal resorts in drought-hit Turkey on Monday and the government faced fresh criticism of its handling the disaster.

The death toll rose to eight on Sunday after two more people died in the southern town of Manavgat, health minister Fahrettin Koca said, adding that 10 others were receiving treatment in hospital in the area.

In neighbouring Greece, firefighters were attempting to contain a blaze that has destroyed houses and hospitalised more than a dozen people.

Experts have warned that climate change is increasing the frequency and intensity of wildfires through drought.

While 16 aircraft and 51 helicopters tackled blazes across a swathe of southwest Turkey, villagers carrying water containers up a hill to fight a fire near Marmaris said the government was not doing enough to help them.

“We are here as the entire village, from the locals to others. We didn't run or anything, so the government must see this and also not run away. It must send some of its planes here,” a woman called Gulhan said.

Engin Ozkoc, a senior figure in the main opposition CHP, called on Pakdemirli to resign for failing to adequately prepare.

“You don't deserve that ministry. You didn’t foresee this and buy firefighting planes,” he said, criticising the amount of aerial resources available.

The EU said it had helped mobilise three firefighting aeroplanes on Sunday. One   from Croatia and two from Spain joined teams from Russia, Iran, Ukraine and Azerbaijan.

“Our Turkey is strong. Our state is standing tall,” Altun said on Twitter, describing most information about the fires on social media as “fake news”. “All our losses will be compensated for.”

Since Wednesday, thousands of people have been evacuated from their homes and some tourists have left their hotels, though Tourism Minister Mehmet Ersoy said holidaymakers had returned within hours.

The wildfires are another blow to Turkey's tourism industry following the Covid-19 pandemic.

Bulent Bulbuloglu, head of the South Aegean Hoteliers Association, said 10% of reservations had been cancelled in Bodrum and Marmaris. Others had cut their visits short.

Scientists warn that countries will need to realise that extreme events are here to stay, even if the world can rapidly reduce emissions
World
1 month ago

Extreme weather damages white wheat, which is coveted by Asian buyers, and forces workers to harvest cherries at night
World
2 months ago
Next Article