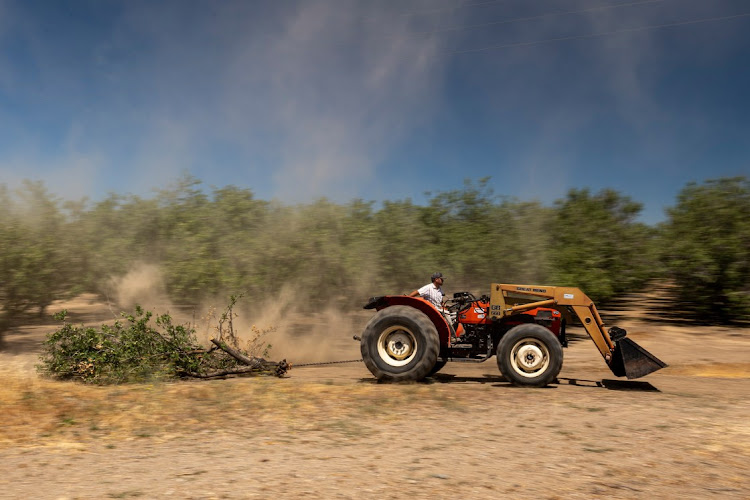 A farmer pulls a wind-felled almond tree with a tractor on an almond farm in Gustine, California, US. File photo: BLOOMBERG/DAVID PAUL MORRIS

Christine Gemperle is about to do what almond farmers fear the most: rip her trees out early.

Water is so scarce on her orchard in California’s Central Valley that she has been forced to let a third of her land go dry. In the irrigated areas, the lush, supple trees are dewy in the early morning, providing some relief from the extreme heat. Walking over to the dry side, you can actually feel the temperature start to go up as you are surrounded by the brittle, lifeless branches that look as if they could crumble into dust.

“Farming’s very risky,” said Gemperle, who will undertake the arduous process of pulling out all her trees on the orchard this fall, replacing them with younger ones that do not need as much moisture. It is a tough decision. Almond trees are typically a 25-year investment, and if it were not for the drought, these trees could have made it through at least another growing season, if not two. Now, they will be ground up into mulch.

“I don’t think a lot of people understand just how risky this business is, and it’s a risk that’s associated with something you can’t control at all: the weather,” she said.

It is a stark reminder of the devastating toll that the drought gripping the West will take on US agriculture, bringing with it the risk of food inflation.

Dairy farms are sending cows to slaughter as they run short of feed and water. Fields are bare because it is too costly to irrigate the rows of cauliflower, strawberries and lettuce that usually flourish in abundance. Field workers are put into life-threatening conditions as the high temperatures increase the risk of heat stroke and dehydration.

The famed farming valleys of California were once romanticised as an Eden for the Joad family escaping the Oklahoma dust bowl in John Steinbeck’s The Grapes of Wrath. The state’s more than 69,000 farms and ranches supply over a third of US vegetables and two-thirds of its fruit. The annual almond harvest accounts for about 80% of global production. But after years of what seems like permanent dryness, some growers are starting to wonder if Steinbeck’s story will start playing out in reverse, with unstoppable drought posing an existential threat to the future of agriculture in the state.

“Are we going to be able to farm here?,” asks Sara Tashker, who’s worked at Green Gulch Farm just outside San Francisco for almost 20 years. This is the first time she has seen the reservoirs the farm depends on to water its lettuce, broccoli, cauliflower and cabbage, not fill with winter rain.

With so little water, there was no way around planting less, so total acreage got cut about 25% from last year. And the crops are getting put into the ground closer together, in about half the typical amount of space. It is an attempt to make the root structure denser and keep moisture in the soil. The limited spacing means fieldworkers are having to cultivate by hand, instead of using tractors. But in the midst of an early heat wave, Tashker cannot help but wonder if the new methods will be enough.

Of course, this is not just a California problem. Climate change is here and it is wreaking havoc on food production across the world. This year in Brazil, the world’s biggest exporter of coffee, sugar and orange juice, the rainy season came and went with little rain. Water reserves are running so low that farmers are worried they will run out of supplies that are needed to keep crops alive over the next several months, the typical dry period. In recent years, drought has plagued wheat growers in Europe and livestock producers in Australia, while torrential downpours flooded rice fields and stands of palm oil trees in Vietnam, Malaysia and Indonesia.

All told, about 21% of growth for agricultural output has been lost since the 1960s because of climate change, according to research led by Cornell University and published in the journal Nature Climate Change.

Meanwhile, this year’s production problems come at a time when the world is already saddled with the highest global grocery costs in about a decade and hunger is on the rise. Extreme weather is combining with the economic shocks of Covid-19 and political conflicts to leave 34-million people on the brink of famine, the UN’s World Food Programme has warned.

For California, “over time, unless something changes in regard to weather patterns, ultimately it’s going to be fewer, probably larger farming operations controlling most of the water,” said Curt Covington, senior director of institutional credit AgAmerica Lending, one of the largest nonbank agricultural lenders in the US. “The price of those commodities would typically increase,” he said.

California gets the vast majority of its precipitation during the winter months, when the state’s mountains get blanketed with snow and rain fills the reservoirs that farms and hydropower plants depend on. This past winter, the moisture never came. From May 2020 to April 2021, the state posted its driest-ever 12-month period.

Meteorologists have a saying: drought begets drought. When land is dry, the sun’s energy is focused on heating the air instead of evaporating water. That raises temperatures, which leads to more dryness, which allows drought to spread even further. That is why the brutally parched conditions of this year could spell additional trouble down the road, especially if next winter is not a wet one.

“It’s been a couple of years of pretty solid drying, and so the whole region out there, from a fruit and vegetable perspective, is at risk,” said Drew Lerner, president of World Weather in Kansas. “A lot of pressure is going to be put on for better rainfall during the winter next year, in order to prevent a larger crisis.”

California’s drought could have impacts on both the production and price of crops, according to analysis by Gro Intelligence. Tree crops, such as almonds, avocados and citrus, are particularly vulnerable to dry conditions. It is still too early to say with any certainty how much prices could increase, but avocados might be providing an early warning sign as they are already up about 10% from last year. That could mean that prices for nuts and even products such as almond milk could increase down the road if harvests continue to be constrained.

Meanwhile, almond farmer Gemperle is ready to invest $250,000 on a “Cadillac” water system that will more efficiently irrigate about 92 acres of her orchard. Between that and the younger trees getting planted, she sees an opportunity for water savings on her farm, at least for a few seasons.

Still, it is unclear when she will recoup the cost of the new water system, especially if almond prices stay low. A huge crop last year has kept the market well supplied.

Farming “has never been riskier,” Gemperle said. “But farmers are tough, they are survivors and they don’t like to give up. They can’t, farming defines them, it’s in their blood.”

Direct air capture of carbon dioxide and forcing it underground is just one technology in the fight against climate change, but is it viable?
World
1 year ago

Power cuts planned this week due to threat of high winds could affect more than 800,000 people
World
1 year ago

California may cut power to 225,000 on Christmas Eve due to wildfire threat

Los Angeles has received no rain in December, keeping the danger high that strong winds could cause live wires to fall and spark fires
World
1 year ago
Next Article