The frequency of extremely hot summers is increasing because of the influence of humans on the planet’s climate, a senior Met Office scientist says 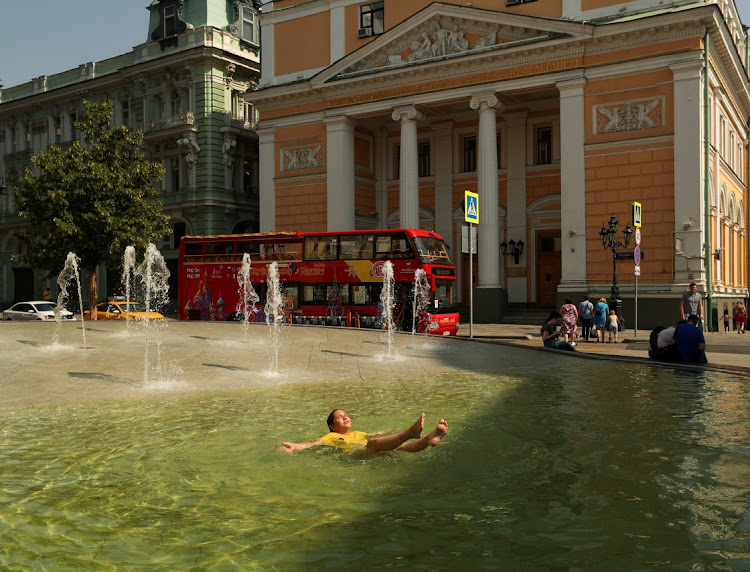 A girl enjoys a bath in a water fountain on a hot day in Moscow, Russia June 23, 2021. REUTERS/EVGENIA NOVOZHENINA

Residents in Eastern Europe and parts of Siberia unaccustomed to high temperatures are struggling to cope with heatwaves sweeping across the region.

Kyiv, Belgrade and Budapest experienced record-high monthly temperatures in June, leading to a spate of drownings in rivers and swimming pools in Serbia as crowds rushed to cool off. In Ukraine, residents ignored authorities’ warnings of an unusually high concentration of bacteria at some beaches as they sought relief in the water.

Thermometers in Moscow reached 34.8 °C on Wednesday, the highest reading for June since 1901. Temperatures in eastern Siberia rose above 30°C. While southern European countries have become more accustomed to hot and dry weather in past years as climate change advances, such conditions are not as common in the east, and caught governments off guard.

“The frequency of this kind of extremely hot summers is increasing because of the influence of humans in the planet’s climate,” said Nikos Christidis, a senior scientist at the Met Office in the UK. “How much and how severe the impacts are going to be depends on the levels of adaptation in each particular country.”

Extreme heat is likely to continue through much of the coming week, with temperatures in Bulgaria forecast to rise to 39°C in some cities, according to the country’s national weather service. In Romania, seven counties including the capital Bucharest are under code red emergency status, with temperatures reaching 41°C in the west of the country.

“It is likely that some all-time temperature records will be set during this heatwave,” said Chris Almond, the Met Office’s global forecaster. In western Russia “thunderstorms will help bring temperatures closer to normal during next week, but the east of the affected region is likely to remain hot or very hot.”

The sort of extreme heatwaves that were expected to occur in southern Europe twice a century in the early 2000s are now likely to happen twice a decade, according to Christidis. The rest of the continent will get hotter and drier too. Further to the east, the region north of Kazakhstan is extremely cold for this time of the year, according to Carlo Buontempo, director at the Copernicus Climate Change Service.

This pattern of hot and cold extremes is associated with variations in the jet stream, a current of strong winds that blows in the upper levels of the atmosphere from west to east. The jet stream in the northern hemisphere is also influencing weather in the western US, which is currently undergoing a heatwave and extreme drought.

Scientists posit that conditions in eastern Siberia are related both to the jet stream and climate change. On June 20 last year, a weather station in the Russian town of Verkhoyansk registered a reading of 38°C, the highest daily maximum temperature recorded north of the Arctic Circle. On June 20 this year, temperatures at the same station reached 33.1°C, below last year’s record, but still much higher than average.

“We know that the Arctic is warming much faster than the rest of the world,” Buontempo said. “One reason is the ice albedo feedback — by removing ice that’s white and reflects a lot of sunshine you expose barren soil or sea that absorb more heat.”

The prolonged Siberian heatwave of 2020 would have been almost impossible without climate change, according to a study published in May in Springer. Human-induced climate change has dramatically increased the probability of the frequency and magnitude of heatwaves in the larger Siberian region, which spans across the north of the Asian continent, the scientists concluded.

In another warning sign, Copernicus satellites detected an unusually high land-surface temperature of 48°C above Verkhoyansk this week. That reading corresponds to how hot the surface of the planet is, compared with the metric tracked by meteorological stations on land.

The high reading can be explained by another crisis that’s being exacerbated by climate change, according to Buontempo. The intense fires that spread across the region last year destroyed large areas of tree cover that had helped cool the atmosphere, leaving barren soil exposed. This year, the start of the fire season has been the most active since at least 2003.

A survey of more than 3,000 English adults on Monday by YouGov found that 71% supported delaying the easing of lockdown measures by four weeks
Opinion
3 months ago