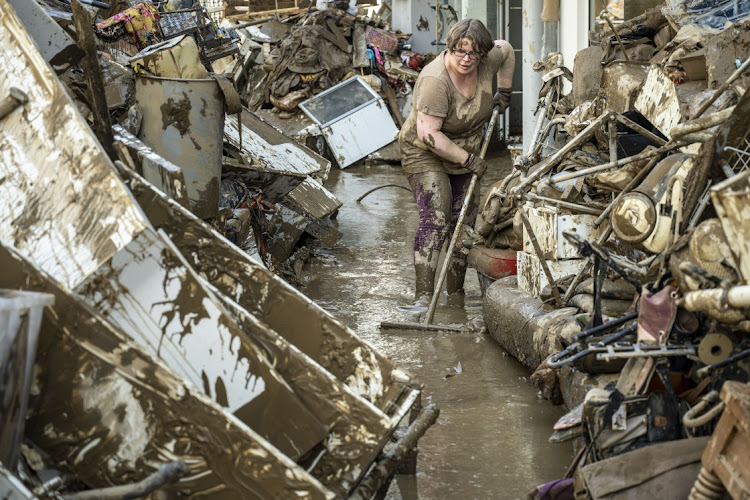 Images of battered cars piled up in swollen gullies and floodwater surging through sleepy half-timbered villages have shocked German voters. With the authorities looking ill-prepared and climate concerns back on top of the public agenda, the Green party has gained an opening.

Conservative front-runner Armin Laschet hampered his bid by jesting in the midst of the catastrophe, which has galvanised the German government into action. Merkel’s cabinet will meet on Wednesday to approve emergency aid for the worst-hit regions.

Merkel on Sunday toured the damage from one of Germany’s worst natural disasters in decades. The floods, which began last week, mainly hit Laschet’s home state of North Rhine-Westphalia and neighbouring Rhineland-Palatinate. Torrential rains cut off villages as rivers burst their banks. The death toll has approached 200 and scores are still missing.

The situation in the flooded areas in western Germany is now largely stable. Critical dams like the Steinbachtalsperre near Cologne have held, and rescue workers from across the country joined locals to clear roads. But heavy rainfall and flooding in southern Germany underscored how quickly the situation can change.

“It is terrifying,” Merkel, who leaves office after the Sept. 26 national vote, said Sunday as she surveyed the damage in Rhineland-Palatinate. “There are barely words in the German language to describe the devastation that’s been wrought here.”

The gaffe was pilloried on social media and opened a line of attack for the Greens and Social Democrats accusing him of a lack of empathy. Laschet apologised on Twitter and appeared Sunday evening in a television address, looking the part of a premier from a region hit hard by the floods.

The 60-year-old, who shouldered his way to the party leadership and the chancellery candidacy this year, said the damage is “beyond imagination” and addressed critics who’ve taken a dim view of his commitment on climate, saying global warming must be addressed “more quickly and more forcefully.”

“We will be dealing with the wounds of the past few days for a long time,” Laschet said. “Reconstruction will take months, even years.”

With flood warnings sounding in Germany’s southern and eastern states of Bavaria and Saxony, the spectre of more-frequent weather disasters has resounded for German voters.

“We clearly see a link to climate change,” Ernst Rauch, chief climate scientist for German reinsurer Munich Re, said in a Bloomberg TV interview. “The frequency and intensity of these events is going to increase.”

That’s timely for the Greens. Rooted in anti-nuclear activism of the 1980s, the party has already displaced the Social Democrats as the leading centre-left force. It surged past Merkel’s CDU in the spring to top voter polls for the first time after nominating 40-year-old Annalena Baerbock to run for the chancellery.

But Baerbock’s star dimmed after accusations she embellished her credentials and cribbed passages for a book she wrote. That put Laschet, the premier of Germany’s most-populous state, ahead in the polls to succeed Merkel.

The CDU’s lead over the Greens narrowed to 10 percentage points, with Laschet’s bloc at 28% support, according to a poll published Sunday by Bild am Sonntag. The Social Democrats were close behind the Greens at 17%.

Now, the campaign may end up turning on the biggest floods since the Middle Ages for parts of Germany.

While all main parties have honed ambitions to achieve a carbon-neutral economy by 2045 or earlier, the Greens are proposing the most ambitious action, aiming for emissions-free cars and phasing out coal-fired plants by the end of the decade, making short-haul flights redundant and jacking up carbon pricing.

There’s precedent for a Green surge: a decade ago, the party soared in the polls after the Fukushima nuclear disaster in Japan and before the coronavirus crisis it was on par with the conservatives amid a historic drought. A repeat could put Laschet’s bloc on the back foot in an election that’s 10 weeks away.

For her part, Baerbock cut short a vacation last week to survey flood damage. She attacked the federal government for being too slow to act and ill prepared.

“Climate protection is now,” she said on Twitter. “The events make it abundantly clear that we must better protect our residential areas and infrastructure from extreme weather.”

Flood politics has a history in Germany. Gerhard Schroeder strapped on rubber boots and waded into ravaged regions along the Elbe river in 2002, a move widely viewed as helping him secure re-election as chancellor that year.

Merkel has avoided the election-season fray. She was on a visit to Washington for talks with President Joe Biden as the scale of the disaster became clear. After a breakfast with Vice President Kamala Harris, she made a statement to the German press on the floods.

The chancellor made it to the affected areas for the first time Sunday, visiting Schuld, a devastated town in Rhineland-Palatinate. Merkel said she wanted to gather a “real picture of what I must say is a surreal and haunting situation.”