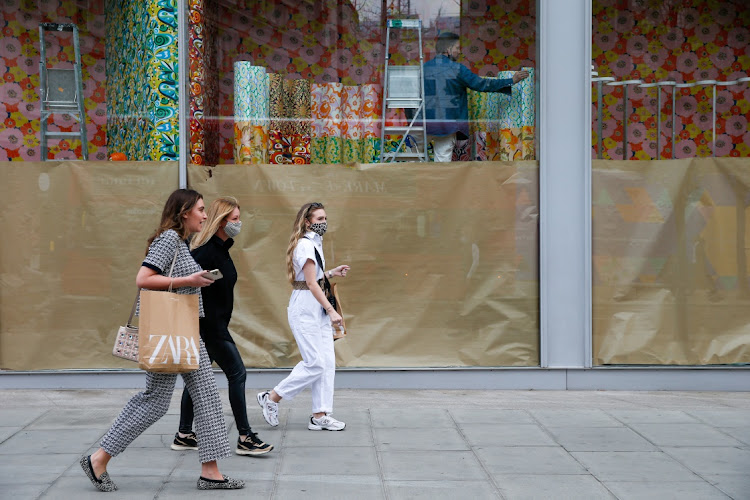 Shoppers pass a Zara clothing store as a worker redresses the window display on Oxford Street in central London, the UK, on April 20 2021. Picture: BLOOMBERG/HOLLIE ADAMS

London — A deluge of new orders swept through British businesses in April as the country lifted some of its Covid-19 restrictions, according to a survey on Friday that pointed to a rapid rebound for the pandemic-hit UK economy.

The preliminary “flash” reading of the UK composite purchasing managers' index (PMI) rose to 60.0 in April from 56.4 in March, its highest reading since November 2013. A Reuters poll of economists had pointed to a smaller rise to 58.2.

The survey added to signs that the world’s fifth-biggest economy, which shrank by nearly 10% in 2020, is shaping up for a rapid recovery helped by the fast rollout of Covid-19 vaccinations.

Official data published earlier on Friday showed retail sales jumped by much more than expected in March even with many shops still closed last month.

Clothing retailers able to sell online benefited especially as consumers got ready to venture out after being locked down for much of the past year.

Retailers also reported a rise in purchases of mobility equipment as older people left their homes after their vaccinations and there was a jump in sales at garden centres, reflecting the boom in gardening over the past year.

Nonessential retailers in England reopened on April 12 along with pubs and restaurants operating outdoors, and from May 17 more restrictions are due to be lifted to allow indoor hospitality, performances and sporting events.

Both services and manufacturing companies increased staffing in April in preparation, the PMI survey showed.

“We now seem to be seeing the first evidence of the release of the pent-up demand that was built up over the many months of lockdown as restraints begin to be lifted,” said Rhys Herbert, senior economist at Lloyds Bank.

Sterling was little changed by the report.

The evidence of momentum in Britain came after data unexpectedly showed the eurozone economy also picked up pace April, despite slower progress in vaccinating the bloc's population.

Another survey published on Friday showed British consumer confidence in April rose to its highest since the start of the pandemic.

The PMI for Britain’s services sector rose to 60.1 in April from 56.3 in March, the highest reading since August 2014 and driven by consumer-facing businesses.

The PMI for the manufacturing sector, which accounts for around 10% of British economic output, rose to its highest since 1994 at 60.7, up from 58.9 in March.

As in previous months, the reading was flattered by the way the survey interprets supply chain delays caused by the pandemic and to a lesser extent Brexit.

Both manufacturers and services companies reported rapid increases in cost pressures — something the Bank of England will be keeping an eye on.

“These prices will inevitably feed through to higher inflation as we head into the summer, though there's much uncertainty as to how long the inflationary impact will last,” IHS Markit chief business economist Chris Williamson said.

Britain's full departure from the EU in December  means it no longer has to comply with the bloc’s financial rules, freeing it to tailor regulation ...
World
1 year ago

But the UK stands by its report, saying the conclusions made by the human rights experts misrepresents the review’s findings
World
1 year ago
Next Article