An agreement would ease the isolation of the Islamist militants and hand Abu Dhabi a victory in its diplomatic tussle with Qatar for influence in Afghanistan, sources say 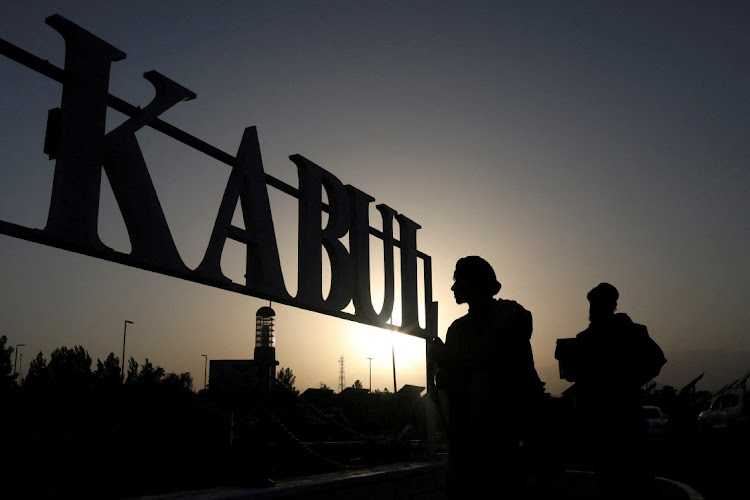 Taliban soldiers stand in front of a sign at the international airport in Kabul, Afghanistan, September 9 2021. Picture: REUTERS/WANA NEWS AGENCY

The Taliban and the United Arab Emirates are set to announce a deal within weeks for the Gulf nation to run Kabul airport and several others in Afghanistan, according to sources familiar with the negotiations.

An agreement would help the Islamist militants ease their isolation of the impoverished country beset by drought, widespread hunger and economic crisis.

The deal would also hand Abu Dhabi a victory in its diplomatic tussle with Qatar for influence with Afghanistan’s administration.

The Taliban, which remains an international pariah without formal recognition, has courted regional powers, including Qatar and Turkey, to operate Kabul airport, landlocked Afghanistan's main air link, and others.

But after months of talks, and at one point raising the possibility of a joint UAE-Turkey-Qatar deal, the Taliban is set to hand all operations to the UAE, which had previously run Afghan airports, the sources said.

Under the deal with the UAE, Afghans will be employed at the airports, including in security roles, a condition that was crucial to the Taliban, which staunchly oppose the presence of foreign forces, the sources said.

An Emirati state-linked contractor would also provide security services, while talks continue on the management of Afghanistan’s airspace, they said.

Emirati state-linked GAAC, which was involved in running security and ground handling services at Afghan airports before the Taliban takeover, was awarded the ground-handling contract in May soon after Taliban officials visited Abu Dhabi.

Qatar and Turkey’s joint negotiations with the Taliban broke down around the same time, sources said.

Emirati officials had no immediate comment when contacted. GAAC did not respond to a request for comment.

A Taliban transport ministry spokesperson confirmed an aviation security contract had already been signed with the UAE, but said the air-traffic contract wasn’t finalised or confirmed yet.

The sources said UAE airlines, which have not flown to Afghanistan since the Taliban takeover last year, were expected to resume flights to Kabul and possibly other Afghan airports after the deal is finalised.

In the months before the ground-services contract award, the Taliban repeatedly made unexplained changes to its team negotiating with Qatar and Turkey, the sources said.

They also sought to alter the agreed terms by increasing airport fees and taxes and weaken Qatar and Turkey’s control over revenue collection, they added.

A Qatari official had no immediate comment when contacted. A Turkish official, who did not want to be identified, confirmed that talks with the Taliban had stopped “some time ago”.

There is little direct commercial benefit in the airport operations that pose significant security challenges, but Kabul airport would provide a key source of intelligence on movements in and out of the country, Western officials say.

The UAE’s negotiations are part of efforts by Abu Dhabi to expand long-standing ties with Afghanistan’s rulers that has included government aid and diplomatic efforts in the months since the militants took power.

Western officials say Abu Dhabi views Afghanistan, which shares a large land border with the UAE’s Gulf neighbour Iran, as part of its wider backyard and so believes it has legitimate interests in the country’s political and economic stability.

Western officials also say the UAE is keen to counter the influence in Afghanistan of Qatar, a Gulf state lauded by Western nations for serving as gateway to the Taliban but a rival of Abu Dhabi’s in a contest for regional influence.

Western officials are concerned that the rivalry is now playing out in Afghanistan. The UAE, along with Saudi Arabia, Egypt and Bahrain, cut ties with Qatar from 2017 until 2021 in a long-running dispute between the two rich Gulf states that was largely resolved last year.

Qatar has hosted the Taliban’s political office in Doha, long one of few places to meet the militants and where the US negotiated with the militants to withdraw from Afghanistan.

Qatar’s relationship with the Taliban now appears to strained, according to Western officials who say the militants have become wary of being too dependent on any one nation.