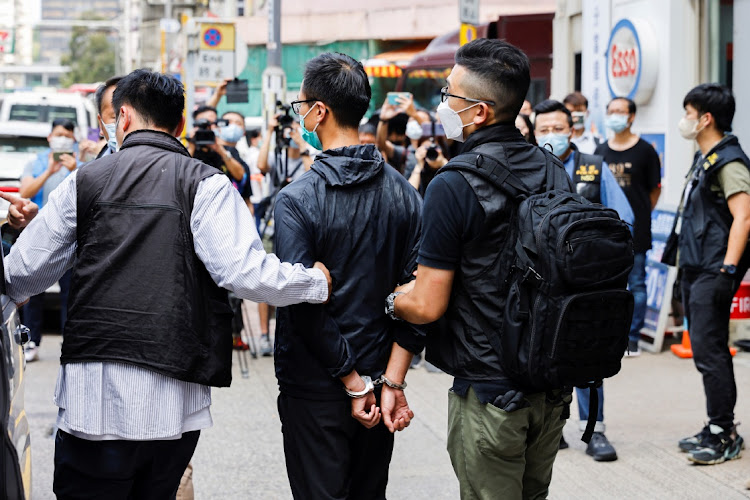 Leung Kam-wai, one of the arrested members of the Hong Kong Alliance in Support of Patriotic Democratic Movements of China is escorted by police as they leave after police search the June 4th Museum, which commemorates the 1989 Tiananmen Square crackdown, in Hong Kong on September 9 2021. Picture: REUTERS/TYRONE SIU

Organisers of an annual vigil in Hong Kong to mark the Tiananmen Square crackdown were in court after being charged with offences under a Beijing-imposed national security law, as authorities push ahead with a campaign to silence a group known for its support of freedom of speech.

The government accused them of inciting people to “organise, plan, commit or participate in acts by unlawful means with a view of subverting the state power, namely overthrowing or undermining the basic system of the People’s Republic of China,” according to court filings. The case against the trio has been adjourned to October 28.

The government gave no specifics, saying only that the offences had occurred since July 1 2020, the first full day that the security law was in effect. Chow and four others are also charged with failing to comply with a notice from national security officials to provide information.

Authorities in Hong Kong have been taking aim at people and institutions linked to the vigil, which drew tens of thousands of people annually. Ho, a former Democratic Party leader who sought the city’s top office in 2012, was among seven defendants who pleaded guilty in a separate court on Thursday to taking part in the event last year after it was banned and inciting others to do so.

Government officials blamed the prohibition on the need to prevent coronavirus outbreaks, but democracy advocates accused them of using the pandemic to curb freedoms guaranteed to the former British colony before its 1997 return to Chinese rule.

Also on Thursday, the city’s national security police searched the alliance’s headquarters, which also served as a museum. Police said they seized documents, computers and promotional materials, and froze about HK$2.2m ($283,000) of assets.

The decision to ban the peaceful Tiananmen vigil for the second straight year in 2021 has been seen by democracy advocates as confirmation that China has forever rolled back the freedoms it once allowed in former British colony.

The gathering in Victoria Park, in which tens of thousands of people held candles while listening to speakers urge an end to one-party rule, has become an enduring symbol of Hong Kong’s tolerance of political dissent.

At least 145 people - including journalists, activists and former legislators - have been arrested since China’s top legislative body handed down the security law in June 2020. The law bans secession, subversion, terrorism and colluding with foreign forces, and carries prison sentences as long as life in prison.

The US has sanctioned Chinese officials including CEO Carrie Lam over the crackdown.